Myanmar – Another name in the UN failures 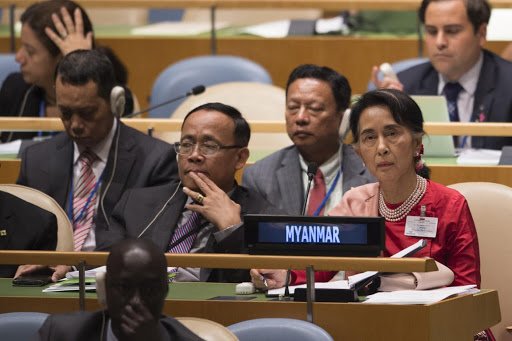 Myanmar, which was formerly known as Burma, was an erstwhile British colony that gained independence in 1948. With 135 ethnic groups, there is no official religion of the state, yet the majority follow Theravada Buddhism.

The Rakhine state, located on the western coast, comprises an ethnic Muslim community- The Rohingyas. The British forced them as labor from Chittagong Hills (in Bangladesh) and placed them in Myanmar, which today form this ethnic community, treated as illegal immigrants.

The political turmoil soon took over minorities after the 1962 Military coup, following the expulsion of Rohingyas from the citizenship list in 1982. The conflict between the community and the military soon took an ugly turn resulting in an exodus in 2017 and forcing around 700,000 people to flee either Bangladesh and India.

In the International arena, The United Nations sets an image of a messiah who will wear a cape and rescue the world from the arbitrary nature of the states. However, the negligence of this great intergovernmental organization opens the door for violence, even leading to genocides. Now unofficially, Myanmar also shares its name in the list of UN Failures with Rwanda, Sierra Leone, and Darfur.

Can organizations like The UN intervene and carry out solutions before things go beyond repair? Also, will the situation in Myanmar ever get stable? And, will the Rohingyas ever return? If not, then do we require another organization, yet mightier than The UN?

Factors Contributing to the failures

Winston Churchill said Success is stumbling from failure to failure with no loss of enthusiasm. However, when the defeat is systematic, it gets difficult to maintain the zeal. In Myanmar, something similar happened. Gert Rosenthal, Guatemalan former Foreign Minister, released an independent report, A Brief And Independent Inquiry Into The Involvement Of The United Nations In Myanmar From 2010 To 2018, in which he extensively narrates the failure of The United Nations as an organization that could have changed the picture way back.

The sociopolitical culture of Myanmar contributes as a crucial factor for its hindrance in handling the crisis. Ironically, Burmese leader Aung San Suu Kyi won the Nobel Peace Prize in 1991 but the politician inside her did not let the military stop committing any crime as the polls of 2020 were very much in the hands of the majority Buddhists.

The hyper-nationalism of the state is a major contributing factor. When Cyclone Nargis hit the region in 2008, The UN gave its first assistance and met with the military officials then. It clearly understood the environment and predicted unforeseen hindrances on its way. The staff always felt like being scrutinized and the trust deficit for the Government never let them openly take decisions in favor of the minorities at risk.

Myanmar’s economic growth is directly proportional to the heights of atrocities against the ethnic groups. Hence, The UN had to rope all three pillars, namely- Human rights, peace and security, and development.

The violent acts rose and divided the UN staff into two – one following quiet diplomacy and the others practicing outspoken advocacy. The former ones merely wanted to perform their usual assigned roles as few officials even revealed that the UN does not appreciate people to go beyond the boundaries already set.

Renata Lok-Dessallien, the UN Humanitarian Coordinator, was accused of stopping Human Rights activists to execute searches. And if people warned her of upcoming genocide signs, they were shown the door. David Mathieson, an independent reporter, told Al Jazeera that Dealing with UN officials during this period was like dealing with members of a dysfunctional Rich family who despise each other.

The officials who believed in outspoken advocacy raised their voices and condemned the Burmese Government’s actions. As a preventive measure, the Special Advisor to the Security-General persuaded the Burmese Government to sign ‘The Joint Communique’ where the Government promised not to carry any sexual violence in conflict. However, UN reporters later revealed that women were tied to the trees and then raped by the military men.

The imbalance between the staff and the heads poured more fuel to the fire and made things strenuous for Ola Almgren, the Resident Coordinator in Myanmar. The situation was presented to him as a puzzle by deliberately dropping a few pieces. Other than being understaffed, the three UN agencies were always at loggerhead and never coordinated with him.

This eventually paved the way for some other organizations like – IMF, The World Bank, and the Organization of the Islamic Republic (OIC) to help their Muslim brothers in distress.

Till 2006, China never admitted the boiling situation in Myanmar and vetoed the resolution introduced by The USA and The UK. Rakhine being a mineral-rich region is home to many ambitious projects such as – The Chinese Transnational Pipeline Project that connects Sittwe, Rakhine’s capital, and Shwe Gas field in Guangzhou. Meanwhile, even India financed and constructed a Sittwe deep seaport. So if a clear yet bulldozed land exists, it would create fortunes for Myanmar.

The UNICEF set up education camps in Cox Bazar to save a generation from being lost to ignorance. But unfortunately, the Bangladeshi Government refused to share the same curriculum that was being taught to their students. However, the agency made a course for them and even gave psychological support as well. Along with that, vocational training to the Rohingya youth is being provided.

The United Nations is one such institution in which the world has believed from time to time, but the negligence in Myanmar is non-pardonable. The organization should have acted towards a common goal rather than separate agencies competing under one umbrella.

Article 99 of the United Nations Charter states that The Secretary-General may bring to the attention of the Security Council any matter which, in his opinion may threaten the maintenance of international peace and security. This episode ultimately showed the unwillingness of the people on the 38th floor of The United Nations to carry out a solution for the Rohingya.

Hence, nations like China should leave their selfish motives behind and work for the common good. Ethnic cleansing is not just limited to a state but has a domino effect that strengthens the anarchic world even more. Also, there may exist an n number of mightier organizations than the UN, but if the muscle power intervenes everywhere, then the system is the problem itself.

Sakshi holds a B. A in Spanish from Jawaharlal Nehru University and is currently pursuing an M.A in Conflict Analysis and Peacebuilding from Jamia Millia Islamia.