Indigenous Communities of Latin America and their struggle for survival 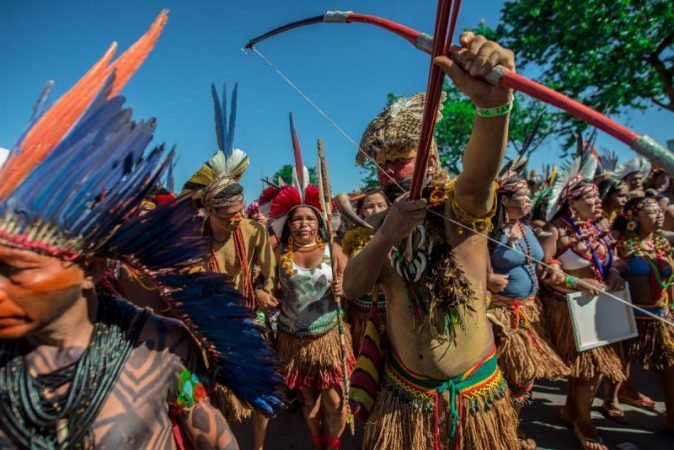 According to the World Bank, “Indigenous Peoples are culturally distinct societies and communities. The land on which they live and the natural resources on which they depend are inextricably linked to their identities, cultures, livelihoods, as well as their physical and spiritual well-being”.  No other community of people is struggling in this modern world the way the Indigenous people are trying to find a place to preserve their ancestral roots and identities. The World Bank study estimates that while the Indigenous community makes up to only 6 percent of population they safeguard 80 percent of world’s biodiversity. These communities live in remote and inaccessible areas such as Amazon forests, inner African forests and mountains.

The Latin American continent has a diverse, multi- cultural and multi- ethnic population. The United Nations Commission for Latin America and the Caribbean (UN ECLAC), estimates that the region of Latin America, Central and Caribbean is home for 45 to 50 million Indigenous population. Based on a population census in the region in 2010, “at present there are 826 indigenous people and 200 communities are living in voluntary isolation”.

Over 80% of the Indigenous population in Latin America is in Mexico, Bolivia, Guatemala and Peru, These Indigenous communities of Latin America are now facing threats of losing their individuality, culture and traditional values because of the trespassing of nation states to their territories in the name of development. The socio- economic underdevelopment and the inability of the communities to adapt to changing circumstances render them to be the most exploitative community in the human history.

During Colonialism, a section of people dominated the majority of people around the world using the might of arms and weapons. The policies used by these conquerors were guided by their mother lands rulers, who enjoyed absolute power. The colonial rulers interfered in the lives of people in colonies with the scientific backing of evolution. Colonizers used the explanation of civilizing the people in colonies as a justification for colonialism and the book also suggests that these logic of distinguishing people as civilized and barbaric was a tool for controlling their lives and thereby availing their lives cheap.

During that time, scientific explanations supported the myths of pure bloodline and ethnic supremacy. The New Spain “sistema de casta” was a method of policing and ranking citizens based on the bloodline. From this system different category of people emerged, such as “espanoles, criollos and indios”. Swede Carl Linnaeus nomenclature of classifying Homo sapiens into different categories based on the “climate or art” based on the places where people lived was used to reinforce the colonial belief and later Capitalist mentality of cheap lives.

The historical subjugation of the Indigenous people led to their socio- economic backwardness in the current context. Particularly in Latin American countries the nation states are trying to homogenous the citizens by revoking the special status of Indigenous communities and illegally occupying their lands. By doing so not only the communities are lost forever, with them we are losing the precious traditional knowledge associated with them.

The wildfires in world’s largest wetland “Pantanal”, Brazil in the early months of this year had created sensation around the world. President Jair Bolsanaro denied that the ‘deforestation process happening near the wetland was the cause of fires’ and also claimed that the fires were the consequence of hot temperature of the region and decaying of organic matter. The rapid deforestation process happening in many Latin American countries are in fact responsible for the wildfires in the region, but the reluctance of the authorities to acknowledge this fact and inefficiency of taking actions against them, affects the Indigenous community.

According to the National Observer site, the resource mining multinational companies of Canada and United States extract natural resources from the indigenous communities’ residential areas causing clashes between the companies and local people. In 2009, Mexican indigenous environmental activist Mariano Abarca was shot dead by a former Blackfire (Canadian mining company) employee. In 2005, the Rarámuri land advocates in the Sierra Tarahumara region in Chihuahua, Mexico were killed by the criminal organizations working for the illegal tree logging. The dead activists include Isidro Baldenegro López, a 2005 recipient of the Goldman Environmental prize.

The repeated assaults on the environmental activists from the Indigenous communities and constant denial of justice by the hands of authorities make them more vulnerable.

The persistent neglect from the historic times towards the Indigenous community in the Latin American region has affected their social exclusion from the mainstream society and eventually leading them to be victims of poverty and no health care facilities. According to the Economic Commission for Latin America and the Caribbean (ECLAC), there is 70 percent risk of an Indigenous child dying before the age of 5compared to a non -Indigenous child. Based on the remarks of HERALDO MUÑOZ, Regional Director for Latin America and the Caribbean of the United Nations Development Fund (UNDP), there are 400indegenous communities in Latin America and out of these communities the Afro- Caribbean descents have the low social security. Many are living on less than $1 dollar a day. According to him the ambitious Millennial development goal of the countries in the region will not be possible without the addressing these issues.

As the graph shows the level of poverty among the indigenous community in the continent remains stagnant though there were significant policies adopted by the respective governments.

The less accessibility to healthcare facilities to the Indigenous people makes them more vulnerable particularly in this pandemic situation without access to basic necessities’ there is a high chance of loss of lives among the communities. Of these people, the women, children and disabled people are more at disadvantage.  The mortality rates among the communities are very high compared to non-Indigenous people. According to an International Monetary Fund (IMF) report, children from the community exhibit high malnutrition rates. The report says “In Mexico, just 6 percent of children nationwide are underweight compared with almost 20 percent of indigenous children”.

According to the ECLAC regional studies, over 20% of Indigenous children aged between 6 to 11 years do not have access to right to education in the region. With the interventions from governments and international organizations the educational situation among indigenous community is improving. Based on the UNICEF report about 30% adolescents have completed their education from the community but many of them have low quality education. About 8 million people are being at the risk of excluding from the education sector in the region from the indigenous community. Education in the modern society have the capability of helping people from poverty yet The Indigenous people are left behind in this sector also.

In conclusion, with more participation from the respective governments of the countries in the Latin American region, NGO’s and International Community we can achieve a lot more than what is done so far. Not only will it help the Indigenous community it will be a common good for the society. The traditional knowledge and culture preserved by these communities are a significant part of the history of humankind. Their caring and nurture for the environment has maintained the balance of the biosphere. Therefore for the betterment of our tomorrow we need to protect them.