Cambodia – Another Battleground for China and India 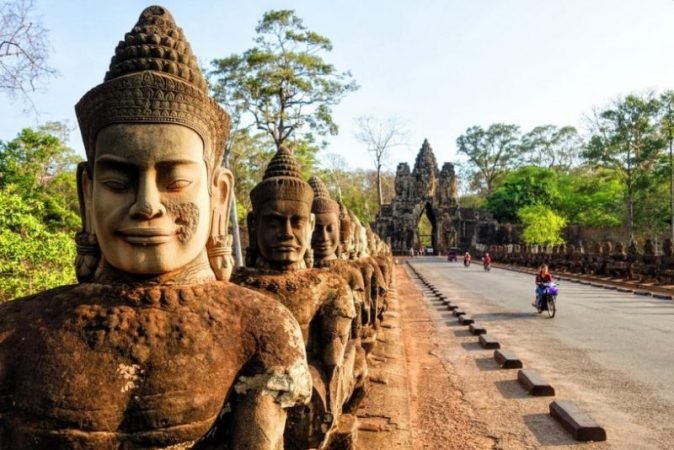 India has witnessed dramatic changes in its foreign policy in the last decade. Since the dynamics of world politics is changing drastically, India is transitioning from a neutral and mellow approach to more of a hardliner one, keeping in mind the need to boost India’s economy,  based on deals for the development of different sectors (trade, defence etc) in which both India and the partner nation both benefit equally from it. This approach is inspired by Prime Minister Modi’s clarion call at UNGA “Sabka Saath, Sabka Vikas, Sabka Vishwas”.  India’s shift from “Look East to Act East” is a testimony of how the nation is adopting an active approach to make its presence visible in every corner of the world amidst the rising tussle between nations. Connecting country’s underdeveloped northeast part to the Southeast Asian nations highlights how India is adopting a multilateral approach to connect with South-East Asian nations by building connectivity, developing cultural relations, inaugurating infrastructural projects, maritime defence deals and prosper its own northeast part and remove its economic and developmental isolation, while also countering China’s increasing footprint in the area.

India and Cambodia share a strong multidimensional bond. This relationship goes back to the historical ties that India and Cambodia share which are rooted in the civilisational links. These two nations have always tried to foster their relationship by constant efforts from both sides by the different governments. The common cultural and civilisational ties in the past include religious elements like Brahmanism, Buddhism, Pali and Sanskrit Language.  Although Cambodians today are dominantly Buddhists but strong influence of Hinduism, its rituals and mythology can be seen in their culture and architectures as well like Angkor Wat, Ta Prohm and other religious sites.  In the context of India’s ‘Act East’ policy and the ASEAN, Cambodia is a good prospective partner. In the 21st century, the relation between Cambodia and India was known to be friendly and characterized by many ups and downs during the cold war and after.  But these cultural- religious soft power approaches are now being overpowered by Chinese economic aid and its increasing influence in the region.

India Cambodia relations go back to the 1st Century AD when India’s Hindu and Buddhist religious preaching started spreading to the far east i.e. South East Asia. Cambodia is a living testimony of the cultural outreach of India. It has the biggest Hindu Temple like Angkor Wat.

Government of India also sent experts from the Archaeological Survey of India for the restoration and renovation of Angkor Wat temple from 1986 -1993. Another temple complex at Ta Prohm has a project going on. In 2018, India promised to help in the restoration of the temple of Preah Vihear.

The Mekong-Ganga Cooperation (MGC) is an initiative including six countries – India and five ASEAN countries, namely, Cambodia, Lao PDR, Myanmar, Thailand and Vietnam for cooperation in the area of tourism, culture, education, as well as transport and communications.

This project is an attempt to enhance cooperation in the fields of transport and infrastructure sector, including roads and railways as well as in science/technology and human resource management.

Under the Mekong Ganga Project, India has helped Cambodia in establishing the Asian Traditional Textile Museum at Siem Reap. In 2019, the Government of India has provided a grant of approximately $900,000 to implement Quick Impact Projects – an initiative started in 2015-16 to assist Cambodia in the field of agriculture, health, women empowerment, sanitation, capacity building and other crucial areas every year.

India and Cambodia cooperate in many multilateral and regional forums. India’s Act East Policy acts as a catalyst in that. India and Cambodia have had their formal diplomatic relations since 1952. In 1975, however, the ties were cut during the Khmer Rouge genocidal regime but then resumed in 1981. India and Cambodia are considered to be the architects of the nonaligned movement (NAM). The Policy of neutrality followed by King Sihanouk during the Cold war was very much inspired by India’s then PM Jawahar Lal Nehru’s Non-Alignment Movement and policy of respect for sovereignty, territorial integrity, neutrality, and non-interference. The King regarded Nehru as his elder brother. However, Cambodia has always been a little influenced by Communist bloc especially China.

India was one of the first countries to recognise the Phnom Penh government of the People’s Republic of Kampuchea. PM Hun Sen formally showed his support in favour of India’s permanent membership in the UNSC at the South Summit Conference in Havana in April 2000.

From non-alignment to alignment towards China: Shift in Cambodia’s Foreign Policy

Cambodia and Lao PDR are one of China’s closest allies. When more than half of the ASEAN countries are opposing Chinese aggression in the South China sea, Cambodia is moving on a different path, supporting China and side-lining the USA. It seems like Cambodia is giving preference to economic development over political rivalry originated by the sense of regionalism. Cambodia has no such complaint about territorial aggression by China. China has supported Cambodia economically always and in return, Cambodia has shown its support in favour of China and its policies. Cambodia also supports One China Policy.

Steven David coined the term “Omni balancing” which refers to the policies of third world nations.  Most of the third world nations are characterized by strong authoritarian leaders as their head. And to sustain their power, these nations tend to support strong nations in order to meet collective security goals and also to strengthen their position and power in their respective nations keeping aside long-term security threats that will be knocking at their doorstep in the future. This implies Cambodia also. Hun Sen has remained in power for a long time and aligning interests with China will help Cambodia in flourishing and fulfilling its economic interests.

China’s “debt trap” soft loan economic diplomacy is a boon for small nations like Cambodia. Recent years have witnessed a dramatic increase in this aid. Cambodia received $4.7 billion from China as grants and soft loans. Of Cambodia’s external debt amounting to $9.6 billion, 42% is owed to China.

The Koh Kong Project has drawn the attention of all the nations when Cambodia gave 45,000 hectares of its prime real estate in Koh Kong province i.e. 20 % of its coastline to private Chinese company Union Development Group, for the sake of tourism development – according to the official disclosure. In reality, the project, like the others all around the world, is helping China in fulfilling its military interests. It may also be helping in dealing with the South China Sea dispute and keep a check on Taiwan’s sovereignty.

Prime Minister Hun Sen’s affirmative attitude towards Chinese aid and considering it just an economic aid highlights about how Cambodia, in the urgent need of development, is bowing her head in front of an economic giant without realising its long term implications.

China has taken total advantage of India’s absence from the South East Asian region and has set her footprints in the region firmly while aligning her interests with the smaller nations in the name of economic aid and development. While India was busy in improving its relations with the West, it lost grasp over this highly undermined region. Not just in terms of resources found in the region but its geopolitical location and its significance in world trade have attracted the attention of various superpowers.

India’s Look East Policy failed to fulfil its major aim- to collaborate more and more with the South East Asian region. PM Narendra Modi’s transformation of Look East to Act East although has given hopes for closer collaboration and integration of the region with the North-East part of the country. But China’s aggressive and huge economic aid with easy return policy has attracted Southeast Asian nations to accept the offer in opposition to India’s soft power diplomacy approach which has no such great incentives and relies totally on religion and culture. India is running behind in terms of offering lucrative economic aid.  ASEAN’s growing economic integration with China and distancing from the USA has accelerated the concerns regarding the region’s sovereignty.