Britain Desperate to “take control of its Borders” 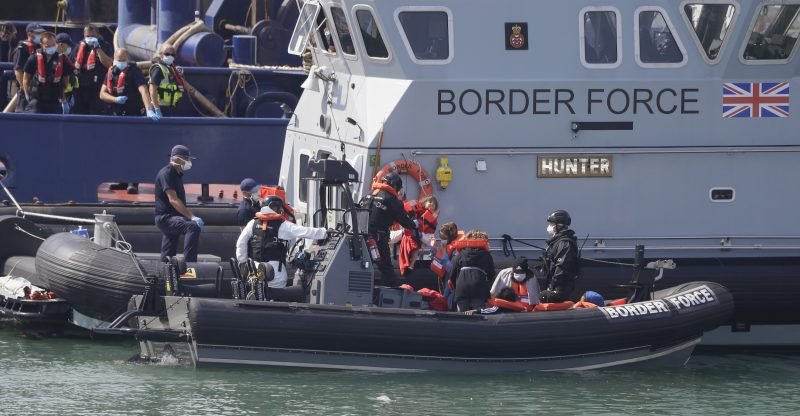 A Border Force vessel brings a group of people thought to be migrants into the port city of Dover, England, from small boats, Saturday Aug. 8, 2020. The British government says it will strengthen border measures as calm summer weather has prompted a record number of people to attempt the risky sea crossing in small vessels, from northern France to England. (AP Photo/Kirsty Wigglesworth)
PDF Button

Saturday saw almost 151 migrants crossing the channel into the UK, raising the total numbers to 4,100 since the beginning of this year. This prompted the immigration minister of the UK, Chris Philp to schedule a meeting with his French counterpart to introduce stricter measures regarding the problem. Mr Philp said the UK government wants to make the route across the Channel “completely unviable” so migrants “have no incentive to come to northern France or attempt the crossing in the first place”.

The migrants crossing the channel route navigate the world’s busiest ship route in the world in overcrowded rubber dinghies to flee the civil unrest, poverty and war-like situation in their home countries. Most of these migrants are hence from disputed areas like Syria, Afghanistan or Eritrea and fleeing poverty or war. In England, the number of these migrants are increasing with the warmer, more favourable weather, erupting tensions between France and UK on how to deal with the illegal route, 32 kilometres at its narrowest point, which is being exploited. The Home Minister of UK, Priti Patel has been very vocal about vowing to make the route ‘unviable’ and gives an ultimatum to France to step up its actions on French crossings unless it wants the home ministry to withdraw funds from operations in the French soil.

The main conflict between the French and British was the Britain accusation of France for not doing enough to prevent the crossing of fleeing migrants from the makeshift camps in Northern France, where they live until they find the perfect opportunity to cross the Channel. France has taken a decision to remove these refugee camps that have sprung up along the coast. Britain and France have also together decided to set up last month, a joint intelligence unit to facilitate a smooth flow of information regarding the people-smuggling networks. The French regional maritime authorities also supervise the routes on its side and make sure to retrieve and rescue any small vessel that is trying to cross over. The main interest of disabling the channel route for France is the belief that it will also face less influx of migrants with no option of crossing over to Britain.

Britain has also been making use of EU’s Dublin Regulation which helps it to return migrants and asylum seekers to the country they first arrived in the EU. The main problem with this law is that it will no longer be a tool for Britain as soon as Brexit is materialised and EU laws are obsolete for the country. Before that happens, Britain is eager to take control of its borders and curb the growing surge of arriving migrants. “You cannot just send people back to a country that won’t take them back,” says Colin Yeo, an immigration lawyer in conversation with the VOA news. “I think what the U.K. government would ideally like is to have some sort of arrangement where if somebody is intercepted in the English Channel, the assumption would be that they’ve come from France and therefore they are landed in France. But we don’t have that agreement at the moment, and frankly, it doesn’t seem that likely that we would enter into such an agreement with the French because it doesn’t necessarily appear to be in French interests.”

There has been another ongoing debate about the treatment of migrants who flee unfortunate circumstances in home countries by Europeans. These migrants are heavily exploited for political agenda and vote banks by nativist populist far-right parties, demonising them and calling them invaders. Prime Minister Boris Johnson has been accused for inflammatory language after calling migrant boat crossings a “very bad and stupid and dangerous and criminal thing to do”. The Refugee Council of UK highlighted the 1951 Refugee Convention which clearly states the rights of the migrants and the obligation of the States to protect them by tweeting, “there is no such thing as an ‘illegal’ asylum-seeker.” Lisa Doyle, the Refugee Council’s Advocacy Director, accused Boris Johnson of using “inaccurate and inflammatory language” to describe the plight of those seeking to reach the UK. “If there were more safe and regular routes in place for people seeking asylums – such as a strong resettlement programme, humanitarian visas and reformed family reunion rules – the number of Channel crossings would decline sharply,” the Council said earlier on Twitter.