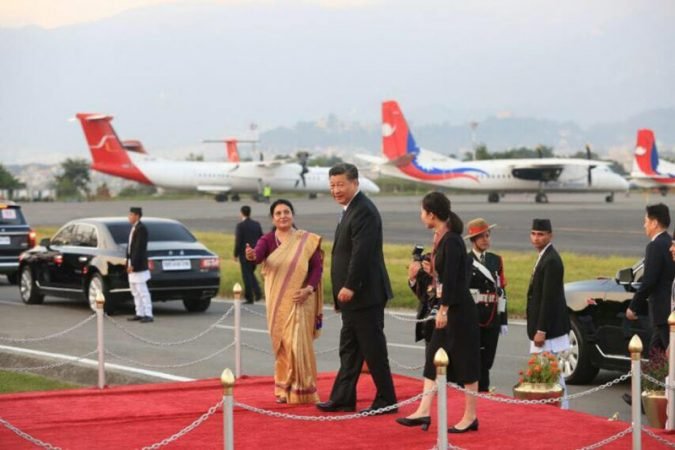 In recent days, there has been a fallacy in the Nepal-India relations after the Nepal-India border disputes that, Nepal is acting on the behest of China. Many have compared the ideological affinities between the Communist Party of Nepal (CPN) and the Communist Party of China (CPC). But the foreign policy of a state is more guided by the national interest than the ideologies of the ruling parties.

A few days earlier, an intra-party disputes rose among the senior party leaders of CPN, demanding Prime Minister KP Oli to resign from the post of Prime Minister and Chairman of the Party. Prime Minister Oli also condemned India for destabilizing his government and for the revolt brewing in CPN. Many political analysts also in Nepal have depicted this turn in events to be influenced by India. Amidst this intra-party dispute, Chinese Ambassador to Nepal Hou Yanqi has met senior leaders of CPN, and this meet has been considered important, and meaningful.

There is no doubt that the historical, strong and deep-rooted friendship between Nepal and India has turned sour and there has been a crack in the bond, which needs to be repaired as soon as possible for the mutual benefit.

But has China charmed Nepal? How much China is investing, where and how?

After many decades of political instability, Nepal has a politically stable government after the promulgation of the constitution in 2015. Nepalese have long dreamt for the development, and Nepal’s foreign policy has been also guided towards the development of Nepal. After the 2015 Indian Blockade to Nepal, Nepal has sought for alternative connectivity to China. PM Oli during his election campaigns has stormed Nepalese dream towards railway connectivity between China and Nepal. Later, the Government of Nepal adopted the motto of “Prosperous Nepal, Happy Nepali.”

In regards to the aim of Nepal’s development, newly upgraded Kalanki-Koteshwor eight-lane road of 10.4 KM, with two bicycle lanes and pavements is a marvel in Kathmandu’s traffic chaos. In addition to China’s supported small projects, Nepal and China have started high-level meetings and negotiations on projects to be executed under China’s flagship Belt and Road Initiative (BRI), which Nepal joined in 2017. Under the BRI framework, Nepal has reiterated her commitment to nine projects: the Kathmandu-Kyerung Railway, the Madan Bhandari University, the Galchi-Rasuwagadhi-Kerung 400 KB Transmission Line, the 762 MW Tamor hydropower project, the 426 MW Fukot-Karnali Picking run-of-the-river hydropower project, upgrading of the Rasuwagadhi Highway, the Tokha-Chahare road, the Kimangthan-Hile road, and a road connecting Dipayal with Tibet.

After PM Oli signed the Trade and Transit Treaty with China in 2016, China has become a significant player in Nepali politics and the economy. China has been significantly at the top for four consecutive years in the list of foreign direct investment pledges. Millions of Chinese tourists have visited Nepal; after Hongsi Cement another Chinese cement factory is in the process of establishing a plant with an investment worth US $140 million. Other than providing scholarships to dozens of students, China also facilitates study tours for hundreds of Nepali civil servants, security personnel, politicians, civil society members, and journalists.

Chinese aid has also increased. China has pledged the US $483 million for post-earthquake reconstruction. China is assisting 25 reconstruction projects, including Durbar High School and Basantapur Durbar. Part of the assistance is in the form of Rs 2.5 billion to the Nepal Army to support humanitarian assistance and disaster management.

In a visit in 2019 by China’s President Xi Jinping, a 20 point agreement was signed celebrating a Trans-Himalayan Multi-dimensional Connectivity Network (part of BRI) as changing Nepal “from a landlocked to a land-linked country”.

Looking at the past, China’s investment in Nepal was marginal compared to India. In 2014, China outranked India for the first time in terms of total investment. China’s active outreach to Nepal in recent years has been partly prompted by India’s increasing force posturing along its border. The blockade of India in 2015 was a turn in the events for Nepal’s search for alternative against trade dependency towards India and increasing Chinese assistance towards Nepal.

There is no question regarding India’s assistance towards Nepal, and both the states celebrate their strong friendship. But the erosion of trust at the political and people level, and the border disputes between the two states have leveraged China’s official development assistance to take over. Indian development projects have been criticized for not being able to deliver at the time, and many hydropower projects, railway connectivity, road constructions and others have been delayed.

Despite substantial declarations regarding development assistances, India continues to send mixed signals. In terms of the land and air connectivity, the response has been lethargic: the time for providing Nepal access to Vizag Port and new air paths is two years. Nepal’s demand to access India’s west ports is at a nascent stage and will take some more years. Indian PM Modi has hit all the right chords in his talks, but India is unwilling to collaborate on power trade with Nepal in the way Nepal would like it to or provide electricity at lower rates. The note that Nepal remains India’s “client state” will not be supportive of the aims of working towards cooperation. India must verbalize a united approach towards Nepal to redirect the existing veracity.

Though there has been an improvement in the bilateral projects in the recent years, the bilateral hiccups between Nepal and India and the increasing development projects of China with substantial results have overshadowed India’s efforts and Nepalese people are charmed by the Chinese efforts.

More professionalism, speedy work, and identification and addressing of the bottlenecks in existing bilateral projects can help India to increase its soft power in Nepal with an increase of trust and brotherhood between two states. China is winning “hearts and minds” in Nepal through generous strategic assistance. And China has been continuing the “use of economic diplomacy as the foundation of its foreign policy.” Thus, the way forward for India would be to advance from its utterly traditional security angle towards Nepal and be proactive with innovative strategies and policies.