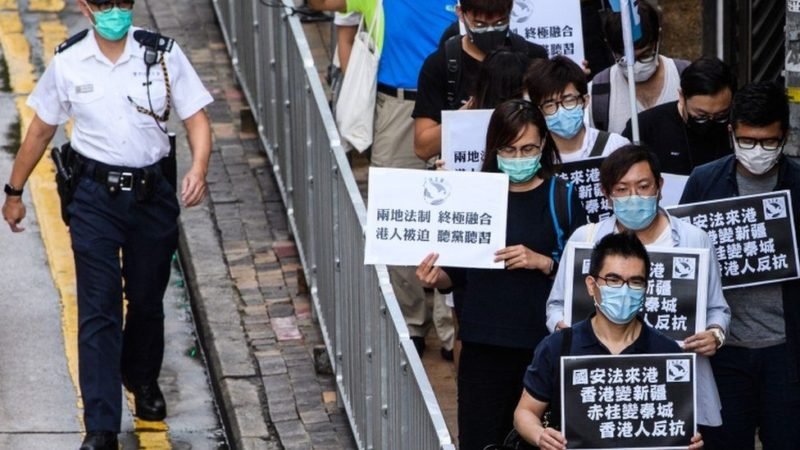 On 28 March 2020, deputies of the 13th National People’s Congress (NPC) of People’s Republic of China voted prodigiously in support of the decision on “Establishing and Improving the Legal System and Enforcement Mechanisms for the Hong Kong Special Administrative Region (HKSAR) to Safeguard National Security” at the concluding meeting of the NPC annual session.

The law is preordained to criminalize separatist, subversive and terrorist activities, along with foreign interferences in Hong Kong. The Chinese Foreign Minister Wang Yi mentioned it as an entirely internal matter of China and would take necessary countermeasures if external forces interfere in Hong Kong affairs.

Some have argued that China’s propose to act National Security Law in HKSAR may cause short-term market instabilities, however, will result in long-term stability for the international financial hub. Nonetheless, some have questioned Hong Kong’s autonomy and China’s attempt in creating broad powers to suppress unrest, and accused of threatening the rule of law and human rights.

US Secretary of State Mike Pompeo declared in Congress that Hong Kong was no longer autonomous from China, and stated the US may annul a special trade status with Hong Kong. Still some states like Russia, Democratic People’s Republic of Korea, Serbia and others have supported the law.

Likewise, Nepal has supported new security regulation for Hong Kong. On June 3, 2020, Spokesperson of the Ministry of Foreign Affairs of Nepal, Bharat Raj Paudyal made it clear that Nepal upholds “One China” policy and considers Hong Kong as an integral part of China, and added that, maintenance of peace, law and order is the primary duty of a state. Before Nepal’s official stand on the legislation, Spokesperson of the Embassy of the People’s Republic of China in Nepal, Wang Xiaolong ensured the safety and welfare of Nepalese living and working in Hong Kong.

This move by Nepal is driven by its fundamental objective of foreign policy, which is mutual respect of each other’s territorial integrity and sovereignty, non-interference in each other’s internal affairs, and adherence to the policy of non-alignment and neutrality.

Particularly in the case of China, Kathmandu is showing its firm commitment to the “One-China” policy and is also ensuring not to allow its soil to be used for any inimical activities against China which is an immediate neighbour of the Himalayan state.

However, among the Indian side, it has been taken as a diplomatic shift towards China after a recent Nepal-India border dispute. Further, Nepal has also been accused of being pro-China, and ideological affinities have been mentioned.

It has been taken by the Indian side that this decision to support China’s legislation over Hong Kong came amidst a time when Nepal’s relation with India is under stress over the boundary question.

Nonetheless, Nepal has adhered to “One-China” policy since very long. The prominent examples of Nepal’s commitment to the policy can be seen during the Tibet and Taiwan issues in the past, and also during the 2015 Earthquake where Nepal did not accept the help or relief directly from Taiwan.

Moreover, during China’s President Xi Jinping’s official state visit to Nepal in 2019, Prime Minister K.P. Oli had assured him of Nepal’s commitment towards the policy.

Nepal and India have excellent bilateral ties and deep-rooted friendly relations, and it shouldn’t affect based on its policy towards another neighbour. Neither it should see this as a shift in Nepal’s position based on ideological affinities. The foreign policy of Nepal towards China and India is the same, regarding the policy of non-alignment and neutrality. Also, Nepal has a strong commitment towards the UN Charter and has believed in the pacific settlement of disputes.

While the government in Kathmandu stress to resolve border issues through bilateral means without any external influence, hence, the future of bilateral meetings should not be placed into diplomatic and political risk through such assumptions. Rather the two states must build trust amongst each other for resolving the dispute as well as for more enhanced bilateral cooperation in future.