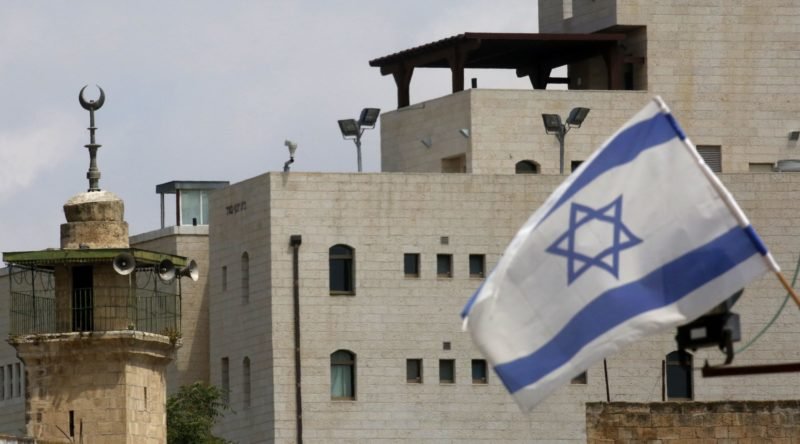 An Israeli flag is pictured near the minaret of a mosque at an Israeli settlement in the the old city of the West Bank town of Hebron /Image source: HAZEM BADER/ AFP/Getty Images)
PDF Button

The visit of Mike Pompeo to Jerusalem amidst this pandemic on 13th May has been explained by the US administration in a short statement, to discuss “US and Israel efforts to fight the Covid-19 pandemic, as well as regional security issues related to Iran’s malign influence”. In an interview with an Israeli newspaper, Israel Hayom, the US secretary of State himself said that the trip was intended to meet the two leaders of the ‘Unity Government, Benjamin Netanyahu and Benny Gantz “face to face” to update about the “Vision for Peace” of the President, Donald Trump. Put it in nutshell, this peace vision and the said update seem to be a roadmap for the annexation plan of West Bank underway for some time. Given the pandemic situation and the delicate security condition in the region, what are the potential impending implications of the Israeli annexation with US support policy.

The Palestinian Authority has outrightly rejected the Trump Peace Plan and declared that the US is no more an honest and impartial mediator. The US regional allies might be fatigued with Palestinian question and like to align with Israel in order to balance Iranian threat. But any support or silence of acceptance of such an unpopular plan will be a huge public humiliation and politically very unsustainable. The recent public criticism of the Saudi-owned channel (MBC Network-comedy series called “Exit 7), presenting Israel better over the Palestinian forced the Saudi king, Salman bin Abdul Aziz, to reiterate that “The Palestinian issue was and is still the Arab and Muslim central issue and the first priority for the kingdom since its inception as it rejected any measure or type of occupation of Palestinian territories and stood steadfast by the side of the Palestinian people.” Thus the expansion plan of the new unity government in Israel in the West bank can bring the intractable Palestine question at the centre once again.

The US drawdown process has already pushed its Arab allies in a state of unprecedented doubt about the US commitment about their security. The US policy of “Maximum Pressure” has increased the Iranian bellicosity and its impending threats towards these states. The pandemic has hit hard to their oil-based economies and their economic recovery needs strong US presence and supports more than ever before. But the announcement of the removal of the four batteries of Patriot missile and anti-missile defence system at this juncture must have put the allies into an acute security dilemma and a new scramble to adjust into the new setting. A rush to carry out the plan is wrought with very dangerous repercussions.

The annexation will be the biggest prestige and political loss of Jordon. Any acquiescence on the part of Jordanian government will be untenable.  It has already responded sharply that the West Bank annexation will put the Israel-Jordan peace treaty into a deep freeze and cause numerous attendant consequences. Jordan’s king has warned that if Israel continued with the plan, it will have “massive conflict”. In such a scenario, the proposed annexation can provide Israel strategic military position but will poison the peace pockets for itself in the region. The armed peace carries its own hazards and cannot sustain the vagaries of power shifts of the world order.

The US views that rejection of Peace Plan by Palestinian Authority has given Israel the right to implement a part of this very detailed and realistically implementable concept. Israel is trying to replicate its ‘Golan Heights’ strategy in the West Bank. In 1981, the Israeli government declared application of Israeli jurisdiction, administration and law in the ‘Golan Heights’. Despite being part of many negotiations, ‘Golan Heights’ was declared as a sovereign part of Israel in the thick of Syrian Civil War and the fierce conflict in the region with President Trump’s announcement in March 2019 that the US would recognize the Israeli action. The Israeli government has unveiled a new settlement there as “Trump Heights” as a mark of gratitude and honour to President Trump for “his decision to recognise Israeli sovereignty over the territory.

Israeli must be planning for a similar trajectory in its annexation plan in the West Bank. The Trump presidency has strengthened Israeli grip with one after another policy support and proportionately weakened the Palestinian position. As per the unity government agreement, the issue of extending Israeli sovereignty over 30 percent of the West Bank, the allocated portion according to the US Peace Plan, can be brought before the Knesset for vote from 1st July 2020 onward. But it needs to satisfy two preconditions of full agreement of the United States and broad agreement of the international community.

The Plan has received considerable opposition and objection in Europe. Last February, twenty-one EU countries came out against both Trump Peace Plan and West Bank Annexation. The Pompeo visit and its goal have been received with concerns and possible action in Europe. As per the reports, EU countries are considering punitive response against Israel if it goes ahead with the plan. It includes countries like France, Belgium and Ireland. After the ‘Virtual Meeting’ of EU foreign ministers, the EU Foreign Policy chief, Josep Borrell, said that the block will use its clout to prevent unilateral action and added “We must work to discourage any possible initiative towards annexation.” Thus it entails the potential of putting Israel’s position of gains in peril in the international scrutiny and response.

Such a coalition government based on such an awkward agreement commitment to annexation is not only a dangerous threat to a rule-based international order but a sure spark of intensifying instability and insecurity in this turmoil-torn region. This will make the US position of rule-based order in the other regions of contest like the South China Sea and larger Indo-Pacific against the Chinese policies and aggressive pursuit untenable. This may put its waning credibility into a steep fall and face a new network of challenge in the post-pandemic times.

It will reverse the gains of peace treaties and processes Israel has earned so far in the region and may take it back to the hostile block of Arabs of the previous century. Israel must adopt a position of a rule-based international order and must replace the hazards of unilateralism with the consensus and cooperation of multilateralism. It has already created substantial convergence of interests with the Arab capitals in the region. Potential easing of US-Iran tension gradually may revive its strategic convergence of pre-revolution Iran. A pragmatic and inclusive “Periphery Doctrine” based on both Arab and non-Arab in the region can bring a desired long term security of Israel.