Should India mediate in the Israel-Palestine dispute? 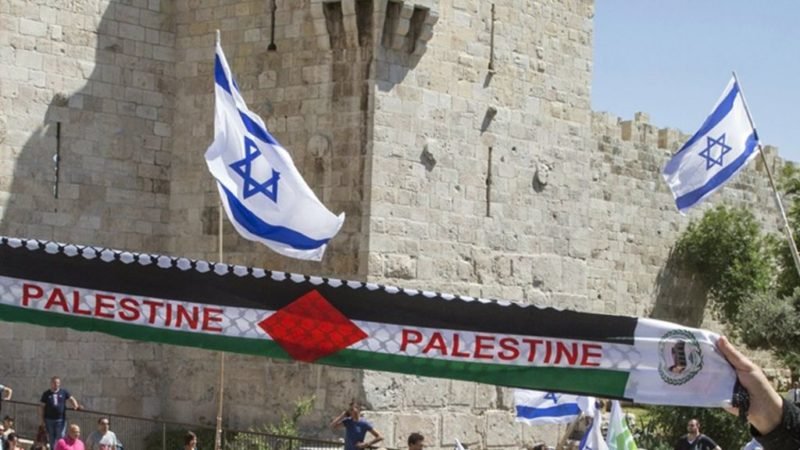 Recently, the United Nations invited India to mediate in the Israel-Palestine dispute. This has sparked a debate in diplomatic circles and think tanks in the country about whether should involve itself in such a crucial issue of international importance.

The Israel-Palestine conflict is a territorial conflict between the Jews and the Arab Muslims regarding the land of Jerusalem, which both sides lay claims upon. The Jewish Israel, which occupies the region currently, advocates for ‘an undivided Jerusalem’ as its capital. The Palestinian voices, on the other hand, are divided on the issue. Some advocate for a division into two countries while others advocate for a complete accession of the land by the Palestinians and removal of all Jews from the region.

The land of Jerusalem has religious sites sacred to both the Jews and the Muslims. Many organisations including the PLO and Hamas appeal to the people to do ‘Jihad’ and ‘save’ Islam by liberating the region from Israeli annexations. This leads to armed protests which attract severe Israeli military response, resulting in casualties and further destabilisation in the region.

The very fact that this matter is linked to religion opens up the scope for mass involvement of Islamic groups from all over the world. Any consequence of this matter which goes contrary to the expectations of the Muslims will attract universal resentment and possibly violence. The recent escalation in the tensions between Israel and Iran only raises further concerns. The tensions between major powers like Israel, the US, Iran, Saudi Arabia and other stakeholders in the issue will disturb the overall dynamics of the region and consequentially, the whole world. Thus, this matter is indeed of grave concern and should be dealt with extreme caution and instinctive response.

All efforts by the United Nations and the major powers like the United States and Russia have not been able to negotiate a peace deal. This is primarily due to the fact that the Arab world views the US and its allies as illegitimately favouring Israel, which to some extent is correct. Any efforts by the UN and its agencies which go against Israel are mostly vetoed by the US resulting in status quo. For instance, the condemning of Israel’s transfer of capital from Tel Aviv to Jerusalem by the 14 members out of the total 15 members of the UNGA which resulted in the passing of the United Nations General Assembly resolution ES‑10/L.22 (which declared the status of Jerusalem as Israel’s capital as “null and void”) was vetoed by the US. Thus, all efforts to resolve the conflict ended in a stalemate. Amid such concerns, the invitation of the United Nations to a country like India, which is deemed as independent and unbiased, for mediating in the should be welcomed.

But, Why only India?

This is answered by the relations that India maintains with countries through its unique foreign policy. India is credited with following a de-hyphenation policy with Israel. De-hyphenate, in international diplomacy, means having an independent relationship with a particular country, irrespective of any other country getting offended. Basically, it means having a strategic relationship with a country, keeping our own interests in mind. On one hand, India imports modern fighters and other strategic arms from Israelis and on the other hand has successfully established the strategic Chabahar Port in Iran for India’s exports, Saudi Arabia is India’s second-largest oil supplier, only after Iran, thus maintaining relations with the Arab world as well. Such are India’s unique relations that put it in a unique position to mediate and have sparked the UN invitation for mediation.

Is it in India’s interests to mediate?

In today’s world where diplomacy has become increasingly complex and interrelated, such invitations should be welcomed. India should hereby take an example from the United States. The United States, in its early years, was focussed upon its policy of non-involvement in world politics and solely focussed on its internal matters. But, it eventually realised, after the Second World War, after the development of structural realism, that no major country could exist in diplomatic isolation and it has to exert its influence in order to guard its interests and enforce peace deals and negotiations abroad, in its interests and the overall interests of this world. This change in policy has been a major factor in its transformation into a world power. Taking an example, India must understand that it should come out of its shell and contribute to this world by negotiating crucial global peace deals

War in the Middle East blocks its oil supply and its ambitious exports to the west via Chabahar port. Moreover, Indian nationals living in the region, who are a major source of foreign exchange, may be threatened by any war. If violence follows, India will have to airlift such citizens which will be a troublesome process and involves risk. Further, it would result in blockage of a significant portion of foreign remittances received from the Middle East. If wars follow, the already ‘in-crisis’ Indian economy is bound to collapse for it is closely linked with the region for oil supplies and import-exports. The emergence of any spontaneous new threat to India’s interests cannot be ruled out. A successful resolution will support India’s standing in world politics and would ensure that India has a say in world matters. Interestingly, by such successful resolution, India may advocate its long demand of being recognised as the sixth permanent member of the UN and its membership to the NSG. A peace treaty will also result in proving India’s regional superiority in times when we have tough rivalries from our neighbours, China and Pakistan. Therefore, India has also its interests in a successful resolution of the matter and thus should accept this invitation and mediate between Israel and Palestine.

Would such mediation not lead to deterioration of relations with at least one side?

The precedent answers in the negative. It has to be noted that India has not been completely ignorant about the Palestinian issue and has stood for the Palestinian cause for long. It voted against Israeli interests in 1948 and gave it recognition in 1992. It is useful to note that India voted in favour of the resolution titled “The right of the Palestinian people to self-determination” at the UN General Assembly’s Third Committee. But, still, even after such steps, India has successfully maintained friendly relations with Israel. This is particularly due to the fact that India is a major importer of Israeli arms and Israel cannot afford to lose India, which is the world’s biggest potential arms buyer, as its ally. Thus, we should not expect a very harsh response from Tel Aviv if the results of such mediation do not come in its favour.

Also, as far as the Arab world is concerned, they will welcome mediation by India rather than America backed the United Nations and its subsidiaries. This will lead to wider Indian acceptance among people of the Arab countries and India may consequently push India’s concerns of combating terrorism amid other interests.

What if India rejects the invitation?

In such a case, the resolution of the matter by the UN and its agencies is an unlikely outcome. The recent escalation in tensions between Iran and Israel raises fears that the matter will only boil to get worse. Calls about the destruction of Iran and the subsequent statements that “Tel Aviv shall be razed to the ground” are all conclusive of the fact that status quo will change only for the worse. The recent shift of Israeli capital to Jerusalem is all set to attract backlash from the Arab world. Nuclear threats may also start an ‘arms race’ in the region. Overall, the state of affairs in the region is not supportive of the peace process.

Taking into mind, the interests involved in the area, India should take an active part in the conflict resolution process. However, such mediation process has to be done with caution. It is obvious that there will be intense pressure from both sides and it will be a challenge to act as an unbiased mediator in this issue. Any biasedness or negligence on India’s part may lead to a backlash in the Arab world and may raise movements against India itself. India must guard its ‘clean’ image in world politics and not let the United States intervene in its proceedings. This is indeed possible with such strong government in the centre and availability of diplomatic geniuses at appropriate posts presently in the Indian diplomatic system (Ajit Doval and S Jaishankar, for e.g.). India must not step back from accepting this invitation due to the severe pressure or the consequences that may follow. Instead, it should accept this as a challenge for ensuring its stand in world politics and maintaining regional diplomatic superiority.