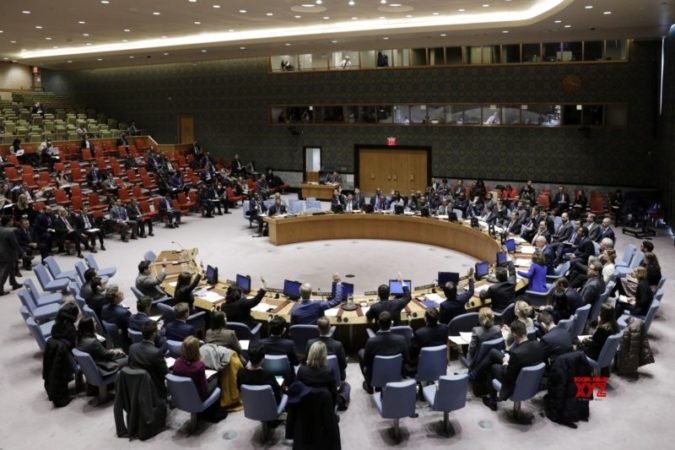 Building upon the recent analysis of the IFIMES (International Institute of the Special Consultative Status with the UN Eco-Soc) and its call for a formidable multilateral action; “The International Security Dimension of Covid-19 and the Pivotal Role of the UN SC”, the founder and CEO of the London-based think-tank furthers that argument while explaining why the non-permanent members of the UN Security Council should indeed take a lead.  Hereby, we bring her policy proposal in its full length.

The United Nations champions multilateralism but is often criticised for “doing everything and doing nothing” and has been denounced for the lack of a rapid and appropriate response to global challenges. “We have discussed COVID-19 every day since 13th March,” reassures one U.N. diplomat, but so far, the response has been ideological communiqués rather than pragmatic propositions or resolutions to collectively combat the effects of the pandemic.

On 23rd March, despite his “limited freedom” the United Nations Secretary-General António Guterres, strategically called for a global cease-fire and an aid package for the most vulnerable, which was praised as the most serious proposal that has emerged since the pandemic. Additionally, the 193-member General Assembly this month passed a non-binding resolution that called for “intensified international cooperation to contain, mitigate and defeat” the Coronavirus.

Despite the “archaic views of a few members on how the Security Council should work”, this month, the Council, under the Presidency of the Dominican Republic, implemented the working methods prepared by the previous presidency to start Video Teleconferences (VTCs). “The pandemic forced us to develop working methods that have allowed us to carry the agenda despite the difficulties of not being able to physically meet,” said a non-permanent member of the Security Council triumphantly. While it is helpful that the members can now talk to each other after several weeks, many businesses and institutions implemented similarly ground-breaking technological innovations overnight!

After much resistance, particularly from China and South Africa, the Security Council had its first closed-door virtual meeting on 9th April to discuss the COVID-19 crisis. While this is good progress, there are significant barriers to any action, “It would be very detrimental for the UN SC to make its discussions on the pandemic public as that would demonstrate that its structure does not allow it to go beyond the vetoes of the permanent members (P5),” said a Latin American diplomat. In particular, the increasing tensions between the US and China have truncated any meaningful outcome, “They are in the middle of an ideological and strategic war,” continued the diplomat.

And yet, as the crisis deepens, negotiations on a possible resolution appear to be moving forward. Just as one draft resolution negotiated between the P5 stalled, another resolution between the non-permanent members was put forward, and currently, all members are negotiating both resolutions as a single document. The finger-pointing and wording disputes between the US and China persist and, while France is working to smooth this relationship, new disagreements have emerged around the possibility to include in the resolution, the relaxation of unilateral sanctions against countries that have been heavily hit by the pandemic and need aid, such as Iran. Considering the scale and gravity of the pandemic, the fact that the P5 and the Security Council, in general, are getting bogged down on lexical semantics, is unacceptable.

The Presidency’s role is primarily to guide and align the Council, and within its limitations, the Dominican Republic can play an effective leadership role in handling an international crisis of monumental proportions. “What would be required for such a leadership role are qualities of clear-sightedness, level-headedness and outstanding diplomatic skills, among others,” said a senior Asian diplomat.

As part of this month’s agenda, the Dominican Republic launched an open, high-level VTC entitled, ‘Protection of civilians from conflict-induced hunger’. While the event had been planned for months and the agenda already set, the Presidency successfully shaped the conversation to not only cover food insecurity and conflict-related starvation but also to include discussion on the related security impacts of COVID-19, for example, through disruption of food supply chains.

The response from the virtual attendees was remarkable, with all the briefers and interventions from different countries including consideration of the threats multiplied by the pandemic. For example, the Director-General of the Food and Agriculture Organization (FAO), Qu Dongyu highlighted COVID-19 as one of the ‘shocks’ together with conflicts, extreme weather, desert locusts and economic shocks that are likely to “push more people into acute food insecurity”. The Presidential Statement of this event will hopefully produce a unanimous message on hunger and conflict, a much-needed sign of unity to identify common problems and seek common solutions.

This outcome could be an encouraging step for the Dominican Republic to assume greater leadership around the impacts of COVID-19 and its effects on international peace and security for the remainder of the month. The Latin American nation should seek to conclude its Presidency by helping the Security Council to focus on the gravity and wide-reaching nature of the situation and work together on a resolution that directly addresses the threats of the pandemic and offers pragmatism in the management and the recovery, even if differences between the P5 persist. “The global pandemic presents both a challenge and an opportunity for a small Caribbean member state of the world body to demonstrate a much-needed leadership role to mobilize the international community to effectively combat COVID-19 and spare the world from further untold tragedy,” said an optimistic veteran of diplomacy.

The Caribbean nation will finish its Presidency at the end of April and while there are only a few days left, its diplomatic skills will be put to the test in the coming days at other important events including one on 27-29 April for the “Intergovernmental Negotiations on the Security Council Reform” (IGN) where five points of convergence and disagreement will be debated: 1) categories of membership to the Council (i.e. permanent, non-permanent, or a third option), 2) the question of the veto, 3) regional representation, 4) size of an enlarged Council and working methods, and 5) the relationship between the Council and the General Assembly.

Each bloc of states (the S5 Group, the G4, the African Group, the L.69 Group, the Arab Group, Uniting for Consensus, the Caribbean Community, etc) have different positions, agendas and vision; “it’s a Tower of Babel’, assured a UN diplomat, “without forward-looking conditions, we will not advance the debate”. During this debate, the Dominican Republic could proactively try to reorganise the fronts between all the different positions of the UN regional groups and mark certain lines in the negotiation process.

The Dominican Republic could provide the same guidance to its own regional group within the United Nations, the Latin American and Caribbean States Group (GRULAC), which is considered “non-functional” due to its internal ideological struggles. “We must rebuild, remove the regional groups from their ideological struggle and make it a place where a conversation and eventually a consensus can be generated”, reflected a diplomat of a GRULAC member state. The Caribbean nation, through its prominent role in the Presidency, “has the platform to propose an initiative that would put a specific work agenda in place as a mechanism for consultation and agreement rather than as a mechanism of ideological confrontation,” explained the same diplomat. Another Latin American diplomat agrees that there is an opportunity for the Dominican Republic to show leadership, “the Dominican Republic ambassador could be a valuable interlocutor if considered as a sensible person and not seen as a threat to other activities within the Security Council”.

The pandemic and its effects have laid bare the importance of decisive, visionary leadership and concerted action in such a critical point of human history and also provides an opportunity to the international community and its leaders to galvanise the process of change where multilateralism, compassion and social consensus are no longer a policy of choice.

Elizabeth Deheza is a founder and CEO of the London-based, independent strategic intelligence entity DEHEZA, focused on Latin America and the Caribbean.