The ‘Blame China’ Treatment Will Not Cure Your Coronavirus 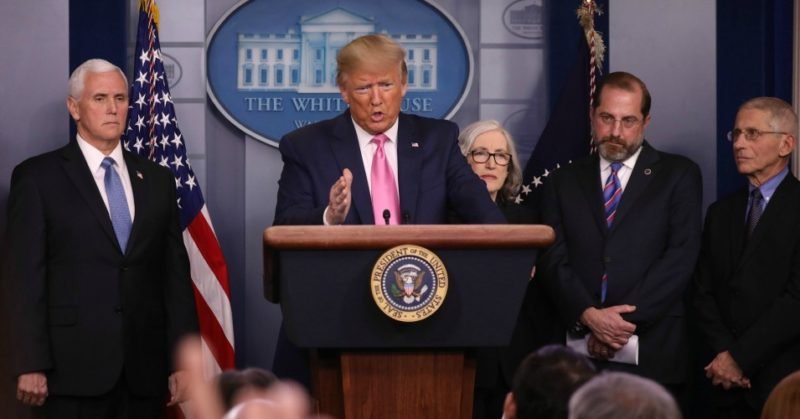 The number of hate crimes committed against Asians is rising at alarming levels in the United States of America. Many Americans no longer show restraint when posting racially-charged comments about the Chinese on their Social Media accounts. US Secretary of State Michael Pompeo has printed the phrase, “Wuhan Virus” when submitting official diplomatic documents to China’s Foreign Ministry. And now US President Donald J. Trump has issued a warning that Washington intends to freeze funding for the World Health Organization (WHO) over perceptions they are acting “China-centric” by helping Beijing to contain the COVID-19 outbreak.

The number of confirmed coronavirus cases has surged above 400,000 with over 10,000 deaths reported in the US. One would expect Washington officials and Americans to be humbled by the devastation wrought by the pandemic. The US can boast of having the highest quality medical care facilities in the world while having the largest GDP (gross domestic product) at well over US$20 trillion. The nation stands tall as the sole superpower and yet the US will likely suffer from having the most cases of infections and deaths from the COVID-19 outbreak when everything is said and done.

How could that happen to the mighty American Empire? An invisible enemy has struck them harder than any other country, including China, where the virus started to spread in the city of Wuhan, central China’s Hubei Province as early as December last year. Lest we forget, the Chinese were enduring hard times in February and March with the Western media forecasting an imminent regime change to come and the exposure of China as a failed state and paper tiger.

Ironically, the New York Times was publishing claims that Beijing officials were refusing to hold direct communications with WHO officials in February. That’s why it’s surprising to learn that US politicians are scrambling to denounce the WHO for being “China-centric.”But for the record, no organization is perfect and when President Trump announced a travel ban on all flights from mainland China, in hindsight we see the White House made the right decision.

Nonetheless, the WHO and Beijing officials were delivering strong messages to the world in January that the coronavirus could become a deadly and contagious virus that may spread across the globe. The Wuhan lockdown, starting on January 23, sent a clear signal that all sovereign governments must stay alert and make preparations to contain the COVID-19 outbreak before it mutates into a pandemic.

In regards to the White House travel ban on China, the US State Department allowed for loopholes. US flights from the ‘Special Administrative Regions’ of Hong Kong and Macao were still permitted. Consequently, many Chinese were taking flights from there and in February and early March US airports were not conducting health screenings on inbound international travellers. Washington blundered by allowing HK and Macao flights when the coronavirus was ravaging the Greater China region.

The animosity towards the Chinese is reaching a crescendo of rage as more and more people are pointing fingers at Beijing for the COVID-19 outbreak. Well in a moment of grave crisis, people either take actions to resolve the problem or they lament their fate and search for scapegoats.

So let’s analyze India and the US response to the coronavirus. Indian Prime Minister Narendra Modi had taken immediate actions to contain the COVID-19 outbreak when it had begun to spread in his country. He did not go on Television to deliver speeches denouncing Beijing over its alleged mistakes. He took responsibility and set up lockdowns, quarantines and imposed strict travel restrictions. The Foreign Ministry halted issuing visas for visitors and blocked international flights. New Delhi had also forbidden “Made in India” medical supplies for export to overseas markets.

PM Modi had made some mistakes, such as placing the lockdown too quickly, while forcing many impoverished migrant workers to walk hundreds of miles on foot to return to their domiciles of residents. Nevertheless, Modi’s fast action approach without shouting at China was much better than President Trump’s disorganized response.

A few weeks ago the Trump administration was dismissing the COVID-19 as nothing more serious than the flu. Only the State of California was taking urgent actions to stockpile on medical supplies for hospitals and to impose a statewide quarantine, calling for all Californians to remain indoors, except out of necessity. Governor Gavin Newsom has emerged as an unsung hero.

But Washington had an opportunity to seize the moment to protect lives by calling for all 50 states to take similar lockdown measures as California had done but that didn’t happen. The coronavirus is contagious via human-to-human transmissions. Americans should have been better advised to wear face masks outdoors, to stay at home and to observe social distancing in public in order to ensure the virus would infect fewer people.

The common-sense measures could have saved countless American lives. Many US citizens had just ignored social distancing, rebelled against quarantines, while hospitals failed to stockpile on medical supplies. The faults therein lie with Americans, not the Chinese. But arrogance can blind people from recognizing the truth.

Narcissists believe they are superior to all others and when something goes wrong in their minds they conclude it must be somebody else who had stumbled. Apparently, Americans are failing to take responsibility for acting careless and insisting Beijing is to blame and hence many are demanding the Chinese government get sued on account of it.

Well as the saying goes, “pride cometh before the fall.” No matter how much Americans moan about the Chinese, their furious bellowing won’t cure what ails them. The Americans shrieking and wailing about China will do nothing more than delay and deter Beijing’s capability to help the US. China is already going back to business and opening up factories that can mass-produce much more COVID-19 supplies. The US is in desperate need of medical equipment.

But the US response to the coronavirus is spiralling out of control. In recent years, I’ve been asked to consult with key decision-makers on matters of geopolitics. I have learned a crisis can be like a stone rolling down a mountain. At first the stone rolls slowly so it’s easy to stop it, but delayed action means the rock rolls faster and faster, which won’t stop until crashing to the bottom.

Let’s all hope the US does not crash to the valley of despair. But if Americans keep blaming China not themselves, they might not escape a doomed fate.