Netanyahu leads in the Israeli election, but still lacks a majority 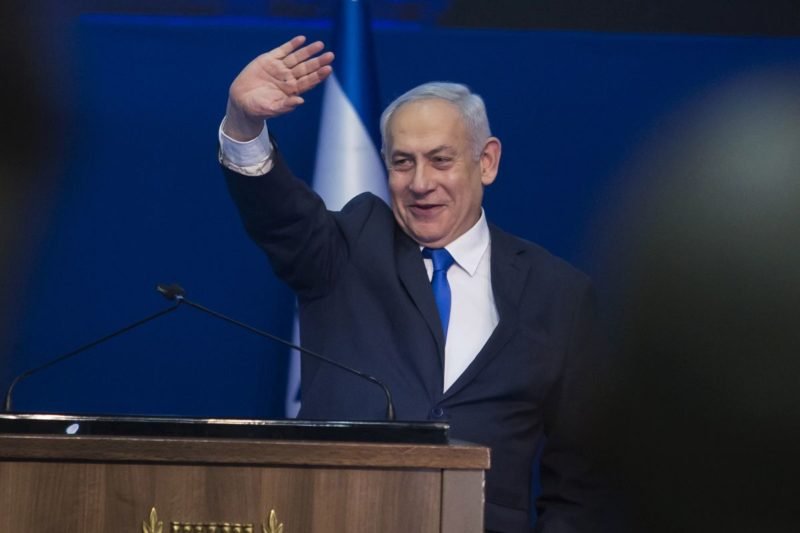 Prime Minister Benjamin Netanyahu led on Tuesday in Israel’s third national election in less than a year but was short of a governing majority, nearly complete results showed.

“We turned lemons into lemonade,” he told a cheering crowd at Likud’s election headquarters as exit polls were released.

But Gantz stopped short of conceding defeat, saying the election could result in another deadlock and he understood and shared his supporters’ “feeling of disappointment and pain”.

With some 90% of votes counted, Likud said Netanyahu met leaders of religious-rightist parties and secured their renewed pledge to join him in a coalition. That appeared to promise him 59 seats in parliament – two short of a ruling majority.

Netanyahu and his prospective partners “would not bar from the government parties that recognise the State of Israel as a Jewish and democratic state,” Likud said in a statement.

That beckoned Gantz’s centrist Blue and White and ex-defence minister Avigdor Lieberman’s secularist-nationalist Yisrael Beiteinu parties. But Gantz has ruled out sitting with Netanyahu, and Lieberman has long feuded with the premier’s ultra-Orthodox Jewish partners over their constituents’ state benefits.

A win for Netanyahu, 70, would be testament to the political durability of Israel’s longest-serving leader, who fought the latest campaign under the shadow of a looming corruption trial.

It would also pave the way for Netanyahu to make good on his pledge to annex Jewish settlements in the occupied West Bank, and the region’s Jordan Valley, under a peace plan presented by U.S. President Donald Trump.

Palestinians have rejected the proposal, saying it would kill their dream of establishing a viable state in the West Bank and Gaza Strip, territory Israel captured in the 1967 Middle East war.

Likud led Blue and White by 36 seats to 32, and Lieberman’s party, with seven, could tip the balance in complicated coalition building. A Likud spokesman said he expected Netanyahu to get lawmakers from the opposing camp to cross sides.

Lieberman said he would convene his party on Thursday afternoon to choose who to back.

“As we promised voters, we will do everything to prevent a fourth election and we intend to take decisive action, one way or another,” Lieberman told Israeli Channel 12 TV.

In addition to chafing at partnership with the ultra-Orthodox, Lieberman has pledged not to partner with any Blue and White-led coalition dependent on the support of Arab parties.

In the previous election, in September, Blue and White edged past Likud, taking 33 seats to its rival’s 32, but Gantz, like Netanyahu, was unable to put together a ruling coalition.

The mostly Arab Joint List party again emerged as the third-largest, growing to 15 seats from 13 in the last election.

Israel’s economy has weathered the political stalemate, with growth strong and the labour market tight. The main issue is that no budget has been approved since 2019 one was passed two years ago.

During an acrimonious race focused more on character than on policy, Netanyahu campaigned vigorously on his strongman “security-first” platform, familiar to voters over decades.

His loyal, blue-collar base has stood firmly behind him throughout, seemingly unfazed by his imminent trial.

During the campaign, Gantz ruled out teaming up with Likud in a “unity government” because of the criminal indictments against the prime minister, who has denied any wrongdoing.

Netanyahu has been charged with bribery, breach of trust and fraud over allegations he granted state favours worth millions of dollars to Israeli media barons in return for favourable press coverage, and that he wrongfully received gifts.

The first trial of a sitting prime minister in Israel is due to begin on March 17.