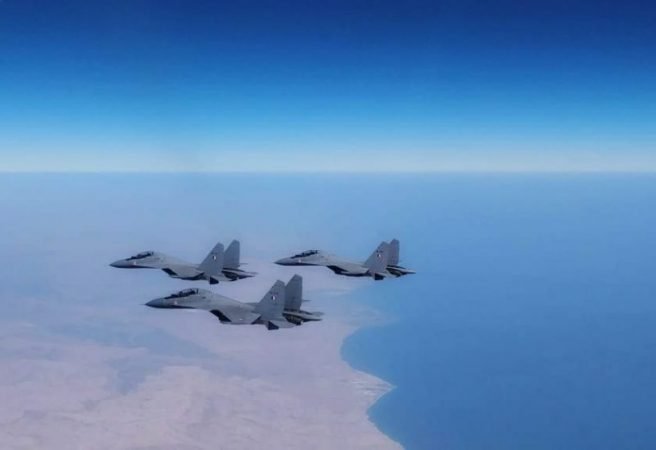 India marks another headway to enhance its growing ties with the Arab world, as for the first time the Indian Air Force (IAF) is participating in an annual multinational air exercise, Desert Flag VI hosted by the United Arab Emirates (UAE). Exercise Desert Flag VI, which began on 3 March 2021 will be a three-week-long multinational force employment warfare exercise, which aims to provide operational exposure to the participating forces while training them to undertake simulated air combat operations in a controlled environment. The exercise is being held at Al Dhafra Air Base, UAE.

The IAF is participating with six Su-30 MKI, two C-17 and one IL-78 tanker aircraft, the Indian Ministry of Defense quoted, further elaborating on their usage. The Sukhoi Su-30 MKI aircraft will undertake long-range ferry, routing directly from India to Al Dhafra with aerial refuelling support from IL-78 tanker aircraft. Whereas, the C-17 Globemaster III military airlift aircraft is a high-wing, four-engine, T-tailed military transport vehicle with a potential to carry payloads of up to 169,000lb, which will provide the support for induction and de-induction of the IAF contingent.

Apart from IAF, the multinational air exercise will involve air forces from United States (US), France, South Korea, Saudi Arabia, and Bahrain, along with Greece, Jordon, Kuwait and Egypt as observers. Regarding such diverse participation, the Indian Ministry of Defense claimed that as the large-scale exercise will involve diverse fighter aircraft from across the globe, it will provide the participating forces including IAF a unique opportunity to exchange knowledge, experience, enhance operational capabilities and interoperability. Thus, furnishing a path to strengthen international relations amongst the participatory countries, the ministry added.

It should be noted that India’s engagement in Desert Flag VI not only marks to be IAF’s debut-exercise in the Persian Gulf region but would also mark its fourth-time participation in a multinational exercise since the last five years, after Australia’s Pitch-Black wargames in 2018, Israeli’s Blue flag in 2019 and America’s Red Flag in 2016. Thus, signalling India’s growing inclination to boost its Defense capabilities and regional interoperability.

Historically India’s relations with Arab countries had been convoluted and sometimes antagonistic, they are evolving quite smoothly in recent times, especially under the diplomatic handling of the Modi government. Last year General M.M. Naravane visited Saudi Arabia and UAE, marking the first visit of the Indian army chief to the countries; Naravane’s visit set forth the agenda to stimulate defence coproduction as both the countries aspired to develop their indigenous capability. Another cooperative salience between India-UAE was when Emirati Airbus tanker provided mid-air refuelling support for three new Rafale jets flying from France to India. Lastly, PM Modi during his first term has visited Middle East countries 10 times, namely Iran, Israel, Jordon, Oman, Palestine, Qatar, Saudi Arabia, and Turkey once each, and UAE twice to elevate Indo-Middle East ties, in contrast to his predecessor Manmohan Singh who visited only 4 states during his 10 years of office. These evolving bilateral ties with the Middle East via strategic investment and partnership revels that India perceives countries in the Arab region as its priority due to changing geopolitical situation. This prioritizing approach towards the Middle East is crucial for India as doing so will guard its security, and interest, helping it to counter its emerging challenges.

Firstly, via bilateralism India is safeguarding its energy supplies and trade routes to and from the Middle East, thus boosting its economic growth as Pakistan has blocked India’s direct overland trade route to the region. Second, to counter China’s growing influence in the region particularly through Beijing’s BRI projects which encompasses major parts of the Middle East. Thirdly, any instability or conflict in the Middle East can endanger India’s large diaspora community. Thus, India must build strong security partnerships with Middle East countries. Hence, it can be said that in addition to these growing bilateral ties, the recent Desert Flag VI highlights a step forward in India’s diplomatic dealing as this three-week-long air exercise can mark the emergence of multinational cooperation between India and Middle East powers both at political and defence front, thus, increasing the regional interoperability.