Why So Few Protests Against Putin’s Constitutional Shake-Up? 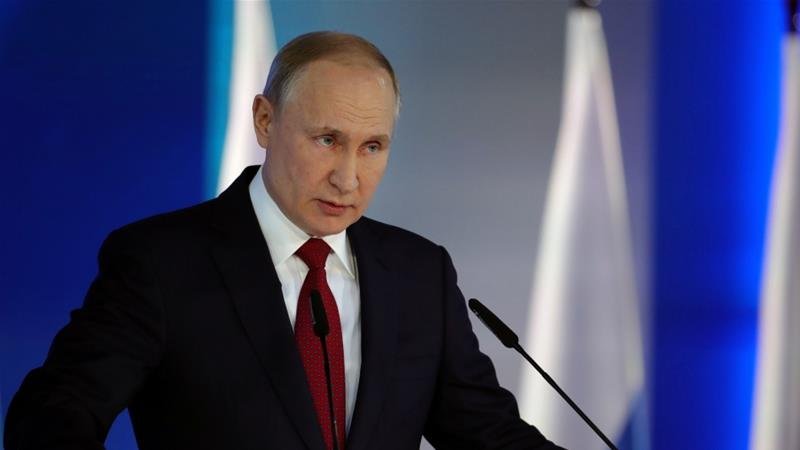 When Russian President Vladimir Putin announced a raft of constitutional changes in his state-of-the-nation speech on January 15, immediately fueling mounting suspicion that he was seeking a way to retain power after his current term ends in 2024, it didn’t take long for the country’s dissenting voices to make themselves heard.

Within two days, the Moscow mayor’s office had given permission for a 10,000-strong protest against the proposed amendments on February 1, providing a rare public platform in a country where mass rallies must be approved in advance. Activists prepared to vent their anger over what many saw as a brazen attempt by Putin — the longest-serving Kremlin leader since Soviet dictator Josef Stalin — to indefinitely prolong his rule.

But signs quickly emerged that the opposition was far from united around a campaign to scupper his plans — a goal that might be almost impossible to attain even with a concerted effort, given the Kremlin’s control over politics and the media. No party or activist took credit for submitting the protest application, and some began suggesting that the whole idea of rallying against Putin’s plans was misguided.

In an impassioned two-part Twitter post, Aleksei Navalny — Russia’s most prominent opposition leader and the organizer of numerous nationwide protests in the past decade — spoke out against street action opposing the constitutional changes. “As regards various proposed rallies ‘in defence of the constitution’: Russia’s constitution is loathsome,” he wrote. “It should not be defended.”

Accusing the Russian authorities of using the constitution to “take everything away from us, from elections to pensions,” Navalny wrote that it was necessary to “struggle, protest, disseminate information” against Putin and his associates, but that the idea of protecting “the good constitution from the bad Putin” was misguided.

Navalny and his supporters in Moscow had been instrumental in promoting and coordinating a wave of protests that swept the capital last summer in a failed bid to force the authorities to allow independent candidates to run in elections to the city council. This time, they were taking a step back.

“The constitution currently prevents Putin from ruling without end, and that’s why they want to change it,” Stanislav Volkov wrote on Twitter. “And in the face of that do we citizens not need to defend our rights on the street just because the protest carries the wrong slogan? Have I misunderstood something?”

The lack of any concerted public campaign against the constitutional changes may shed light on long-standing divisions in the ranks of Russia’s opposition, analysts say, but it also suggests that many are loath to encourage dangerous street protests in the face of a potential clampdown by police and a very public defeat should turnout prove low.

“This should not be a clash between Putin the reformer and an opposition that wants to retain the status quo,” Abbas Gallyamov, a former Kremlin speechwriter turned political analyst, told media. “That’s a clash the opposition will lose.”

Polls in recent months have shown that a majority of Russians desire significant political changes amid fatigue with foreign escapades like Russia’s military campaign in Syria and its involvement in the ongoing conflict in eastern Ukraine. Putin’s amendments call for increased social spending and an annual adjustment of pensions to inflation, tapping widespread demands for improved living standards that have also been borne out in surveys.

“Navalny is right, politically speaking,” Yekaterina Schulmann, a Moscow-based political scientist, said in a telephone interview. “It’s counterproductive right now to protest against change. People are more and more in favour of the change, and one can view this initiative as a way of giving people at least the appearance of it. This turns the tables on opposition forces.”

Since Putin’s speech, officials and lawmakers have acted fast to enact his proposals, giving them preliminary approval in parliament and signalling that a nationwide vote will be held within a few months — without specifying its format. A separate shake-up announced hours after Putin’s address — a cabinet reshuffle that saw a number of longtime ministers replaced with new officials previously unknown to much of the population — may also have been designed at least in part to satisfy citizens’ craving for change.

Navalny’s stance notwithstanding, there have been some small-scale protests against the changes. On January 18, people held one-person pickets outside the presidential administration building. On January 25, some 100 mostly left-wing activists gathered in the same spot to deliver a petition demanding a referendum over the proposed changes. In the meantime, a manifesto decrying the “constitutional coup” has gathered over 22,000 signatures.

But scenes from last summer, when thousands of Muscovites marched peacefully through the city’s central streets and were met with police batons and mass detentions, seem unlikely to recur in coming weeks.

“If the opposition fails to correctly formulate the protest message, there won’t be any major protests,” Gallyamov said. “There’s a strong demand for reform in society and people won’t reject reform just for the sake of it — even if they don’t fully understand its nature.”

Aleksandr Pozhalov, director of research at the Moscow-based Institute of Socioeconomic and Political Research, agrees the liberal opposition has been placed in a bind. Those who criticize the government for eroding democratic institutions and allowing shadow politics to flourish concede that some of the changes proposed by Putin appear, at least on the surface, to strengthen institutions such as the parliament and the Constitutional Court.

Others fear that Putin’s populist pledges to enshrine a minimum wage and other benefits in the constitution will resonate among voters and might take the wind out of the sails of any protest movement. Since the changes deal with the minutiae of Russia’s political system, even such a figure as Navalny, whose YouTube channel attracts millions of viewers each week, might be hard-pressed to convince Russians that the constitution is worth risking arrest for — if that is, he himself believed it.

“The opposition’s specific complaints about the changes are aimed at the extremely narrow circle of people who understand what’s going on, but aren’t able to impassion large sections of the population,” Pozhalov told media – Radio Free Europe/RL.

In the absence of a major protest movement against the constitutional changes, some opposition activists have turned to other ways of encouraging street turnout. On January 19, more than 1,000 people marched through Moscow in an antifascist rally that Kremlin critic Yulia Galyamina sought to channel against the constitutional shake-up. She was met with limited enthusiasm.

“In order for these protest initiatives to gain a measure of public attention, they need to be presented as protests not against change, but against the idea ‘Putin forever,'” Schulmann said. “That’s where the public support lies.”

Apparently tapping into that mood, Navalny ally Ilya Yashin tweeted on January 20 that the “response to Putin’s plan to seize power” should be a big turnout for a march slated for February 29 to mark the fifth anniversary of opposition leader Boris Nemtsov’s killing in 2015. For that to be effective, he wrote, “There must be a sea of people” at the event.

It wasn’t until January 21, four days after the authorities granted permission for the February 1 rally in Moscow, that the newspaper Novaya Gazeta revealed that the applicants had come from Russia’s Libertarian Party. One of them, Igor Yefremov, told Russian media that the party had decided to “take time to think and not announce the event immediately because we weren’t sure whether it should take place. In the end we decided that it’s better to cancel it.”

Navalny, in a blog post responding to criticism of his inaction over the political shake-up, argued that Russia’s 1993 constitution was customized for the benefit of then-President Boris Yeltsin, and drafted in a way that allows Russia’s leaders to violate its basic tenets. Rather than protesting changes to the document, people should protest Putin’s continued hold on power. He ended by calling for patience and emphasizing the long game.

“Refusal to submit to the repressive machine, and daily work at exposing lies and eroding the faith of those cheated by the usurper — that’s the answer to the question ‘what to do,'” he wrote. “Life will determine our tactics in the coming weeks. The main thing is not to forget what we’re fighting for.”

The stance may be pragmatic, considering the public mood and the relative lack of protest potential. But the lull may be temporary. The nationwide vote, expected in April, will give the opposition another opportunity to rally around a cause, and a chance to protest official policy at the ballot box.

“It’s this national vote, whatever form it takes, that will be a dangerous moment for the political management,” Schulmann said. “So even if the protests don’t come now, they may well come later.”