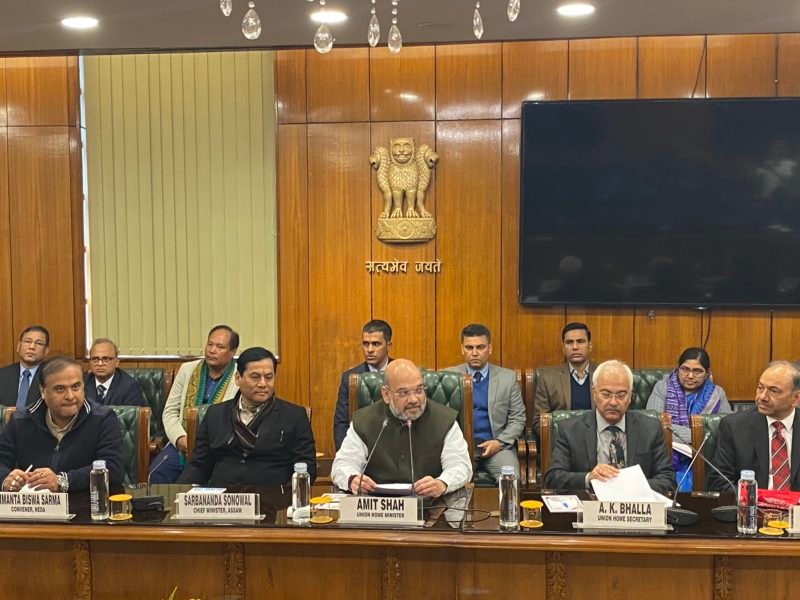 The Indian government signed a peace accord with National Democratic Front of Bodoland (NDFB), one of the most fearful insurgent groups of Assam. It also includes the All Bodo Students’ Union (ABSU) as one of its signatories.

The agreement was signed by Chief Minister of Assam, Sarbananda Sonowal, in the presence of the highest leadership of the ABSU, NDFB and Minister of Home Affairs, Amit Shah.

Assam minister Himanta Biswa Sarma in a tweet said the Bodo Peace Accord can result in a “full and final” answer to the decades-old Bodo question. “The BodoAccord shall reaffirm the territorial integrity of Assam and at the same time usher us into a new hope of peace and progress in Bodoland,” he said.

Sarma gave the credit for this accord to the leadership of PM Modi & Amit Shah.

Meanwhile, a 12-hour Assam bandh (Shutdown) called by non-Bodo organisations in a protest against the Centre’s move to sign a peace accord with different Bodo stakeholders.

According to PTI sources, ordinary life has been affected in Kokrajhar, Baksa, Chirang and Udalguri districts of Assam, however, the shutdown failed to have any impact in other areas of the state.

The Bodos are an ethnic community comprising 18 sub-groups. According to E. A. Gait, Bodos are “the aborigines or the earliest known inhabitants of the Brahmaputra Valley”. The 2001 Census report indicates that Bodos are the largest tribal groups in entire North East and eight largest tribes in India. According to the Census of India 2001, has been recorded as 33, 08, 570 accounting for 12.41 per cent of Assam state population.

But, due to dissatisfaction towards the mainstream Assamese politician as well as society, the demand for a separate political identity and self-determination raised. The perceived discrepancy between men’s value expectations and their value capabilities led towards the discontent among the Bodo leaders and looked forward to better political alternatives.

Ethnic identities have been the key reasons for unrest in the Northeast. The demand for the creation of a homeland for the plains tribal communities in the shape of Udyachal was a major plank of the Bodo political movement in the 1960s.

Bodo demands soon came to be backed by Bodo armed groups, leading to the emergence of an insurgency situation in the region. This was later rechristened as the National Democratic Front of Bodoland (NDFB). Violence and intimidation by this group escalated with a cycle of extortion, kidnapping and killings. The Bhutanese forest afforded these insurgents a safe haven across the border.

Operation All Out has been a grand success. Additional Army personnel and Paramilitary Forces were inducted during the operation. Helicopters and other force multipliers were also used for surveillance and carriage of troops. The objective was to carry out relentless and well-directed military operations to decimate the NDFB(S), instil confidence among the local populace and bring normalcy in the region.

Its success can be gauged by the fact that as of January 1, 2016, 48 militants have been neutralised, 766 apprehended and more than 443 weapons of various kinds recovered. Since December 23, 2014, the area has been peaceful. No large scale act of violence has taken place. Extortion and illegal taxation activities have come down and recruitment into militant groups has considerably reduced.

This is the third Bodo accord to be signed in the last 27 years when the violent movement for a separate Bodoland state claimed hundreds of lives, destruction of public and private properties.

The first Bodo accord was signed with the All Bodo Students Union (ABSU) in 1993, leading to the creation of a Bodoland Autonomous Council with limited political powers.

In 2003, the second Bodo accord was signed with the militant group Bodo Liberation Tigers (BLT), leading to the formation of a Bodoland Territorial Council (BTC) with four districts of Assam — Kokrajhar, Chirang, Baska and Udalguri — called the Bodoland Territorial Area District (BTAD).

The BTC has control over 30 subjects like education, forests, horticulture but no jurisdiction on the police, revenue and general administration departments, which are controlled by the Assam government. The BTC was formed under the 6th Schedule of the Constitution.