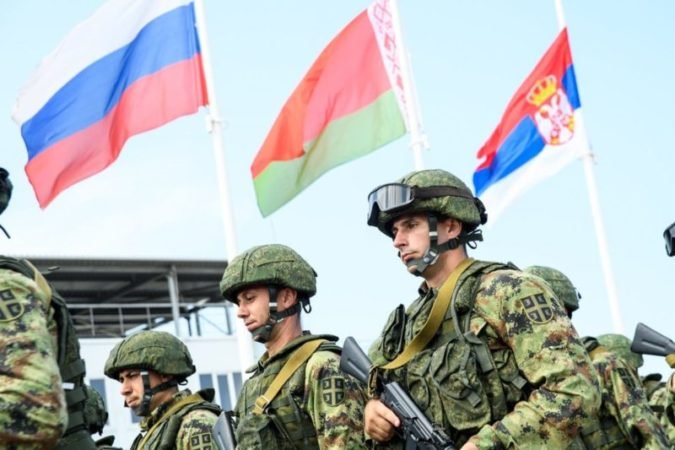 After many years of not investing in the armed forces, Serbia began to invest more seriously in rebuilding its army. Serbia has spent close to €830 million since December 2016 to acquire new war techniques and modernize its armed forces, including overhaul and maintenance of weapons and military equipment. This can be calculated from the final accounts of the budget for the period 2016 – 2018 and from the budget for this year. In the budget for the current year alone, according to the classification 512, a record €182.6 million was approved for the military defence.

The Government decision of 7 October increased the budget for arms procurement to around €233.48 million from the budget surplus. When all expenditures are calculated, it is estimated that €356.25 million will be spent this year. And in 2020, according to the budget proposal, it is foreseen to spend significantly less money compared to this year, around €218.32 million. From all of the above, it is clear that the total funds for modernization will exceed one billion euros, which clearly indicates that the Serbian army is seriously modernizing.

Serbia’s position in the region is such that only a strong Serbian army can guarantee peace. A strong role in the modernization of the armed forces of Serbia plays Russia, which in addition to selling arms without conditions, also perform training for members of the Serbian Army. It is especially important to emphasize that Russian military technology is significantly cheaper than the Western one, and in many segments has much better quality.

Six MiG-29 jet fighter aircrafts donated by Russia to Serbia were put into operational use, and some of the main costs of activating them so far have included transportation, overhaul of one aircraft, minor overhaul of the remaining five aircrafts, life extension, bringing Russian jets to the level of existing ones (approximate level of MiG-29SD), procurement of spare parts, ground and other equipment.

Immediately after it was announced that Russia will donate six MiG- 29 fighter jets to Serbia, officials said that the entire arrangement would cost 185 million euros and that price would also apply to 4 Serbian MiG 29 fighter jets, a total of 10 jets. This should be spent in three phases, two of which have already been implemented, the third phase is already initiated and should be completed by the end of 2020. Also, in addition to the modernization package, it is inevitable to acquire a certain amount of aircraft weapons, which can be a major expense. Because the price of one R-77 air-to-air missile is around $1 million. When it comes to the four MiG-29 fighter jets donated by Belarus, they will be delivered in early 2021 and they will most likely arrive modernized. As the deadline for completion of the works is almost two years, it can be assumed that, apart from the general overhaul, it will also be a modernization, or will actually be something if not the same as phase three for the 10 existing Serbian Mig-29 fighter jets. Some real cost of these works in Belarus could be up to 10 million euros per plane.

In October, three additional medium transport multipurpose Mi-17V-5 helicopters arrived from Russia to Serbia, slightly better equipped than the first two purchased in 2016. The price of the Mi-17V-5 ranges from $14 million to $22 million, depending on the version and the entire package it contains for training, equipment, armament and logistics. Serbia has also acquired 4 Russian landing – Mi-35M assault helicopters, which can be expected to be delivered later this year or early next year. The price of this type of helicopter in the market ranges from $20 million to $30 million and in certain arrangements may exceed $30 million.

In addition to 6 fighter jets MiG-29, Russia also donated to Serbia 30 T-72 tanks and 30 BRDM-2 armoured reconnaissance vehicles. It is still not clear which version of the T-72 tanks Serbia will get. Although it was said to be a donation, the modernization of the armour, as well as everything else that goes with them, will be paid by Serbia. As for the BRDM-2, 10 armoured personnel carriers have arrived in Serbia so far, and the rest is expected to come in the near future. The purchase of medium-range surface to air missile systems Panstir–S1 has been officially confirmed. This system is not cheap at all, for only one vehicle it is necessary to allocate about $15 million, but then there are the costs of training, logistics, spare parts, additional combat missile kits, so the price can be over $20 million.

All of these weapons, which come from Russia and Belarus, and which have been confirmed to have been purchased from the highest level and even by the Serbian president himself, could end up costing around $600 million.

However, the Serbian purchase of weapons from Russia did not go unnoticed by the United States of America. United States special representative for the Western Balkans Matthew Palmer in an interview with Macedonian media expressed concern that Serbia could acquire Russian weapons:

“I feel concerned not only about the deployment of Russian weapons but also about the possibility of Serbia acquiring important Russian military systems,” the US diplomat told Macedonian media. And if the President of Serbia Aleksandar Vucic has repeatedly said that Serbia has no money for the S-400 and that Serbia wisely chooses which weapons to buy, Matthew Palmer “advised” Belgrade to be careful with such acquisitions. He made it clear that “the US could revise the sanctions regime against Serbia.”

The military exercises of the Serbian and Russian armies have been taking place in the territory of Russia and Serbia for the last five years. A recent exercise that has attracted much attention due to the arrival of the modern long-range surface to air missile system S-400 and medium-range surface to air missile systems Panstir–S1, represented the second phase of the “Slavic Shield 2019” and the first phase was conducted in September near Astrakhan in Russia. Then the Serbian army underwent training on the S-400 Triumph system, which is the most powerful long-range air defence system in the world. It is also important to note that long-range surface to air missile system S-500 has already been developed in Russia and is expected to enter the operational use of the Russian military next year.

Without a doubt, Serbia needs the S-400 Triumph system. Belgrade needs an S-400 system that would deter the possibility of aggression against Serbia. In today’s world, nothing can so good guarantee the security of the state as strong air defence. Experiences from aggression against Serbia, Afghanistan, Iraq, Libya and Syria teach us that only countries with strong air defence systems are states that can run an independent or neutral policy. But it is a misconception that one S-400 battery, as it is presented by the significant part of the Serbian analysts, is sufficient to protect the sky of Serbia. Serbia needs two S-400 missile batteries which would cost around one billion euros. Also, S-400 has never been designed to operate as stand-alone system and is most effective as part of a much wider integrated air defence systems.

However, bearing in mind that the Government of Serbia and international financial institutions predict that Serbia will have a GDP growth of about 4% in the years ahead, then there is a real possibility that Serbia will complete its air defence systems by purchasing Russian short, medium and long-range surface to air missile systems. This conclusion is also imposed in the fact that the Serbian army has been trained to manage the S-400 system. It is important to note that members of the Serbian Army are regular participants of the “International Military Games” and members of the Serbian Army even won bronze in the “Military Rally” competition in August and also it’s important to point out that Serbian military personnel study at Russian military universities. All of the above clearly indicates that there is strong cooperation between the Russian and Serbian military, which will only be stronger in the years ahead.