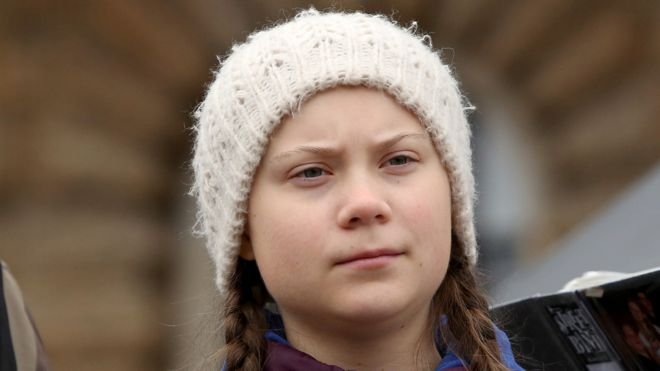 Greta Thunberg soared from an apparently lonely girl protesting climate change with a hand-written cardboard placard outside the parliament building in Stockholm to one of the best-recognized faces in the world, at least for a brief while.

The Western media conglomerate would like its consumers to believe that the phenomenon has occurred spontaneously and on its own merits. Greta is in the news, they imply, because she is intrinsically newsworthy.

As it happens Greta’s “spontaneous” rise was neither true in fact nor possible in principle. Greta was not “in the news,” she became news because there is an agenda behind her launch. This is confirmed by ample empirical evidence. It could not be otherwise. The media do not “reflect” reality, and they are not designed to do so. They process reality and seek to shape reality in line with the ideological assumptions and political ambitions of their owners and controllers.

There is no “journalistic freedom” in the news media space, on either side of the Atlantic, any more than there is “academic freedom” in the departments of sociology, history, or anthropology in today’s Anglosphere. Both the media and the PC-infested academe exist for a clear purpose. They are in the twofold business of:

• Setting the agenda by imposing and vigilantly maintaining a strict hierarchy of mandatory, desirable, or merely approved topics for debate; and

• Manipulating their consumers (readers, watchers, students) into seeing those topics as important per se, and accepting their treatment within the prescribed terms of reference.

In the unreported reality, there is a major, well-financed PR machine behind Greta. It is controlled by powerful international actors and lavishly financed from discrete sources. This machine has enabled her to appear on the covers of magazines, to yield over three million results on Google, to meet Pope Francis and various world leaders, to address the UN, etc.

At the very least it would seem intuitively legitimate to ask how exactly did this phenomenon happen. But no major news outlet, TV channel, or newspaper has allowed—let alone encouraged—its reporters to go in search of the “untold story of Greta Thunberg.”

Most major media outlets are owned by a half-dozen companies. This enables the elite class to impose a specific message on the consumers rapidly and massively. Greta’s meteoric rise is the fruit of such media saturation. She embodies the ability of the media to manufacture issues ex nihilo. Mass media programming is particularly effective when directed at those who have not developed an ability to think critically, i.e. adolescents. Greta was developed and fine-tuned to target this exact audience.

The green movement has accordingly degenerated into a millenarian cult. It has its apocalyptic creed, its sacred rituals, its heretics, and now its priests. It is rooted in the politics of irrational fear. “Repent, you sinners, for the end of the world is nigh!” says Greta, and she could have come straight from Salem 300 years ago. The bizarre spectacle is aided and abetted by the media machine. A rational analysis of her claims is extremely rare and detested.

Greta is the High Priestess: the monotone voice, her eyes filled with apocalyptic dread, plus warnings of the coming great ‘fire’ that will punish us all for our sins, the sense of absolute certainty. The Western media machine has made this spectacle possible. Greta is saying what she has been trained to say, and what the powerful recipients of her message want her to say. Greta is a project. She has been manipulated into manipulating others.

How it all started… With a simple tweet! “One 15-year-old girl in front of the Swedish parliament is striking from School until Election Day in 3 weeks[.] Imagine how lonely she must feel in this picture. People were just walking by. Continuing with the business as a usual thing. But the truth is. We can’t and she knows it!”

In the media-ignored real world, the very foundations which have financed the climate “movement” over the past decade are the same foundations now partnered with the Climate Finance Partnership looking to unlock 100 trillion dollars from pension funds.  Check out “The Manufacturing of Greta Thunberg for Consent” for the identities of individuals and groups at the helm of this interlocking matrix, controlling both the medium and the message.

“Greta became a climate champion and tried to influence those closest to her. Her father now writes articles and gives lectures on the climate crisis, whereas her mother, a famous Swedish opera singer, has stopped flying. All thanks to Greta. And clearly, she has stepped up her game, influencing the national conversation on the climate crisis—two weeks before the election.”

We Don’t Have Time reported on Greta’s strike on its first day and in less than 24 hours its Facebook posts and tweets received over 20,000 likes, shares and comments. It didn’t take long for national media to catch on: “As of the first week of the strike, at least six major daily newspapers, as well as Swedish and Danish national TV, have interviewed Greta. Two Swedish party leaders have stopped by to talk to her.”

The article continues: “Is there something big going on here? This one kid immediately got twenty supporters who now sit next to her. This one kid-created numerous news stories in national newspapers and on TV. This one kid has received thousands of messages of love and support on social media.”

What was going on was the launch of a global campaign to usher in a required consensus for the Green New Deal and other climate-related policies and legislation written by the power elite. This is necessary in order to unlock the trillions of dollars in funding—ostensibly due to massive public demand. Agreements and policies which include carbon capture and storage (CCS), enhanced oil recovery (EOR), bio-energy with carbon capture and storage (BECCS), rapid total decarbonisation, payments for ecosystem services (“natural capital”), etc., need money. Their development and maintenance require a mechanism to unlock $100 trillion for new investments and infrastructure. The project is audacious, but it is deemed doable by its creators.

The manipulative masterminds behind the Greta Project are her own parents. Her father is actor Svante Thunberg, and his father is actor and director Olof Thunberg. Her mother is the famous opera singer Malena Ernman who became a celebrity at the Eurovision Song Contest in 2009. In 2017, Ernman won the WWF “Environmental Hero” award for her “involvement in the climate issue”. Just a year later, on August 20th, 2018, her 15-year-old daughter started protesting in front of the Swedish parliament. Four days later, Ernman published a book Scenes From the Heart, which claims (inter alia) that Greta can actually see carbon dioxide emanating from vehicles and buildings.

A young woman is often seen “advising” Greta.  Meet Luisa-Marie Neubauer, a member of ONE Campaign, managed by Bill Gates and Bono and funded by George Soros’ Open Society Foundation. The corporate media machine overtly denies any such connection. To wit, the Associated Press (on its “fact-checking” site!) has an item with the weird title Climate activist Greta Thunberg does not have ‘handler’. The AP felt compelled to deny any such possibility upfront. It admits that Neubauer is linked to the Soros-funded group, but asserts that she does not serve as Greta’s “handler.” Well, that settles the matter.

The media class is imposing frames which make every discourse possible only within its peculiar terms of reference. The result is a global problem that is a synthesis of all others. The globalist utopia advocated by Al Gore, Soros, Greta’s handlers, et al., is symptomatic of the looming end of Western culture as such. The elite’s environment, the real world outside the Empire’s control centres, is rapidly becoming symbolic rather than substantial.

However, on the plus side, the power of the corporate media is on the wane among the grown-ups. Its overtly partisan character in the U.S. is manifested in the collective Trump Derangement Syndrome. The collapse of all standards is grotesquely manifested in the media coverage of the Epstein affair. In the media world, the “natural” is squeezed out of the milieu, with nature merely providing the building blocks for the virtual.

The Western elite class, spearheaded by the media machine, seeks a new form of the ‘end of history’ in the transformation of society into a socio-technological system regulated by the enlightened state apparatus composed of themselves. Artificially induced climate panic, based on dubious science, is a major step in this endeavour. It would reflect the culture of man who has lost his bond with nature, immersed in artificial reality and permeated with it from within.

There is a malaise at the very core of Western media machine, and Greta is one of a thousand possible case studies. The corporate media elite shares with its masters the rejection of polities based on national and cultural commonalities. It detests durable national elites, constitutions and institutions. It is hostile to independent national economies. It exalts transnational institutions and mechanisms of control, such as the EU machine. It rejects Western political tradition based on limited government at home and nonintervention in foreign affairs. Above all, it advocates a form of state capitalism managed by the transnational elite apparatus of global financial and regulatory institutions.

The elite class’s core belief—that society should be managed by the transnational state in both it’s political and its economic life—is equally at odds with the tenets of the old liberal left and those of the traditional right. After the demise of totalitarian XX century projects, neoliberalism has become the agent of what Oswald Spengler presciently described, over a century ago, as the Decline of the West.

The Western media machine is an accessory to the project, its instigator and propagator. The media controllers’ key dictum—that humans can and should be transformed by the process of systematic indoctrination—was not defeated in the Berlin bunker or on the Berlin Wall. It must be debunked, discredited and destroyed, for the sake of truth, and decency, and—ultimately—for the sake of humankind’s very survival.

Srdja Trifkovic, Ph.D., is foreign affairs editor for Chronicles: A Magazine of American Culture. He is a professor of international relations at the University of Banja Luka in Bosnia-Herzegovina and the author of several books. Earlier version of this text appeared in the Chronicles, under the title: “Greta the Swede, or Gretinizing the Global Media”