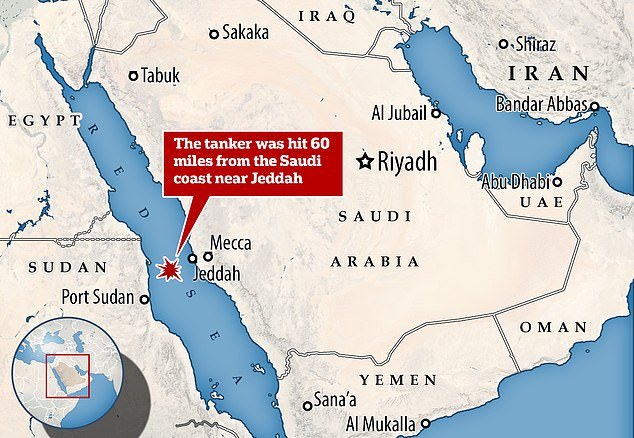 The Sabiti, which was set ablaze, suffered heavy damage and had leaked oil after it was struck in the morning about 60 miles (96 km) from the Saudi port of Jeddah, Iranian media reported. State-run IRNA agency said the leak had been brought under control.

The alleged attack is the latest incident involving oil tankers in the Red Sea and Gulf region and is likely to ratchet up tensions between regional foes Iran and Saudi Arabia.

The Red Sea is a major global shipping route for oil and other trade, linking the Indian Ocean with the Mediterranean via the Suez Canal. Crude prices jumped on the news and industry sources said it could drive up already high shipping costs.

The U.S. Navy’s Fifth Fleet, which operates in the region, said it was aware of media reports about the tanker, but did not have any further information.

NIOC named the ship as the Sabiti, a Suezmax vessel after initial reports said it was the Sinopa. Refinitiv ship tracking data showed the Sabiti in the Red Sea and heading south under its own power, bound for Larak, off Iran’s southern Gulf coast.

Tensions with the United States have been running high since Washington withdrew from a deal between world powers and Iran that aimed to rein in Tehran’s nuclear ambitions. U.S. sanctions have slashed Iranian oil exports, on which Tehran relies.

China, the top buyer of Iranian oil, said it hoped all parties would work to uphold peace and stability in the region.