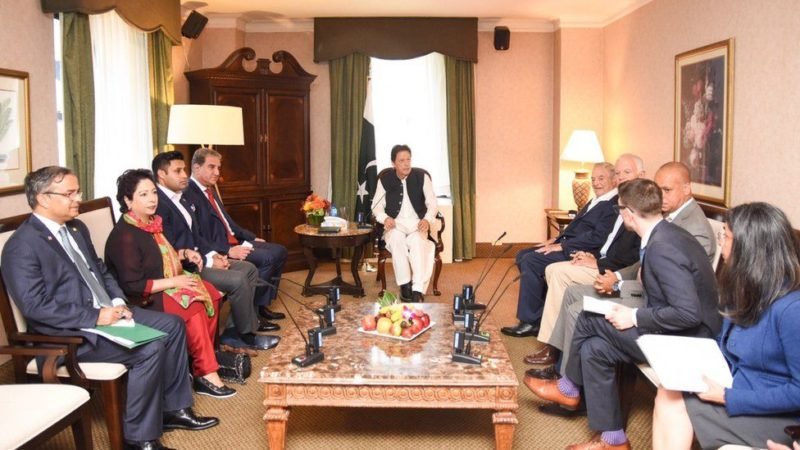 The meeting between Jewish billionaire George Soros and Pakistani PM Imran Khan has backfired for Prime Minister Khan, as the country’s Islamists saw it as a “proof” of his ties with Jews and vowed to oust the government.

The “war” on PM Khan has been announced by the leader of the Islamist political party Jamiat Ulema-e-Islam Fazl (JUI-F), Fazlur Rehman, who also leads an alliance of five right-wing and hardline-Islamist parties, known as Muttahida Majlis-e-Amal (MMA).

Rehman announced a major protest, dubbed ‘Freedom March,’ that will be held on October 27, warning the authorities against any attempts to disrupt it and assuring his supporters that the “war” will go on until the government falls. MMA, as well as other opposition parties, have been repeatedly accusing Khan of rigging last year’s general elections and urging him to step down.

“The current government is the result of a fake election and fake results,” Rehman said during a press conference on Saturday.

While the alleged electoral fraud has been on the table for the opposition for quite some time, the last straw was a meeting between Khan and the founder Open Society Foundation, billionaire George Soros on the sidelines of the UNGA late in September.

The meeting prompted a very angry reaction among Pakistani Islamists. Rehman accused Khan of being a “Jewish agent” striving to turn the country into a puppet of foreign players.

“By meeting that infamous Jew, [Khan] has made it clear that [his government] doesn’t want to bring reforms in religious education. They want to make Pakistan’s educational system subservient to the West,” Rehman stated.

The Soros-Khan talks have sure come in handy for Rehman, as he has repeatedly accused Khan of having close ties to Jews – as well as the US – and declared in 2013 that voting for him was ultimate “haram” (forbidden) for true Muslims. When asked for proof back then, however, Rehman said his word was enough, since such a righteous man as he is would never speak ill of anybody.

Such rhetoric has fallen flat, as Khan secured a solid win during August 2018 elections. His party holds 156 seats in parliament, while five MMA parties combined have only 16 seats, and centre-right conservative party the Pakistan Muslim League (Nawaz) has 84 seats.

So far, the exact details of the upcoming ‘Freedom March’ protest have not been announced, yet media reports suggest it will be an all-men event, with the women being banned from attending it all together.

Who’s George Soros – The Man who broke the Bank of England?

George Soros has been head of Open Society, a charity organisation in 120 countries which is being accused of being part of a larger global conspiracy, from Erdogan’s Turkey to Orban’s Hungary to American white supremacist shooters.

Why have the newspapers called him “the man who broke the Bank of England”? During the 1992 Black Wednesday currency crisis, when the UK withdrew from the European Exchange Rate Mechanism, his short sale of US$10 billion worth of sterling made him a cool profit of $1billion. Black Wednesday is estimated to have cost the UK government £3.4billion.