As the Sino-Bangladesh ties deepen, is India out of the game? 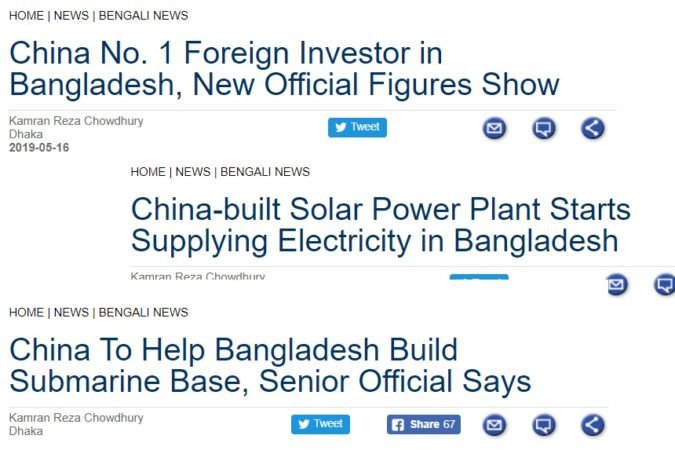 BenarNews (12/09/2019): “China To Help Bangladesh Build Submarine Base, Senior Official Says…Beijing will help Bangladesh construct its first submarine base …The two submarines that Dhaka purchased for the U.S. $205 million are berthed at a Bangladeshi naval base in Chittagong, navy officials said.” [3]

The aforementioned events are simply a few of various instances corroborating the fact that the bilateral ties between China and Bangladesh have been escalating gradually. They have become the epitome of new-age partners. However, this has not always been the case. From former adversaries to being strategic partners, they surely have come a long way. If we look back to 1971, China supported its all-weather ally Pakistan during the liberation of Bangladesh.

It also vetoed the latter’s entry as a member state to the United Nations. However, today they seem to have put everything behind the past, with their relationship only evolving over the years.

India has always played a major role in the politics of South Asia. However, in the last few years, China has taken over the position and managed to maintain a strong stance for itself. This has resulted in a shift in power dynamics in the region. China has emerged to become the biggest arms supplier to Bangladesh. It also has a massive bilateral trade with the country, amounting to approximately $12 billion. Just when it seemed like it couldn’t get better than this, Behold! China signed the Asia Pacific Trade Agreement (APTA), which removes tariff barriers from commodities imported from Bangladesh. Now that is a deal which cannot be said no to.

Moreover, China is the only country with which Bangladesh has signed a defence agreement. Signing the much controversial 21st Century Maritime Silk Road and the Silk Road Economic Belt initiatives, Bangladesh has in-turn acted on its part to maintain cordial ties with China. Bangladesh is important as it is one of the important pivots of maritime and overland connectivity between the Indian Ocean and China’s landlocked provinces.

By the looks of it, China is taking every step possible to woo Bangladesh. Be it by bolstering bilateral trade, funding Dhaka’s developmental projects or being partners in road connectivity collaborations, China has managed to maintain a solid presence in one of the fastest developing economies in Asia. However, it cannot be disregarded that these activities are exercised according to Beijing’s terms and conditions which implicitly works in its favour. It is gaining tremendously from the bilateral trade amounting to almost $9 billion trade gap. Bangladesh intends to become a developed nation by 2040 and to achieve that it needs to develop its infrastructure and boost its economic efficiency. This has given China yet another advantage over Bangladesh, considering Beijing’s age-old tactic of “assisting” developing countries.

Following this, China has become a major development partner of Bangladesh, becoming the no. 1 foreign investor in the country. One thing is for sure. Beijing sure knows when and how to hit the soft spot!

There are many reasons why China is going out of the way to help Bangladesh. First thing first, its presence in one of the most significant countries in the South Asia region has proven to be a threat to India, much to its wishes. Bangladesh’s close proximity with the Siliguri corridor, which is an area of contention between India and China would help the latter to keep an eye on India’s activities in the region.

The ports in Bangladesh are another important asset for China, which could be used for supply of its energy. This reduces its dependence on the disputed Straits of Malacca and helps in easy transportation of its supplies. Bangladesh’s cheap labour could prove to be advantageous for China.

Sino-Bangladesh relation could seem like that one of interdependence. However, this has only increased Dhaka’s dependence on Beijing. Also, this relation is strongly based on deep-rooted interests of China. Its debt-trap policy has worked out well in its favour in many countries like Pakistan and Sri Lanka. Bangladesh should be wary about the same and be vigilant in every activity involving China.

How is India Loosing?

There was a time when India had a favourable position over political, military and economic aspects of South Asia, with the United States being secondary to it.

India was rightly called the “Big Brother” of the region. With China’s entrance, it is slowly losing the grip and position it held once, with America’s presence slowly fading too. Trump’s extreme foreign policies and backing off from significant deals like the Trans-Pacific Partnership, the Iran Nuclear Deal and the Paris Agreement has only led to scepticism regarding its loyalty and commitment towards other countries. This has thus, resulted in many Asian countries like the Philippines and Indonesia to change its strategies and slowly tilt towards the Dragon. None can blame them though!

The question here is how is it faring so well for China? Where is India going wrong? “The Chinese are using their abundance of labour, capital and workforce to project their influence,” said Mira Rapp-Hooper, a scholar of Asian security issues at Yale Law School. She added, “It’s mostly taking place in countries where the U.S. does not have a lot of influence or give a lot of aid.” China’s abundance of economic resources and capabilities is just what the developing countries require, and China is doing it just right.

What can India do?

With the growing proximity and influence of China in the region, the significance of India is at stake. China is slowly taking over the neighbours of India, encircling it from all sides. It is about time to act on the reality that China’s achievements are detrimental to India. New Delhi needs to get done with its “laid-back” attitude. Gone are the days when it was acceptable to make errors. One small mistake could prove to be a huge setback for India. It needs to bounce back in the game and reclaim its position in the region. To begin with, India can work on the economic front by strengthening its bilateral trade with Bangladesh. In 2017, India announced a $5 billion loans for Bangladesh, which is the largest amount ever invested by India in Bangladesh. Such initiatives will maintain its prominence in the country.

Cultural exchange is another aspect through which both countries can work upon. The two Asian countries share a lot of cultural similarities, considering their history. This can enhance their relationship even more. India and Bangladesh are member states of regional organisations like the South Asian Association for Regional Cooperation (SAARC) and the Bay of Bengal Initiative for Multi-Sectoral Technical and Economic Cooperation (BIMSTEC). These organisations should be functional to encourage regional synergy. The ‘Neighbourhood First’ policy should be given the optimal preference to enhance bilateral ties in the region. This will further help to strengthen India’s preeminence and assurance in South Asia.

Establishing prominence, however, comes with conditions. India should cease itself from being involved in the internal politics of Bangladesh. China’s concept of non-interference alongside its economic investment has worked well in its favour. India should try to do the same. Meddling in domestic matters of other countries should be a strict no-no.

There are long-pending disputes between India and Bangladesh. One such important dispute is the Teesta water treaty. This is one of the reasons impeding the chances of betterment in the relationship between them. The countries should come to the table to work on a plausible deal to solve it. This will help in bringing ease in tensions to some extent between them.

Beijing’s influence in world politics is inevitable and India has to live with the fact. It should, therefore, try its best to maintain a strong stance and counter China’s influence in the Indo-Pacific region. India should adopt every measure possible to foster regional cooperation to deter an extreme change in the dynamics of power politics in South Asia. The US could also bounce back to revive its relevance in the region and what better way than to partner with India! Together, they could promote regional balancing with win-win situations for the countries, in substitution to the debt-trap policy of China. As the Indo-Pacific region is slowly being engulfed by the dragon, it is the right opportunity for India to exhibit its potential of being the-next-big-thing!