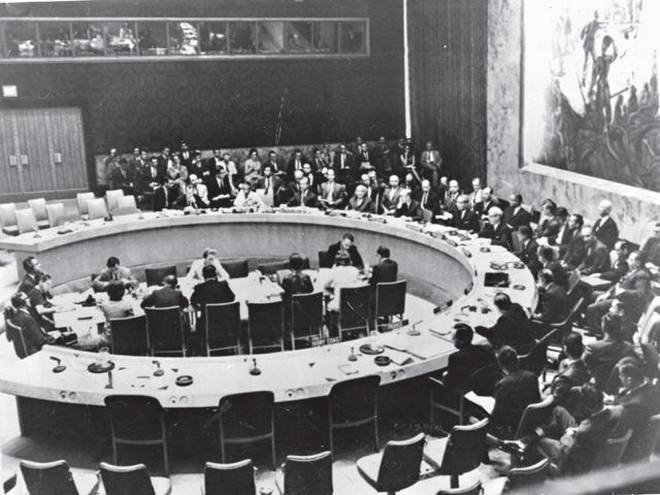 The Security Council voted on this Resolution on 21-4-1948 with the following result:

Original Texts of the Security Council Resolution 47 – Resolution of 21 April 1948:

Having considered the complaint of the Government of India concerning the dispute over the State of Jammu and Kashmir, having heard the representative of India in support of that complaint and the reply and counter complaints of the representative of Pakistan. Being strongly of opinion that the early restoration of peace and order in Jammu and Kashmir is essential and that India and Pakistan should do their utmost to bring about cessation of all fighting. Noting with satisfaction that both India and Pakistan desire that the question of the accession of Jammu and Kashmir to India or Pakistan should be decided through the democratic method of a free and impartial plebiscite, Considering that the continuation of the dispute is likely to endanger international peace and security, Reaffirms its resolution 38 (1948) of 17 January 1948;

Instructs the Commission to proceed at once to the Indian subcontinent and there place its good offices and mediation at the disposal of the Governments of India and Pakistan with a view to facilitating the taking of the necessary measures, both with respect to the restoration of peace and order and to the holding of a plebiscite by the two (Governments, acting in co-operation with one another and with the Commission, and further instructs the Commission to keep the Council informed of the action taken under the resolution; and, to this end.

Recommends to the Governments of India and Pakistan the following measures as those which in the opinion of the Council and appropriate to bring about a cessation of the lighting and to create proper conditions for a free and impartial plebiscite to decide whether the State of Jammu and Kashmir is to accede to India or Pakistan.

A – RESTORATION OF PEACE AND ORDER

1. The Government of Pakistan should undertake to use its best endeavours:

(a) To secure the withdrawal from the State of Jammu and Kashmir of tribesmen and Pakistani nationals not normally resident therein who have entered the State for the purposes
of fighting, and to prevent any intrusion into the State of such elements and any furnishing of material aid to those fighting in the State;

(b) To make known to all concerned that the measures indicated in this and the following paragraphs provide full freedom to all subjects of the State, regardless of creed, caste, or party, to express their views and to vote on the question of the accession of the State, and
that therefore they should co-operate in the maintenance of peace and order.

2. The Government of India should:

(a) When it is established to the satisfaction of the Commission set up in accordance with the Council’s Resolution 39 (1948) that the tribesmen are withdrawing and that arrangements for the cessation of the fighting have become effective, put into operation in consultation with the Commission a plan for withdrawing their own forces from Jammu and Kashmir and reducing
them progressively to the minimum strength required for the support of the civil power in the maintenance of law and order;

(b) Make known that the withdrawal is taking place in stages and announce the completion of each stage; When the Indian forces shall have been reduced to the minimum strength mentioned in (a) above, arrange in consultation with the Commission for the stationing of the
remaining forces to be carried out in accordance with the following principles:

(i) That the presence of troops should not afford any intimidation or appearance of
intimidation to the inhabitants of the State;
(ii) That as small a number as possible should be retained in forward areas;
(iii) That any reserve of troops which may be included in the total strength should be located within their present base area.

3. The Government of India should agree that until such time as the plebiscite administration referred to below finds it necessary to exercise the powers of direction and supervision over the State forces and policy provided for in paragraph 8, they will be held in areas to be agreed upon with the Plebiscite Administrator.

4. After the plan referred to in paragraph two (a) above has been put into operation, personnel recruited locally in each district should so far as possible be utilised for the re-establishment and
maintenance of law and order with due regard to protection of minorities, subject to such additional requirements as may be specified by the Plebiscite Administration referred to in paragraph seven.

5. If these local forces should be found to be inadequate, the Commission, subject to the agreement of both the Government of India and the Government of Pakistan, should arrange for the use of such forces of either Dominion as it deems effective for the purpose of pacification.

6. The Government of India should undertake to ensure that the Government of the State invite the major political groups to designate responsible representatives to share equitably and fully in the conduct of the administration at the ministerial level, while the plebiscite is being prepared and
carried out.

7. The Government of India should undertake that there will be established in Jammu and Kashmir a Plebiscite Administration to hold a Plebiscite as soon as possible ()n the question of the accession of the State to India or Pakistan.

8. The Government of India should undertake that there will be delegated by the State to the Plebiscite Administration such powers as the latter considers necessary for holding a fair and
impartial plebiscite including, for that purpose only, the direction and supervision of the State forces
and police.

10. (a) The Government of India should agree that a nominee of the Secretary-General of the United Nations will be appointed to be the Plebiscite Administrator. The Plebiscite Administrator, acting as an officer of the State of Jammu and Kashmir, should have authority to nominate the assistants and other subordinates and to draft regulations governing the Plebiscite. Such nominees should be formally appointed and such draft regulations should be formally promulgated by the State of Jammu and Kashmir.

13. The Government of India should use and should ensure that the Government of the State also use their best endeavour to effect the withdrawal from the State of all Indian nationals other than those who are normally resident therein or who on or since 15th August 1947 have entered it for a lawful purpose.

(a) all citizens of the State who have left it on account of disturbances are invited and are free to return to their homes and to exercise their rights as such citizens;
(b) there is no victimisation; minorities in all parts of the State are accorded adequate protection.

15. The Commission of the Security Council should at the end of the plebiscite certify to the Council whether the plebiscite has or has not been really free and impartial.

16. The Governments of India and Pakistan should each be invited to nominate a representative to be attached to the Commission for such assistance as it may require in the performance of its task.

17. The Commission should establish in Jammu and Kashmir such observers as it may require of any of the proceedings in pursuance of the measures indicated in the foregoing paragraphs.

18. The Security Council Commission should carry out the tasks assigned to it herein.