The US Presidential Elections: How the Democratic Left has been rendered bifurcated and weak 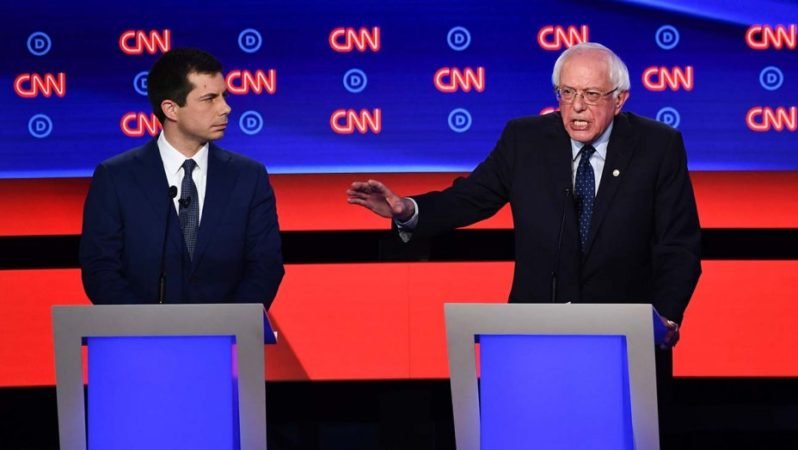 Democracies all across the globe are slowly subsuming into a dichotomy created from the polarization of both left-wing and right-wing politics. This, coupled with the rise in populism, has divided ordinary public opinion and has diminished the platform for any pragmatic compromise. The political division is overtly visible within the United States, especially with the ongoing presidential election campaigns. Well known presidential candidates like Bernie Sanders and Kamala Harris stand against the equally prominent household name Donald Trump, all three of whom are known for their stark, populist policies.

Much of the rise in contemporary left-wing politics can be characterized as a response to the rise in alt-right wing activity which saw a sudden surge with the election of Donald Trump as the 45th President of the United States. In the past decade, the US has seen an unprecedented increase in alt-right wing related crimes to an average of about 300 a year[i], so much so that white supremacism has become more of a threat than Islamic terrorism on the US soil. It was amidst this crisis of fascism that the Left saw a magnificent door of opportunity to administer a voice of social change that could perhaps bring in more votes from those individuals who were disproportionately targeted by the rise in the Alt-Right. Hilary Clinton’s staunch attitude toward America’s socio-economic structure had failed to incite the voters against Trump’s radical and notorious policy proposals. This was the beginning of the death of centrism and the first clear start in the enormous division of the political wings that we can see now.

The shift toward left-wing socialism is apparent not only in America with Sander’s extraordinary call for a socialist revolution but also in the United Kingdom with Jeremy Corbyn’s progressively leftist leaning in his socio-economic plans to implement a more state-managed economy. It is becoming increasingly clear that socialism has carved itself a prominent stage in present-day politics. Eminent socialist thinkers like Margaret Sanger and Kristen Ghodsee have long criticized the role of capitalism in compounding social inequality and with the days of the Red Army and Soviet communism behind us, socialism is once again emerging as a favourable ideology amongst left advocates. But if socialism really is the answer to our society’s economic malfunctions, then why are socialist ramifications making the Democratic Party weaker than before?

The answer to this is twofold: the policies that American socialism entails are largely nationalist which in and of itself contradicts Marxian socialism. For a theory that is international in nature and presumes an eventual breakdown of the nation-state structure, employing socialism under a nationalist vision often distorts its potential. Moreover, the dichotomy created between progressivists and socialists within the Democratic Party creates a generous rift between Democratic voters and soon enough neither of the sides have enough votes to win them a majority over Donald Trump. However, even Trump’s radicalism has caused him loss of support from Republicans across the party. In fact, Bill Weld, the Republican candidate running against Trump, has criticised the President for deliberately creating policies that centre around dividing the public and swaying public opinion rather than addressing economic problems prevalent in the country.

Nevertheless, for the Republican’s, the voter demographic is a little less complex. Majority of Trump’s supporters hail from less “ideological” leanings, that is, they are ordinary Americans whose relationship with politics is based on perceived direct advantage. According to ThoughtCo, a survey held by the Pew Research Centre revealed that Trump’s voter demographics are primarily white, older, and less educated people. Over 56 per cent of the Republican voters surveyed who were 65 years or older indicated that they felt favourably toward Donald Trump.[ii] Given his 2016 populist campaign, which is even stronger for the 2020 elections, these statistics don’t really come as a surprise. The common American is much more likely to vote for the stability offered by a leader who says what the public wants to hear than for a “revolution” which is backed by almost no logistical steps to initiate it.

Sanders vs. Buttigieg: two ends of a rope

Pete Buttigieg has emerged as an important centrist amongst the Democrats, having significant ideological clashing with Sanders. According to him, Sanders owed his 2016 success to the “novelty” of his campaign. But once this novelty of socialism wanes, so will Sanders tribe of influence. Only a recent political household name, Buttigieg has already criticized the policies entailing Sanders’ left-wing approach as those that exploit the scepticism amongst the lower middle class stemming from current economic instability. Although his pragmatic approach fails to branch away from stagnant Democratic policies, Buttigieg isn’t completely wrong in his claims. Political scepticism often translates itself into a general dissolution of trust from governmental structures, which, in the long run, could adversely impact the Democratic Party. This is already visible with the party’s increasingly ramified voter-ship.

Bernie Sanders had successfully tapped into the middle class’s discontent with their socio-economic situation, but he had done so through political rhetoric rather than decisive policies. His call for a “political revolution”[iii] was one backed by the grandeur of public allurement rather than a concrete plan. It isn’t wrong to say that America needs a revolution; the current capitalist system has only compounded inequality and worsened the climate crisis. But before America can have a revolution, it needs a leader and party that is strong enough to give direction to the policies that it voices.

Ultimately, the bifurcation of the Democratic Party is not because of a lack of potential in the theory of socialism but rather due to the growing polarization between centrism and leftism. With little grounds for reconciliation and the emerging socialism drowning in reactionary populism, as can be seen in Sanders’ rhetoric, the Democratic party is left amidst a tug of war, one which is strong enough to break the rope altogether and pave an easy success for the conservatives.