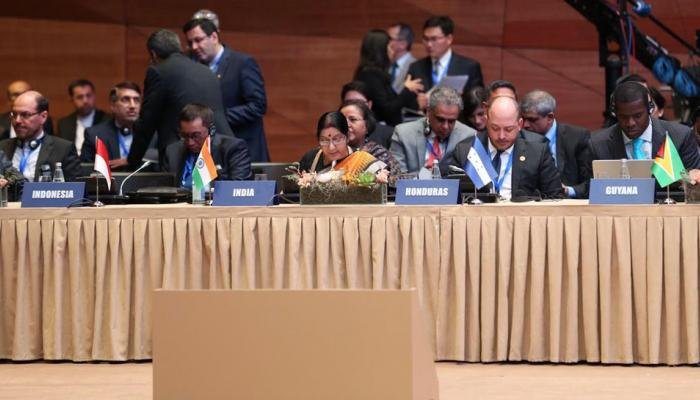 The working of the foreign policy of India since the 1990s has resulted in a happy note with the simultaneous expansion of good relations with the all major powers, growing importance in Asia and the Indian Ocean regions and growing importance in the international system. India is bound to change according to world politics milieu and national capability. The country has moved from its traditional pursuit of gaining the power to the level of sustaining and increasing power. However, in concentrating on major international issues and regional conflicts, India will have to find ways to fulfil the requirements of national interest. Luckily, the absence of confrontation among important players of power politics, in the last few years, has allowed India the luxury of converting the non-alignment perspective into an independent and pro-active foreign policy. Amidst potential new rivalries among the US, China, Europe, Russia and Japan at international allies so as to become at par with major powers. Having completed decades of its independence, India is mature enough to draft its foreign policy and strategy. India has become self–dependent in many sectors of development with noticeable economic growth and has acquired the ability to assume great power responsibility in the contemporary world system.

Foreign policy is the extension of domestic policy. While conducting foreign policy, the state makes sense of the scenario, situations itself into it, assesses its capabilities, national interest and priorities; and attempts to realise its goals. Goal realisation includes developing broad principles, adopting strategies and tactics and making commitments. Since 1947 to present-day India’s foreign policy witnessed three distinct historical phases. The first phase was the period from 1947 to 1962. It constituted the most idealistic phase of India’s foreign policy under Jawaharlal Nehru. During the period India played a significant role in multilateral institutions and particularly in the United Nations. Having emerged as a critical proponent of the non-aligned movement, it contributed towards the process of decolonisation.

The second phase of India’s policy of Non-alignment began with its defeat in the 1962 Sino–Indian border war, which marked a watershed in India’s, foreign and security policies. It saw a gradual shift away from the early idealism and the adoption of an increasingly self–help’ approach to foreign policy while retaining elements of the Nehruvian rhetoric. The post–Nehru era may be characterised as one of ‘modified structuralism’. Despite brief military cooperation with India in the aftermath of the 1962 war, the United States soon disengaged itself from South Asia after the Indo-Pak conflict in 1965 as it became preoccupied with the Vietnam war. Though India emerged robustly confident after the Bangladesh war, during the 1970s, its influence remained confined to the South Asian region. The United States forged a strategic relationship with Pakistan almost immediately after the Soviet invasion in Afghanistan.

The third phase began with the end of the cold war. But a more pragmatic foreign policy based on the principles of Realism was adopted much later. The end of the cold war presented India with a stark choice. During much of the 1990s, India was yet to come in terms with the emerging realities. India’s core principle of Non-alignment lost practicability in the wake of the post–polarity paradigm. During the Gulf War, India’s response was based on a faded image of itself as leader of the non-aligned nations. In the year 1996 India’s foreign policy calculations again went wrong on CTBT issue and filling five non-permanent seats on the Security Council. While the end of the cold war transformed the political landscape of Europe, it did little to ameliorate India’s security concerns. The primary task of Indian foreign policy since 1947 has naturally been to enable the transformation of India’s society and economy, restoring traditional patterns of dealing with the world, the building strategic autonomy of choice.

India’s approach to the world is naturally a function of our values, our history and geography, and of how we define our interests. Our strategic perspectives in the lost decades have been a product of the historical aberration that was the early twentieth century. Throughout history, India had been a society that was open, pluralistic and intensely engaged with the rest of the world. Accordingly, government of India set certain objectives which mention, inter alia, to present the autonomy of the decision-making process and to play a pioneering role in the establishment of stable, prosperous and secure global order; and to build an international environment which is supportive of India’s rapid economic growth including higher investments, trade, access to technology and strengthening India’s energy security. The objectives have been all the same since independence. But there is a sharp difference in the prevailing realities then and now.

In the new world order Manmohan Singh, the Prime Minister of India expressed the Indian approach to NAM in a statement in which he said, ‘Our stand is in full conformity with what our founding fathers would have liked us to do. Non-alignment is a state of mind and ability to exercise independent judgement on all issues. Defining the role of NAM during the 14th Havana summit on 15 September 2006 the Indian Prime Minister stated that the aim of NAM was not to divide the world further but to adopt approaches, which will further human civilization. The Declaration on the Purposes and Principles of the Non-aligned Movement in the present international juncture’ contains the essence of the decisions at Havana Summit in 18 points as desired of 118-member NAM that thrusts on multilateralism. The NAM is a powerful movement of ‘dissent’ against a hegemonic superpower.

But as time passed and the global power equations have changed, a sea change has also been taken place in the perception of Indian leadership towards the New International Order. There is a reflection of India’s attitude of indifference towards non-alignment. The Indian media threw light on such attitude as Shekhar Gupta wrote in The Indian Express, ‘Also, now anti– Americanism will not be ideological glue that once kept NAM together. You might say that NAM has come of age and emerged as more genuinely non-aligned, obviously because there is no Soviet bloc, whose faithful, the tail-wagging shadow it became for three embarrassing decades.

In addition, the perception and interests of the Indian ruling elites, of course, have undergone a sea change because they have equated all the major national goals with the rates of annual growth of Indian economy. On the eve of the Havana Summit, our Prime Minister Manmohan Singh stated,’ foreign policy is essentially a device to widen our development options. Hence, in order to ‘expand economic and other multifaceted contacts with other countries, India has to toss all the balls.’ It reflects that Indian foreign policy is driven by economic considerations. Thus, market-driven goals have come to dominate the values of Indian elite who looks for benefits from linkages with the global markets. The explanation for India’s indifference to the movement of Non-alignment can be found in the new economic orientations. The dominant economic classes are driving the foreign strategic and economic goals because a belief exists among the Indian elite that strategic friendship with western developed countries is the only way to achieve their interest of maximising economic growth rate.

The Convergence of Interests With Major Powers

In fact, the Indian political elite has somehow come to believe that there is a ‘convergence’ of interests between the developed capitalist countries and the fast-developing capitalism of India. The Indian market and its stock exchanges are rated by global investors including the powerful western banks. The United States and other Western countries are enthusiastic about the deepening of their bilateral relationship with India. Even David Cameron, the leader of the British Conservative Party stated, ‘in the 21st century, as the world’s centre of gravity moves from European and the Atlantic to the South and the East, I believe it is time for Britain and India to forge a new special relationship, to meet our shared challenges in the new era of international affairs.’

India, in its journey of foreign policy through the tenets of Non-alignment, has successfully moved from the days of the cold war to post-cold war and has reached the stage where it is trying to transform the nation into a great power, at least internationally. We have seen that the NAM without having no political, economic or military strength, successfully resisted the powerful nations including the United States of America and other allied countries. Non-alignment even in days of the cold war had meant much more than not being aligned with the two power blocs and the era of post-cold war or globalisation has inherited the basic themes of the policy which it makes today – alive, active and relevant. It is conceived as the voice of the former colonies and poor nations in a world overwhelmingly dominated by the rich western nations. Over the years another organisation, G-77 has also developed which takes up the cause of the developing countries in international fora on economic and development issues, is complementary to non-aligned movement. However, in recent decades Non-alignment has been defined in exclusively Indian national terms to enhance its independence or sovereignty and provide room for manoeuvres amidst diverse pressures to promote its ambitions and interests.

The fast-changing global scenario of the 1990s provided India with a more influential perspective to reset its policy preferences especially after the collapse of the Soviet bloc and the initiation of domestically radical economic reforms. The founding fathers of NAM saw the two objectives; national independence and the solidarity of developing countries. But the change over of the Indian perspective on Nam is being seen in the context of its revised foreign policy agenda, almost exclusively focused on transforming India into a big power. The way towards this objective, it is felt, is to start thinking big, join the rich man’s club and enter into friendly relations with the rich and powerful nations for economic, high-tech and military benefits and a place at the high table where the great powers decide the fate of humankind. To advance this agenda, friendship with the most technologically and economically advanced and militarily powerful nation, the United States is seen as the most promising path. The real challenge for India, at the juncture, is to maintain this friendship with the “strategic autonomy” to preserve the “strategic space” for itself.