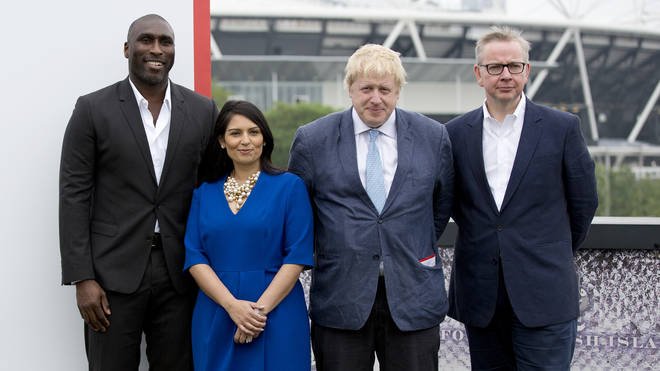 Elected leader of the Conservative party on Tuesday, Boris Johnson took over as Britain’s Prime Minister on Wednesday with a string of challenges ahead. He just has a little over three months to deliver the long contentious issue of leading Britain out of European Union by October 31 with or without a deal. To ensure that he achieves his target, Johnson has inducted pro-Brexit allies in his council of ministers which includes three Indian-origin MPs.

The blonde hair premier has sacked 19 ministers from the previous Theresa May-led government and has appointed Indian-origin Priti Patel as the next British Home Secretary, probably making her one of the most powerful Britons of Asian heritage. She was among the most vocal critics of former PM Theresa May’s Brexit strategy.

Johnson who served as the mayor of London earlier, himself has plenty of Indian connections. He has been described as a “son-in-law of India” by virtue of his now estranged wife Marina Wheeler’s Indian mother, Dip Kaur (formerly married to Khushwant Singh’s younger brother).

Johnson has time and gain advocated for deeper connect with New Delhi. So his choice of inducting a diverse and plural Cabinet doesn’t surprise.

47-year-old Patel is regarded as an avid supporter of Prime Minister Narendra Modi in the United Kingdom. During Modi’s landmark address at Wembley Stadium in 2015, Patel was present too. She also welcomed him after his arrival at Heathrow airport.

Patel was born in London to a Ugandan Indian family. She was educated at Keele University and the University of Essex. Margaret Thatcher is her hero.

Patel was first elected as an MP in 2010 from Essex and was perceived close to former British PM David Cameroon. Patel was seen as the face of the large and influential Indian diaspora in the Conservative government led by Cameroon.

In the EU referendum campaign, Patel launched an appeal to “Save the British Curry” which argued that a post-Brexit immigration system would be fairer to those from outside the EU and ease a shortage of chefs for Indian restaurants in Britain.

She was a member of the British Parliament’s influential Foreign Affairs Committee (FAC) which recently released its damning report warning that the UK was falling behind in the race to engage with India at the end of a lengthy Global Britain and India parliamentary inquiry. While presenting the report on the floor of the British Parliament, she had said, “The report covers many of the missed opportunities where the UK should be proactively and bilaterally enhancing our ties. Our report calls for the government to look again at the relationship between the UK and India. We are soon to have a new PM in the UK, which will provide a welcome change in how we engage with India’s re-elected PM Modi.” Her statement provides a clear platform that signals India will remain a top priority for the Johnson-led UK.

While serving as the International Development Secretary in 2017, Patel was forced to step down after a row erupted regarding her meeting with Israeli officials during a personal visit without informing the British Foreign Office. While May refused to heed to her defence, Johnson had supported her by saying that she was his ‘good friend’ and it was ‘quite right that she meets with people and organisations overseas’. Thus, Patel had to move back in the last rows of the Parliament from where she continuously opposed May’s Brexit plan and became her outspoken critic.

Patel formed a powerful group among the Tories who rejected May’s roadmap which eventually led to her resignation.

Her rapport with Johnson is well known and might play a role in further cementing India-UK ties.

Johnson has clearly rewarded hardline Brexiteers in his new cabinet. Sunak is the son-in-law of Infosys co-founder Narayana Murthy and writer Sudha Murthy.

Sharma, who served as the Housing Minister and Minister of State for Employment form earlier has been appointed as the Secretary of State for International Development. Prior to his election to the Parliament in 2010 from Reading West, Sharma worked in the banking sector for 16 years.