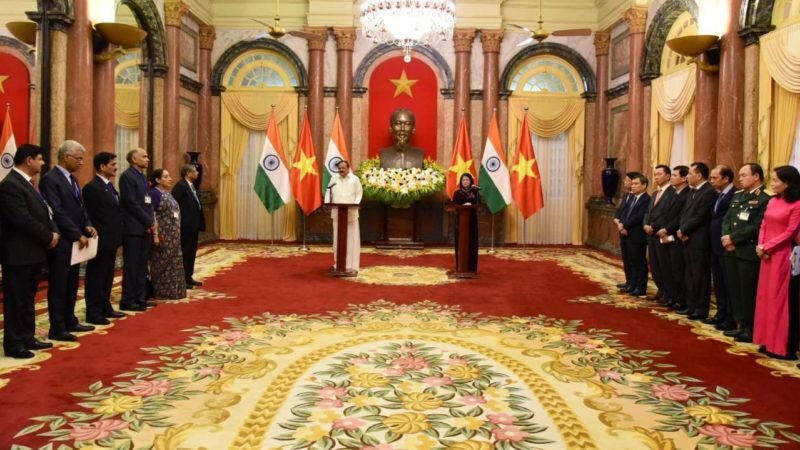 The Indian Vice President M. Venkaiah Naidu concluded his four-day visit to Vietnam on Sunday, 12th May. The official visit was undertaken as a response to the invitation extended by H.E. Ms Dang Thi Ngoc Thinh, Vice President of Vietnam. He was also invited by the organizers of the 16th UN Day of Vesak as the keynote speaker of the inaugural session for the event that took place in the Hanam province of Vietnam. Vice President Naidu’s visit led to discussions with his Vietnamese counterpart Vice President Thinh, Vietnamese Prime Minister Nguyen Xuan Phuc and Chairperson of the Vietnamese National Assembly Nguyen Thi Kim Ngan.

The relationship between India and Vietnam has been exceptionally cordial and friendly since the 1950s, with the relations having historical roots in the struggle for liberation and independence. While full diplomatic relations were established in January 1972, the relation between the two countries has continued to evolve. The two countries mutually agreed to raise the level of their relations from the previous ‘Strategic Partnership’ to a ‘Comprehensive Strategic Partnership’ during Prime Minister Narendra Modi’s visit to Vietnam in 2016. “Vice President Naidu’s visit has imparted momentum to the bilateral relationship and provided an opportunity to review various areas of collaboration and cooperation of the Comprehensive Strategic Partnership, with Vietnam’s leadership” and “his participation at the UN Day of Vesak Celebrations emphasized shared civilizational heritage of the two countries,” said a statement released by the Ministry of External Affairs of India.

The strong bilateral relationship between India and Vietnam is based on mutual trust, understanding and convergence of views on regional and international issues, which can be clearly noted from the extensive diplomatic interaction between the two countries. The Indian Vice President’s visit to Vietnam is only one of the various recent exchanges of high-level visits, which led to productive deliberation between the representatives of the two countries on issues of bilateral and multilateral cooperation. Vice President Naidu addressed Vietnam as “a civilizational friend and trusted partner, a strategic pillar of India’s Act East Policy and our key interlocutor in ASEAN.” In the larger context of relations between India and Vietnam, Vice President Naidu’s visit was an attempt to continue the longstanding tradition of building trust and goodwill between both nations. Among the several issues discussed, both parties agreed to strengthen cooperation in defence and security, peaceful uses of atomic energy and outer space, oil and gas, renewable energy, agriculture and innovation-based sectors, according to the earlier statement.

In his address at the Indian Community Reception in Hanoi on May 9th, Vice President Naidu noted with satisfaction that the trade between India and Vietnam had nearly doubled from USD 7.8 billion in 2016 to nearly USD 14 billion. In his press statement released on May 10th, he displayed confidence in the ability of both countries to achieve a bilateral trade target of USD 15 billion by 2020. These figures and claims indicate that the bilateral economic engagement between the two countries has been greatly strengthened in recent times, and the significance of this is acknowledged by both parties by expressed commitment towards increasing trade and investments. One of the noteworthy developments was Vice President Naidu’s statement about direct air connectivity between India and Vietnam, with the Indian civil aviation carrier Indigo leading the way by starting direct flights between the two countries. Vietnam seemingly has agreed to this development, keeping in mind the way in which such direct air connectivity will promote tourism, trade and people-to-people relations.

Building a prosperous and peaceful Indo-Pacific region on the basis of respect for national sovereignty and international law is an objective that is central to the partnership between the two countries and during Vice President Naidu’s visit, both sides took the opportunity to reaffirm their commitment to the same. Bilateral ties in the realm of security have deepened considerably between India and Vietnam under the Modi administration, with shared concerns about China and its activities in the South China Sea. The military cooperation and bilateral naval exercises between India and Vietnam, the most recent of which concluded in April 2019, clearly demonstrate that the aim is strengthening mutual confidence between both parties, as was claimed by the Indian navy in a statement following the exercise. Vice President Naidu stated that both countries are “fully committed to an open, transparent, inclusive and rules-based regional architecture based on freedom of navigation and overflight, unimpeded economic activities and peaceful settlement of disputes in accordance with the international law.”

India’s longstanding development partnership engagement was appreciated by Vietnam’s leaders. Vice President Naidu stated that India is committed to continuing its developmental assistance to Vietnam and that India felt “privileged to have contributed to Vietnam’s agricultural revolution and food security.” More than 130 scholarships under the ITEC programme and around 48 scholarships for higher studies in India provided by the Indian Council for Cultural Relations are offered according to Vice President Naidu, which is welcomed by the Vietnamese leaders. The Archaeological Survey of India has been working for the conservation and restoration of the UNESCO World Heritage Site MySon in Vietnam for the past three years and Vice President Naidu mentioned that assistance would be expanded to the Cham community in Ninh Thuan province through the implementation of grants-in-aid projects. Another example used by Vice President Naidu to express the reliability of India as a developmental partner to Vietnam was the ongoing Jaipur Foot Artificial Limb Fitment Camp in the provinces of Quang Ninh and Yen Bai in Vietnam, organized by the Government of India under the ‘India for Humanity’ programme as a commemoration of the 150th birth anniversary of Mahatma Gandhi. He took the initiative to visit the camp on 11th May and interacted with some of the beneficiaries of the services of the camp and the Indian-made prosthetic limb.

In his keynote address at the 16th UN Day of Vesak at the Tam Chuc Pagoda, Vice President Naidu claimed in the presence of the Prime Minister Phuc, the Malaysian President Win Myint, the Nepali Prime Minister K P Sharma Oli and several other dignitaries, that “we are civilizationally linked through Lord Buddha’s universal message of peace, compassion, harmony and welfare for all.” Based on this premise, he advocated the need for a Buddhist approach to global leadership in order to create a sustainable world. Appealing to the shared heritage of Buddhism, he aimed to facilitate cooperation to “uphold the ideals of Lord Buddha and promote values of peace, accommodation, inclusiveness and compassion in the policies and conduct of the global community.”

Vice President Naidu took out time during his visit to pay respects at the Monument of National Heroes and Martyrs at the Ho Chi Minh Mausoleum at Hanoi. In his address at the Indian Community Reception in Hanoi, he focused on the overseas Indians who were described as ‘India’s cultural ambassadors’, acknowledging that “Indians, Indian business and industry in Vietnam have been instrumental in promoting bilateral understanding and creating opportunities for the local economy and society.” Vice President Naidu further conveyed his gratitude to the Vietnam-India Friendship Association, the Vietnam Union of Friendship Association, the University of Social Sciences and Humanities, the Vietnam Academy of Social Sciences and the Ho Chi Minh Academy of Politics for taking initiatives and helping promote a better understanding of India and its culture in Vietnamese society.

Vice President Naidu extended an invitation to Vice President Thinh to visit India and expressed his pleasure at the possibility of hosting the Vietnamese leader. The importance of parliamentary exchanges and bilateral cooperation was emphasized upon by Vice President Naidu in his multiple speeches and addresses made during his visit. The official visit of the Indian Vice President and the subsequent invitation extended to his counterpart are representations of efforts made by both countries to build on bilateral relations that have been growing stronger in recent times. Such parliamentary exchanges facilitate deliberation at the highest levels of leadership and can be identified as measures that help in building trust and confidence between both countries. As Vice President Naidu in his press statement claimed that he was certain that his interactions with the Vietnamese Prime Minister and Chairperson of the National Assembly would “provide a new direction, momentum and substance” to the bilateral cooperation between the two countries, parliamentary exchanges such as these contribute to the realization of mutual goals and objectives and their eventual pursuit through cooperation. Vice President Naidu’s visit was considerably significant in revisiting the positive results of cooperation, introducing new initiatives and reaffirming former commitments to strengthen the bilateral relationship between India and Vietnam.