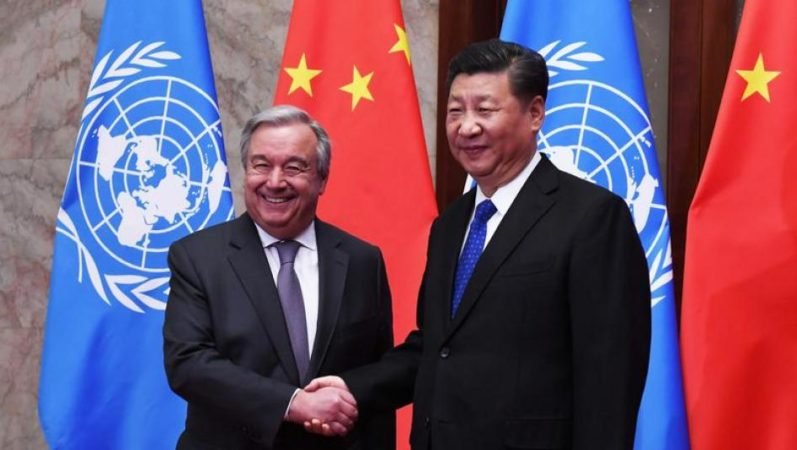 Beijing has faced growing international criticism for what it calls re-education and training centres in the Xinjiang region. There are several reports by the UN and human right organisations pointing towards mass detention camps holding more than 1 million ethnic Uyghurs.

Last month U.S. secretary of state lashed out on China in his series of tweets, highlighting Beijing’s human rights violation in the remote western region.

China has explained diplomats and journalists its re-education centres, revealing them that “absurd preachings” from Islamist extremists there had turned some Uyghurs into “murderous devils.”

UN Chief Guterres met with Chinese President Xi Jinping on Friday in Beijing on the sidelines of a summit on China’s Belt and Road initiative. According to U.N. sources, UN Chief has raised the situation in Xinjiang during a separate meeting with the Chinese Foreign Minister Wang Yi.

U.N. spokesman Stephane Dujarric told reporters on Monday, “The Secretary-General discussed all important issues with the Chinese officials … that includes the Uygher rights’ situation in Xinjiang,” he said, “What UN Chief told his Chinese interlocutors is that he fully stands by the initiatives of the UN High Commissioner for Human Rights Michelle Bachelet.”

Bachelet has frequently pressed Beijing to allow the United Nations access to investigate reports of disappearances and arbitrary detentions, especially of Uyghur Muslims in the remote Xinjiang region. China has previously said it would welcome U.N. officials if they avoided “intervening in domestic matters.”

Spokesperson Dujarric said UN Chief’s position on the issue was the same “in private as it is in public” and based on “the full regards for the unity and territorial integrity of China, condemnation of terrorist attacks as no cause or grievance can justify them, and that human rights must be fully considered in the fight against terrorism and in the prevention of violent extremism.”

“Each community must feel that its identity and integrity is respected and that it fully belongs to the nation as a whole,” he said.