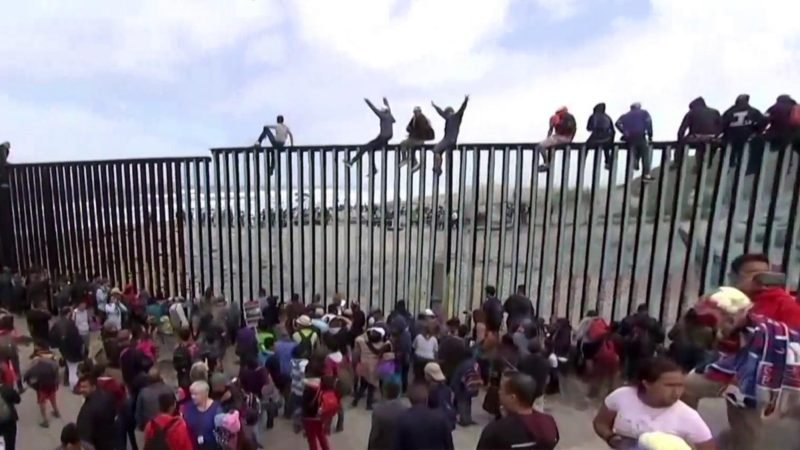 The latest developments at the USA-Mexico border are fascinating at best, not only because of the deep running tensions exposed but also because of the future that implies. Only 500 hundreds migrants, from South America, are plunging the Trump administration into a deep crisis. Weeks before the midterm elections, due to the formation of a 4000 strong caravan of migrants coming towards the USA, president Trump issued an executive order and moved military troops to the south. The objective was to stop the penetration of the American territory by the members of the migrant caravan. That caravan dissolved in Mexico, after traversing half of South America, the few remaining immigrants arriving exhausted and famished at the American border. Now, with all the protective mechanism in place, the almighty USA army has to deal with a few hundreds of migrants, organized and well prepared to enter the USA. The classic of images with the women holding babies in their arms, running from the tear gases circled twice the globe. What was supposed to be a little issue, became a political and ideological problem for the US government. These skirmishes regarding the tough immigration policy promoted by the American president are the result of a broader and more spectacular global game. One can observe that the migration phenomenon was weaponized already during the Obama administration. It became a far left main political subject and today the right to immigrate is pummeled by political pundits from Asia to Europe and the American continents. Everyone that opposes the right of people to move to another country at their desire and of their choice is immediately accused of being racist, bigot, white nationalist (in the case of Trump) and surely being against the progress of humanity. This ideological paradigm envelops and hides the real issue faced by immigrants, their problems and their real struggle, eliminating the possibility of a rational dialogue. Interesting enough, the same observer could argue that, given the global scheme that can be seen unravelling on different continents, there is a clear common strategy to promote massive population transfers from one side to another.

During the European migrant crisis in 2015, when more than one million migrants, from Syria, Iraq, Afghanistan and so on, arrived at the Balkans gates of the continent, the main issue, for the nations that were supposed to receive them, was the incredible magnitude of the numbers. A seemingly unorganized mass of people, almost all males in their 30’s and well fed did not ensure the classic image of the starving women with children running from war turned countries. The scale of the 2015 human motion of such magnitude was seen as something from the dark ages, happening again in the modern era. That migration crises in Europe deconstructed 70 years of western ideology and power structure. When German chancellor Merkel accepted to open the borders for that mass of migrants, Europe realized that a historical change took place. Not anymore sure of the laws in place and boundaries that protected their way of life, feeling threatened by the massive arrival of peoples and facing indefinable challenges (from feeding to economically integrating the newly arrived), the Europeans considered their post-war format and own political leadership as losing compass and its firm grounds. Thus the immediate and successful rise of the populist movements, all over the European countries. Europeans voted far right and populist movements in order to have their borders protected and immigration laws respected. Merkel paid the price and even if she is considered a seasoned powerful European name, the downfall of her administration in Germany will mean payback for the European nations that felt invaded during the 2015 migration crises.

Such a process is taking place in the USA. During the midterms, the Democrats pointed very clear that, if they win, new changes will be made to ensure a fluid and organized immigration from every corner of the world. A cultural war, doubled by, even tougher, ideological options, has taken aback entirely the American political elites.

This cultural war, engulfing everyone and everything, like a wildfire, is transforming the immigrants into a subject of epic proportions. Donald Trump is facing an uphill battle to preserve what he perceives as being the sacrosanct definition of the Republic, while Democrats (along with the far left, nihilist, globalist and neo-Marxist movements) are promoting a full rewriting of same Republic founder’s principles.

This incredible construction of hate and disagreement, decimating the foundations of the greatest military and economic power in the last eight decades, can prove to be more than America can sustain. The risk of a clash between far left and far right movements, left alone by scared voters can undo the greatness of the United States. In the shadows, China is waiting, calmly and smiling, to take over the American place.