The Double Down Game : The Faithful Patriot and Caravan 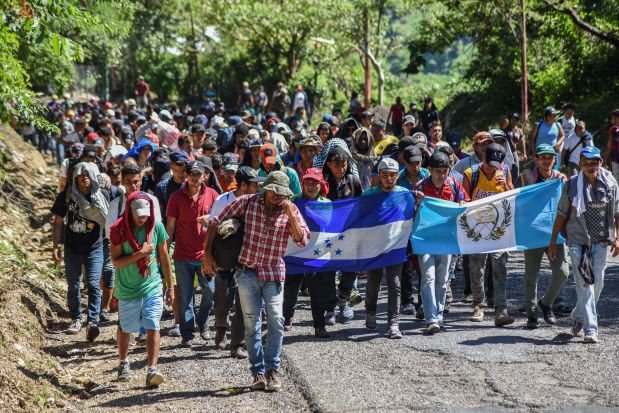 “The faithful patriot” military deployment, ordered by President Trump to shield the south border of the United States with Mexico is an example of how long the current American administration is willing to go in order to respect the campaign promises regarding illegal immigration. Designed, by the US Armed Forces, as an only domestic deployment and civil contingency operation, the transfer of military troops down south the border with Mexico is the tough answer to the newly organized and thousand strong caravans of immigrants.

The Posse Comitatus Act, enacted in 1878, is forbidding the US government to use military forces inside the national territory. As such “The Faithful Patriot” operation will send only support troops, aviation and medical support. The deployed armed forces will not be allowed to interfere with the border police or National Guard activities. Under the strong interdictions from the 1878 law, the military sent to the border will not be allowed to arrest, detain, interrogate nor interject with any acts of policing of the border.

The caravan is slowly emerging towards the border between Mexico and the United States. Originating from Honduras, a country known for its extreme violence and general poverty, the line of the immigrants sent political shock waves all the way in Latin America. We should not forget that Brazil, just days ago, elected a far-right president, Bolsonaro, exactly as a replica to the Venezuelan wave of immigrants, running from the socialist Maduro and his failed socialism.

The US establishment considers the caravan as “organised invasion” of the American territory. Rumours about the organizers are swirling in Washington. From accusations of drug financing to the hard leftist propaganda encouraging the caravan, the capital of USA is seeing this event as a provocation in the wake of the upcoming midterms elections. The timing could not be less, as the 4000 strong caravans is expected to arrive at the border with the US within days.

Thus, this event became more and more a subject of a menace to the sovereignty of the US, being used by both the republicans and democrats as an efficient hot button to be exploited in the mid elections, on November 6th. After two back to back acts of terror, the bombs mailing and the Pittsburgh synagogue attack (that resulted in 11 dead and dozens wounded), the Latin caravan is becoming a central topic for the American electorate.

President Trump wants to prove he is tough and resilient in front of this threat, ordering the deployment of National Guard troops, in addition to the already increased Border Patrols. Democrats are using this subject as an argument in favour of their theory that Donald Trump wants to impose an authoritarian government, disrespecting human right to immigrate, seen as fundamental criteria for what is the US becoming.

Both political parties do fight for survival. First, the next coming midterms would see a shift, the first in the last 6 years, from a Republican House to a Democrat-dominated one. The new Democrat house would bring the Trump administration to a halt, the Democrats promising that they will do everything in their power to boycott all Trump’s political initiatives. With this serious menace hanging above their heads, the Republicans are doubling down on issues like illegal immigration, violence and threats to the American civilization, in order to maximize their votes and keep their legislative majority. These midterms are crucial for both actors and for Donald Trump even more. If his party loses the House, retaining only the Senate, he is sure of a strong opposition to his policies and his next two remaining years in office will be marred by attacks.

The name of the deployment is symbolic as well. “The faithful patriot” is appealing to the American middle age and Christian. Opening the dialogue towards all christians, gender neutral and colour blind, the patriot supposedly votes for the right candidate and the right party. The one that protects the territory of United States. A balancing act between the conservative values of Trump and immediate action required in face of a perceived threat, the double down game have its merits but also its risks. Only the next elections will tell us if the game paid off.