As Greece emerges from bailout, what you need to know

Greece officially emerges from the eurozone’s record bailout today, after almost a decade of rescue packages, austerity and public spats with its lenders.

The European Union, the European Central Bank and the International Monetary Fund provided more than 260 billion euros in loans to Greece after the financial crisis, spread out over three bailout programmes in 2010, 2012 and 2015. It was the biggest bailout in history, and it ended on Monday – though Greece still carries Europe’s largest debt burden. So what does this step actually mean for its economy? Here are five things you need to know as Greece starts a new chapter:

1. The rescue programme is over, but Greece will be closely watched

The European Stability Mechanism – known as ESM, the region’s rescue fund – will provide no more loans or debt relief as the country’s economy is considered to be broadly back on track. “For the first time since early 2010 Greece can stand on its own feet,” Mario Centeno, who chairs the ESM board of governors, said in a statement. “It took much longer than expected but I believe we are there: Greece’s economy is growing again, there is a budget and trade surplus, and unemployment is falling steadily.” However, Greece will be monitored more closely than other eurozone countries that received similar loans because of the unprecedented size of its rescue package, according to the ESM’s Managing Director, Klaus Regling. As part of this continued supervision, known as “enhanced surveillance”, officials from the ESM and other European institutions will visit Greece every three months to assess its fiscal situation and progress on reforms.

2. Economic recovery – from a very low base

Greece’s economy is still 25% smaller than when the crisis began, but it is slowly growing again. Unemployment, which soared to more than 27% during the eight years of austerity, is now just under 20%. Greece’s public deficit sparked the crisis when the country admitted that it had covered up its financial problems: in 2009, its deficit had swelled to more than 15% of the gross domestic product, five times the EU limit. But this shortfall has now been turned into a budget surplus.

Given the tight monitoring process, the mountain of debt and the need to convince bond markets that it is a reliable borrower, Greece will have to stick to a path of strict fiscal discipline. This means that while the bailout programme is over, austerity is likely to continue. 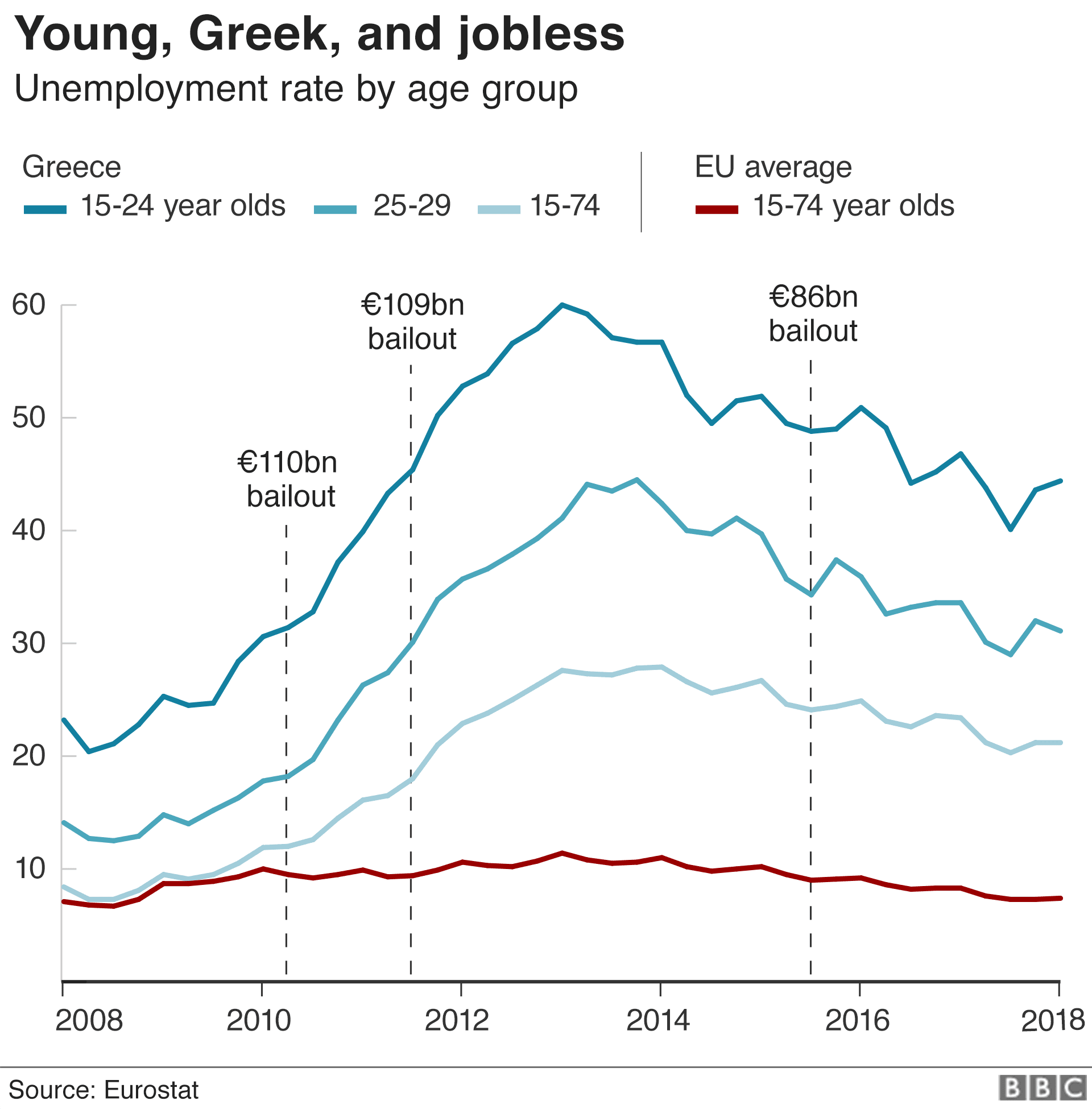 During the crisis, ordinary Greeks saw their pensions and salaries slashed even as taxes rose to plug the public deficit. Among the hardest-hit are the elderly, who are struggling to pay for basic items like food and clothing, and the very young. At the peak of the crisis, a quarter of Greek children lived in poverty. Greece’s gradual economic recovery will hopefully improve their prospects, but for those whose early years were blighted by the crisis, the damage is done. Studies have shown that childhood poverty is linked to poor health, which can have a lifelong impact. 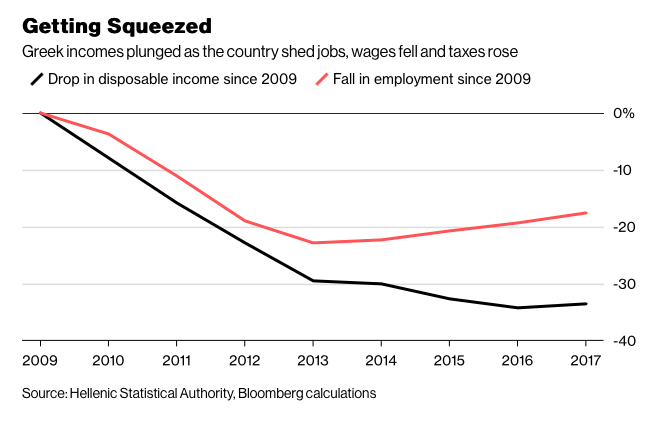 On the other hand, Greece’s people are perhaps its greatest asset. Greece ranks 87th in the World Economic Forum’s Global Competitiveness Index, dragged down by high tax rates, inefficient government bureaucracy, political problems and insufficiently innovative firms. But it ranks much higher – 44th – in terms of higher education and training. There is an abundance of Greek scientists and engineers. This is particularly impressive given the difficult economic environment.

Greece faces a challenging credit market and is trying to show investors that it is serious about fiscal discipline. This means more pressure on its citizens. It has agreed to cut pensions again in 2019 and aims to produce a budget surplus of 3.5% through 2022. Global hikes in interest rates and currency crises in some emerging economies, like Turkey, are adding further complications. Economists argue that the key to recovery is strong growth in the coming years. In fact, growth is showing signs of a rebound, with GDP expected to increase by about 2% this year. And tourism is booming to the point where Greece is worried about becoming too popular – a problem that less attractive destinations can only dream of. The problem is how to reconcile the need for growth with continued austerity, as higher taxes are weighing on small businesses and hindering investment. Tax rates are the most problematic factor for doing business in Greece, according to the World Economic Forum’s Global Competitiveness Index.

Greece’s talent pool is now invigorating other economies: nearly half a million Greeks have left to work abroad since the crisis started. Many Greek professionals now thrive in Germany, for example. At the forefront are Greek engineers, whose career prospects are closely tied to public investments in infrastructure and technology.

There is hope that a recovery could reverse the brain drain. Greece does better in terms of its technological readiness than for other measures of competitiveness. It’s seen a steady increase in the number of Internet users, and while Greek firms are not yet integrating the latest technologies into their processes, doing so could provide an easy boost to productivity and profit margins. Ultimately, Greece’s recovery depends on an environment in which its skilled, enterprising and innovative workforce can flourish – and in which new businesses thrive. Greek start-ups and workers’ co-operatives are rising out of the ashes of the crisis. The challenge will be to design institutions and policies that encourage their efforts, support innovation, and allow Greeks to invest in their future.

Sophie Hardach is a writer with a specialism in economics. She has worked as a correspondent for Reuters news agency in Tokyo, Paris and Milan and has written for a number of publications including the Atlantic, the Guardian and the Daily Telegraph.