The Asian Century Could Belong to India 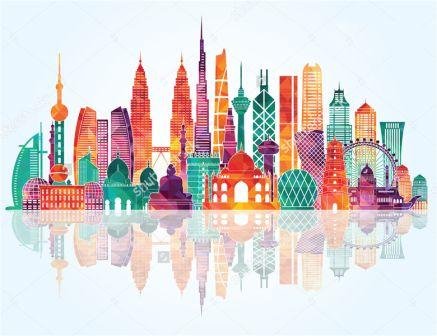 “As I argue in my new book, “Asian Century … on a Knife-edge”, over the course of the twenty-first century, India could well emerge as Asia’s leading power. Already, India’s economy is growing faster than China’s, a trend which could continue, unless China gets serious about economic reform. Further, India’s population will overtake China’s in 2022 and could be some 50% higher by 2100, according to the UN. And moreover, India has more friends among other Asian countries than does China.

In short, India is a slow burner compared with China, but it is moving decisively ahead.  The Asian Century could well belong to India.” – John West*

India has never managed to achieve three decades of 10 percent annual economic growth rates like China has. But in all its long history India has never had a centralized, authoritarian regime like China has had for over 2000 years, which could provide strong political leadership. India is an immensely diverse country, which is essentially a creation of the British Raj and the Indian railway system that it built.

“No one person could change this country with 320 languages”, once said Singapore’s, Lee Kuan Yew. This diversity makes governance in India more complex than in China. But the Indian economy has performed very well these past 25 years, and the prospects for continued development may well be very good.

India is indeed a country with a great deal of potential. For example, Indians who have migrated to the US, and their descendants, earn on average $88,000 a year, compared with $66,000 for all Asian Americans, and $50,000 for Americans overall.  Indian success stories in the US include the CEOs of Microsoft (Satya Nadella), Google (Sundar Pichai) and Pepsi (Indra Nooyi). Indian companies like Infosys, Mahindra, Mittal, Reliance and Tata succeed famously on world markets. The Indian movie industry produces more films than any other country. And the Indian Premier League is the world’s most lucrative and popular cricket tournament.

And yet, the Indian economy was for many years a chronic underperformer. During India’s first four decades of independence, the economy chugged along at the “Hindu rate of growth” of about 3.5 percent (or 1.3 percent in per capita terms) from the 1950s to the 1980s. Despite a vibrant democracy, India’s economic policies drew more inspiration from the socialism of the USSR than the capitalism of East Asia or the West. This was typical of many countries at the time, which sought to achieve economic independence through inward-looking policies, once they had achieved political independence.

A financial crisis in the early 1990s triggered a wave of economic liberalization and reform. During the following 25 years, the Indian economy has averaged 6½ percent annual growth and is currently the world’s fastest-growing large economy with growth of around 7½ percent. India’s GDP per capita more than tripled over this period, with the information technology sector playing a leading role.

The timing is right for India to become an industrial power, as China is now suffering from increasing wages, and investors like Japan are looking for new low-cost locations. This is where Prime Minister Modi’s business-friendly policies are helpful. | Image: Indian Prime Minister Narendra Modi with his Chine counterpart Xi Jinping | The Hindu

Thanks to India’s positive economic developments, the share of the population living in extreme poverty (less than $1.90 a day) has more than halved over the past decade to around 20 percent. But this amounts to some 270 million people who are still suffering in “Incredible India”. And despite this impressive achievement, almost 40 percent of the Indian population is caught between $1.90 and $3.10 a day in a situation of near poverty. India suffers from hunger more than most every other Asian country, even North Korea and Bangladesh. The Indian government desperately needs to raise more taxes to provide basic services to its citizens—the OECD reports that less than 6 percent of Indians pay personal income taxes.

India’s GDP per capita remains less than half that of China, and about one-tenth of America’s. India’s ranking as the world’s third-biggest economy, as well as its status as an emerging power, is highly dependent on its enormous population. And like most countries which aspire to great power status, India is spending heavily on its military and space program. On the occasion of the launch of a rocket carrying satellites, Prime Minister Modi reportedly said it marked a “moment of immense joy and pride for India”.

India has suffered from rising inequality in most Asian countries. This has tempted Jean Drèze and Amartya Sen to observe that India looks “more and more like islands of California in a sea of sub-Saharan Africa”. And it is true that beyond the glitter of high-tech Bangalore, Bollywood and Indian cricket, India remains a rural country, with two-thirds of its population living in the countryside. But it is also undeniable that India has made immense progress. As someone who has visited the country in 1975, 1992, 2014 and 2017, I must say that India’s progress is palpable.

In the 2014 national elections, the deeply corrupt and incompetent National Congress Party, the party of Nehru and Indira Gandhi, was soundly beaten by the Bharatiya Janata Party (BJP), under the leadership of Narendra Modi. This was the world’s biggest exercise in electoral democracy and was widely applauded for its transparent, impartial and correct implementation. What is more, the transition of power from one party to the other went very smoothly. Indian governance may have its problems, notably widespread corruption, but its elections do work well. India’s politics may seem chaotic compared with China’s. But over the longer term, China’s institutions may be more brittle and fragile, relying as they do on repression, censorship and propaganda.

Prime Minister Narendra Modi has been now leading the country for over four years. He promises so much, based on his successful pro-business leadership as chief minister of Gujarat state for over a decade. However, despite Modi’s impressive reforms to date, India would still be a very difficult country in which to do business, according to the World Bank which ranks it 130th out 189 countries surveyed. The OECD judges Indian policies to not be “competition-friendly”; however, it does note a positive trend for barriers to entrepreneurship, and trade and investment. There has been another positive trend in the World Economic Forum’s Global Competitiveness Report where, after five years of decline, India has bounced back over the past two years to 39th place out of 138. This is due to significant improvements initiated by Prime Minister Modi, whose pro-business, the pro-growth and anti-corruption stance has improved the business community’s sentiment toward the government.

India’s human capital development is also hampered by one of the very worst education systems in Asia. By some estimates, half of the Indian population would be functionally illiterate. Even at the elite level, not one Indian university figures in the world top 200. India spends next to nothing on public health. Improving human capital will be critical for taking advantage of the half a billion young Indians who will enter the labour force over the next decade. Already more than 30 percent of Indian youths aged 15–29 are not in employment, education or training, highlighting the immense challenges of reaping the demographic dividend of its youth bulge. Social discrimination is also rife in India, with a long list of victims like lower castes, religious minorities like Muslims and Christians, indigenous and tribal groups, and women.

A major element that has been lacking in India compared with East Asia has been the development of a strong manufacturing sector. India’s manufacturing sector has been stuck at around 15 percent of GDP. The services sector, especially business process outsourcing and tourism, has been a key driver of the economy.

Read: The US Trade War: How China Should React

The East Asian model of urbanization and industrialization can be very effective for countries with large pools of lower-skilled labour. The model involves a structural transformation of the economy as low-productivity rural labour moves to urban areas to work in export-oriented factories. Today, industrialization could play an important role in India’s development, since it faces the challenge of creating jobs for masses of semi-skilled young people entering the labour market, and transforming this demographic bulge into a dividend.

Fortunately, Prime Minister Narendra Modi’s government is making efforts to develop its manufacturing sector. Major investments are being made in improving the country’s logistics in areas like coastal shipping, highways and railways, which would help move products around. Inspired by the government’s “Look East” policy, these efforts are being concentrated on the eastern side of the country, which is close to fast-growing Bangladesh and Southeast Asia. Special economic zones and economic corridors are also being developed.

The timing is right for India to become an industrial power, as China is now suffering from increasing wages, and investors like Japan are looking for new low-cost locations. This is where Prime Minister Modi’s business-friendly policies are helpful. For example, the implementation of a national goods and services tax will help transform fragmented India into a common market. The government has also liberalized some policies for FDI, including through a “Make in India” initiative, with the result that flows of FDI surged to well over $30 billion in each of 2015 and 2016. Leading companies like Foxconn, Softbank, Microsoft and Huawei are all now investing in India. Korean companies, in particular, are very successful in India.

“A growing share of this FDI comes from the Indian diaspora of over 30 million, the largest in the world, who Prime Minister Modi has been courting,” said Kingsley Aikins, CEO of DiasporaMatters. “Looking ahead, India’s ‘diaspora capital’ in terms of people, knowledge and finance will likely become a driving force for the Indian economy.”

Overall, there are strong grounds to be optimistic about India’s future, even if it remains an extremely long way behind the world’s leading economies in terms of GDP per capita, and economic, business and technological sophistication. In particular, Narendra Modi and his BJP party remain very popular and could stay in power for some time, which should enable India to make serious progress in its ambitious reform program.

As I argue in my new book, “Asian Century … on a Knife-edge”, over the course of the twenty-first century, India could well emerge as Asia’s leading power. Already, India’s economy is growing faster than China’s, a trend which could continue, unless China gets serious about economic reform. Further, India’s population will overtake China’s in 2022 and could be some 50 percent higher by 2100, according to the UN. And moreover, India has more friends among other Asian countries than does China.

In short, India is a slow burner compared with China, but it is moving decisively ahead. The Asian Century could well belong to India.

John is Adjunct Professor at Tokyo’s Sophia University where he teaches Japanese Business and Economy and Asia’s Economic Development. He is a Contributing Editor of FDI-Intelligence, a Financial Times magazine, where he writes on Japan and other Asian countries. He is also Executive Director of the Asian Century Institute. These current positions follow a long career in international economics and relations with major stints at the Australian Treasury as director of the balance of payments, OECD as head of public affairs and director OECD Forum, and Asian Development Bank Institute as a senior consultant for capacity building and training. John also taught globalization at the Institut d’Etudes Politiques (Sciences Po) in Paris.