How Yemeni women are fighting the war | Middle East Monitor 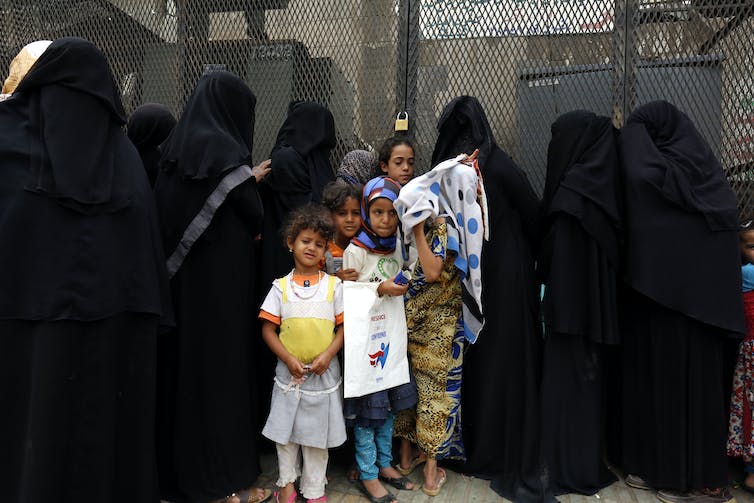 Yemeni women and girls wait to receive free bread provided by a charity bakery during a severe shortage of food in Sana’a, Yemen, 15 August 2017. EPA/YAHYA ARHAB

Since 2015, a Saudi-led coalition has waged war against Shia Houthi forces in Yemen. More than 8,000 people have been killed, and more than 49,000 injured; at least 69% of the population is reportedly in need of humanitarian assistance. Millions of Yemenis are facing starvation. Weapons circulation is widespread and uncontrolled: in 2016, a UN report estimated that between 40m to 60m firearms were circulating freely in the country.

The conflict has had a devastating impact on the women of the country. Household breadwinners are usually men; many are fighting, injured or killed. There is an economic crisis in the private sector, and many public sector jobs are no longer paying salaries. The health and security of the female population is endangered by exposure to cholera and other diseases. And then there’s the issue of child marriages: the severe poverty crisis means that prepubescent girls are married off to repay debts or to raise funds to feed the rest of the family.

A woman from the Northern Ibb region, which is occupied by the rebel Houthi army, explained the situation to a research team:

We live in a state of lawlessness: no security, no protection and no functional law enforcement authorities. A person may be shot dead for a trivial thing. The security situation doesn’t look like it did in the past. Now, there are informal groups behaving as if they were law enforcement authorities. These groups have power, and their power is the law. They use force against whoever disagrees with them or criticises their behaviour.

As the feminist scholar Cynthia Enloe has pointed out, women are crucial for war and play supportive roles for the military. Indeed, many Yemeni women are not victims of war or just escaping or hiding from this war. In many contrasting ways, they are actively supporting it, and not only on humanitarian grounds.

Although many Yemeni women discourage their family members from taking part in the conflict and very few take up arms themselves, they also help recruit men to the army. They also support combatants by cooking food for them and helping to distribute it.

A young woman, Nasseem Al-Odaini, whose family has fled to the neighbouring Ibb region, stayed behind in Houthi-occupied Taiz and initiated an organisation that assist the combatants that support the former government. As she told Middle East Eye: “We want to encourage the pro-government forces to advance in the province, by raising the spirits of the fighters”.

Other Yemeni women try to mitigate the impact of the conflict the best way possible. For example, women engage in humanitarian relief and in providing social and psychological support for people who have been traumatised by the war. They also engage in peace processes when they initiate discussions of the conflict in their communities.

Since the war is not equally intense in every part of the country, there are better possibilities for women to participate in peace processes around the port city of Aden, in the south, than it is in the north, where the Houthi army has taken control and Saudi coalition airstrikes are part of everyday life. Accordingly, women’s conditions and activities differ from one region to another.

In the north, local communities are more divided (between supporters and adversaries of the Houthi government) than in the south. When women enter the public and participate in charity work, they may be questioned by “de facto authorities” (read: the Houthi army) who, according to one woman, would try to prevent them from doing their work. They would also tell women that they are not allowed to appear in public before men:

They [the Houthis] are opposed to women playing a role in public life. According to them, the woman’s role is restricted to cooking and housework. They marginalise women; they deny their role in the community.

Women in the Northern and Southern parts of Yemen are not full citizens. According to Amnesty International, they “face discrimination in matters of marriage, divorce, inheritance, and child custody, and the state fails to take adequate measures to prevent, investigate, and punish domestic violence”. Discrimination against women in Yemen go back far beyond the war and are associated with local customs according to several studies. And yet, Yemeni women maintain their engagement in the development of their country.

During the popular uprising in the country in 2011 where hundreds of thousands of Yemenis followed the “youth movement” and protested against the corrupt reign of the then-president, Ali Abdullah Saleh, Yemeni women took to the streets to an extent that was unforeseen and unprecedented.

Many women participants were independent of political groups, but in the later stages of the protests the Islamic Reform party – inspired by the Muslim Brotherhood – managed to take charge of the protest movement, raising independent women’s concern that their rights would be disregarded.

However, independent women and women belonging to the political parties, including the Islamic Reform party and the Houthi political wing, Ansar Allah, constituted almost one-third of participants in the UN-guided National Dialogue Conference which followed the forced resignation of the President in November 2011. The aim of the 10 months long conference was to formulate a new and more democratic constitution for a united Yemen. However, the draft constitution which included a general 30% gender quota was rejected by the Houthi movement in September 2014, before the population had given their voice in a referendum.

By then disappointment with the process towards a new Yemen had given the Houthis wide popular support. They occupied major government institutions in the capital, Sana’a and removed the transition government recognised internationally. Interestingly, it was not the gender quota which made the Houthis reject the draft constitution, but the view to a power-sharing model which did not give them what they expected.

The Houthi movement’s occupation of the capital and seizure of government seemed to mark both the beginning of a war, and the end of momentum for women’s rights in Yemen – a country which generally figures in the lowest ranks of Arab gender equality indexes. In 2014, a group of women from diverse political backgrounds pushed for political solutions instead of war. Since then they have been sidelined from peace negotiations – but that doesn’t mean that Yemeni women have lost all hope.

Connie Christiansen is a Visiting associate professor, Lebanese American University. She wrote this originally for The Conversation