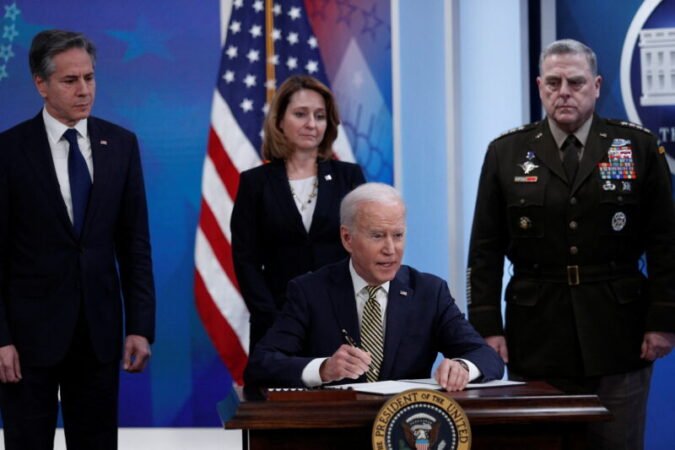 U.S. President Joe Biden with Secretary of State Antony Blinken, Deputy Secretary of Defense Kathleen Hicks and Chairman of the Joint Chiefs of Staff General Mark Milley as he speaks about assistance the U.S. government is providing to Ukraine amid Russia's invasion of the neighboring country, before signing an executive order on the aide in the Eisenhower Office Building's South Court Auditorium at the White House in Washington, U.S., March 16, 2022. REUTERS/Tom Brenner
PDF Button

How the United States played various types of cards to incite, pacify, and control the conflict indicates the strategy of the United States to Client state after 2014. Particularly in a larger context, the United States is attempting to increase its strategic influence at the global level by contrasting Ukraine’s military modernization and robust national security for the purpose of securing sovereignty. The United States attempted to control the energy crisis for European countries and its detrimental effects on the world economy, but it did not receive a favorable response from OPEC members. The implementation of numerous global economic sanctions aimed at isolating and weakening the Russian national economy. The United States’ national interest and its international agenda determine the aim of policy deeply.

Since 1975, public opinion has become a crucial consideration in US political decisions. Republicans (85%) and Democrats (88%) are in support of retaining tight economic sanctions against Russia following its three-week military invasion of Ukraine, according to American Trends Panel, while only 39% of Americans rejected this idea. As strong public support for Ukraine has been built up across party lines, this has influenced American policymakers’ decisions to provide Ukraine with much deeper assistance than other Western nations. (bipartisan support built the first phase of the United States’ motive of actions in general.

An American joint initiative Government of Ukraine’s Special Operations Troops, National Guard, and conventional forces have received more than $42 million in training, advice, and equipment from the Departments of State and Defense to help strengthen their institutional, tactical, and operational capabilities, according to Global Security Contingency Fund.

To show our longstanding and unwavering support for Ukraine’s security viability, the United States has committed more than $10.6 billion in security aid since January 2021. This includes the almost $9.9 billion that has been spent since Russia’s calculated, aggressive, and violent assault against Ukraine commenced on February 24. With the goal of assisting Ukraine in safeguarding its territorial integrity and preserving its borders, the United States has allotted more than $12.7 billion in security aid since 2014.

On the Historical Unity Between Russians and Ukrainians filled with resentment and spurious claims. Putin’s remarks about “blood ties” were the foundation for his claim that Russians and Ukrainians were “one people,” and Moscow had been “robbed” of its own homeland by a sophisticated West. In the age of cyber war, the conflict between Ukraine and Russia has also evolved into a narrative competition that uses propaganda warfare to manipulate public opinion (conversational receptiveness). Psychologists from various fields, including conflict resolution and negotiation, media psychology as a tool for successful subversion, and marketing management of propaganda warfare, have explored these topics. United States has been able to design and craft a more psychologically convincing and less scary counter-public narrative at the international level in comparison to Russia, for instance, in the context of the Biden Administration’s decision to support Ukraine despite the lack of active political will to manage the crisis just before the invasion began.

A game to manage international order

After 1990, a European paradigm of complex interdependence and the limits of collaboration evolved. The Asian tigers were also lured to the European model of regional governance, which placed a strong emphasis on human security and development. In the same way that neo-realists agreed that the zero-sum game was relevant in the 1990 Kuwait War and the 2003 US invasion of Iraq, which had an impact on the international order, the United States stands to reinterpret and balance its hegemonic position in the face of certain constraints. Due to domestic economic demands, the Obama Administration discreetly refrained from implementing the Bush Administration’s offensive plan. As a futuristic vision for Pax- Americana, the Asia pivot policy was specifically designed to challenge China. In his second tenure, he began a smart balancing policy from the Indo-Pacific to Eastern Europe. Later, the Trump Administration introduced the America First policy, devoting greater attention to the Indo-Pacific region coupled with a continuity and change program in the context of south and West Asia.

With the consideration of national interest, the United States has been too heavily involved in the Ukraine-Russia War 2022. Prior to 2014, the majority of European nations were not particularly interested in increasing their defence budgets, but the NATO re-expansion policy resulted in a greater number of eastern European states joining the alliance, Ukraine Defense Contact Group. First, if National Security and border conflicts rise together with the building of unity among European countries to oppose offensive Russia as an evil, the United States plays as an extra-power with dualism cards akin to the cold war strategy: to balance international order and to manage regional Security blocs.

After the annexation of Crimea in 2014, U.S. intelligence cooperation with Ukraine continued, Yahoo News reported Wednesday. At the same time, the domestic media that demonized the CIA was launching military training programs for Ukrainian militia groups to improve their national’s ability to defend itself. Since the beginning of the war, the majority of the intelligence community’s activity has been kept under wraps. According to US authorities, Ukraine receives information from the US that Ukrainian forces have utilized to hit high-value Russian targets, including the flagship Moskva, CIA. In order to give information that Ukraine has leveraged to strike important targets, including the Russian navy’s flagship, the U.S. has relaxed early constraints on intelligence-sharing.

In order to counter Russia’s ability to hack into and steal from digital networks, the US is working to strengthen the cyber defense of Ukraine and other allies. While top officials anticipate that Putin may use US support for Ukraine as a justification to start a new campaign against an American election, agencies are also on the lookout for election influence or intervention from Russia. In the end, the US has made the decision that it will do everything in its strength to support the Ukrainian people while averting direct combat with the Russians, according to Dale Buckner, a veteran US Army Green Beret who now serves as the CEO of security company Global Guardian. The US has attempted to dispel rumors that it is directly aiding Ukraine in its attacks against Russians because it is worried that those remarks may be viewed as escalatory by Russian President Vladimir Putin. According to him, a third world war has been ruled out by Biden.

This precarious time for the world economy will hang over the two sessions. Inflation has flared nationwide in the US, as the November midterm elections get near, that pessimistic outlook and the reality that inflation shows little indication of slowing down mean troubles for President Biden and Democrats. Policymakers across the government have made it plain that assisting in the return of inflation to a more manageable pace is their top responsibility, but doing so mostly falls to the Fed. Climbing prices are weighing on voters’ wallets and thoughts. And Europe, which has been impacted by the Covid-19 pandemic’s supply-chain interruptions, a jump in consumer demand as economies have recovered, and, most recently, a rise in food and energy costs brought on by the Russian invasion. Rapid price rises have harmed workers and families in the Group of Seven countries and reduced the popularity of their leaders, particularly Mr Biden. “Seventy-seven percent of the panellists indicate the risks to U.S. economic growth are tilted to the downside this year, with monetary policy missteps representing the greatest downside risk” according to Wall Street economists.

Biden needs the ongoing armed war in Ukraine to remain in power, as State Duma Chairman Vyacheslav Volodin noted on his Telegram channel when remarking that the US Congress elections will take place in three and a half months. He is without another alternative. Nevertheless, it is a contentious political issue. Democrats have more consistent support than Republicans. At least some of Donald Trump’s supporters and Fox News contributor Tucker Carlson, who consistently raised pro-Moscow talking points on his show, picked up on his affection for Vladimir Putin. Democratic support is strengthened by the significant influence of Ukrainian Americans, who are estimated to number roughly one million, and that links to the vote bank underestimate of the ethic coordinating council.

Due to their preponderance in battleground states, they have much more influence. There are a sizeable number of Ukrainians in Ohio, and the state is hosting a Senate election. Pennsylvania has a Senate contest and Ukrainians live there, per Wendy Schiller, a professor of politics at Brown University. Democrats are running commercials in Wisconsin criticizing the sitting senator Ron Johnson and highlighting his trip to Moscow in 2018. Likewise, United States diplomacy has had an enormous effect on the electoral politics of the United States, and its agenda tends to overlook broad popular opinion in federal elections.

The United States has several immediate and long-term interests under the restraint and management of conflict strategy. The first is the projection of US arms performance to obtain the new arms market in Eastern Europe, which is why they have increased their investment in Ukraine while also developing threat models for other nations. The second US policy goal is to control the European energy market for Russian energy exports, but this effort was unsuccessful in the near term. However, the US has long-term plans to encourage the market of shale oil worldwide, particularly in Europe. Because of Putin’s errors, the United States could be able to utilize Ukraine as a client state to exert more control over the Kremlin, just as they did with Pakistan against India during the Cold War.  In order to counter the Russian-Chinese combination, the United States and Europe have increased their strategic ties. However, the international order is still in transition as it manages global and regional strategic competition while fostering cooperation to promote the world economy. United States’ lack of potential efforts to stop the Ukraine crisis displays the US government’s policy initiative at a negative level.