Germany has no option but to permit Russian uranium shipment 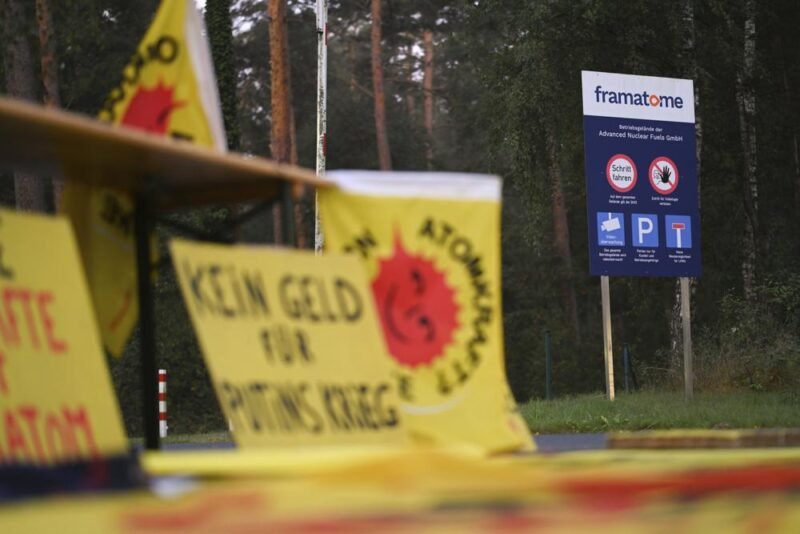 Protest posters are placed in front of the fuel element fabrication plant of the 'framatome' company in Lingen, Gerany, Monday, Sept. 12, 2022. The German government said Monday that it can't stop a shipment of Russian uranium destined for French nuclear plants from being processed at a site in Germany because atomic fuel isn't covered by European Union sanctions on Russia. (Lars Klemmer/dpa via AP)
PDF Button

The German government said Monday that it can’t stop a shipment of Russian uranium destined for French nuclear plants from being processed at a site in Germany because European Union sanctions on Russia don’t cover atomic fuel.

Environmentalists have called on Germany and the Netherlands to block a shipment of uranium aboard the Russian ship Mikhail Dudin — currently docked in the French port of Dunkirk — from being transported to a processing plant in Lingen, close to the German-Dutch border.

“We have no legal grounds to prevent the transport of uranium from Russia because the sanctions imposed by the EU due to the Russian invasion of Ukraine exempt the import of nuclear fuel … to the EU from import bans,” said a spokesman for Germany’s Environment Ministry, Andreas Kuebler.

Safety requirements for the shipment had been examined and found to meet requirements, meaning German authorities had to approve it, he added.

“You can imagine that we view such uranium shipments very critically due to the Russian invasion, but also because of Germany’s exit from nuclear in general,” Kuebler told reporters in Berlin, noting that the government has worked to close the processing plant in Lingen and a second in nearby Gronau.

The plant in Lingen is operated by Framatome, which is majority-owned by French utility giant EDF.

Environmental groups including the Russian organization Ecodefense urged European countries to end all uranium procurement from Russia, and cited the British government’s recent decision to block the Mikhail Dudin from offloading nuclear waste near Liverpool for processing there.

A handful of anti-nuclear activists staged a protest near the processing plants Monday, with placards carrying slogans such as “No money for (Russian President Vladimir) Putin’s war.”

Government spokeswoman Christiane Hoffmann said Germany continually reviews whether sanctions need to be expanded, but declined to say whether there were concrete plans to get the EU to block nuclear fuel imports.

Environment Ministry spokesman Kuebler noted that Russia is not the only supplier of uranium.

“Canada would be another possibility, for example,” he said.

EDF, which manages all of France’s nuclear power plants, didn’t directly respond to questions about the latest shipment. But in a statement, the company said its uranium supplies were “guaranteed by long-term contracts for periods of up to 20 years, with a policy of diversification in terms of sources and suppliers.”

The French government, which has a majority stake in EDF, didn’t immediately respond to a request for comment.

France is heavily dependent on nuclear power for its electricity needs, while Germany is planning to shut down its last three reactors this year and until recently relied strongly on imports of Russian gas.