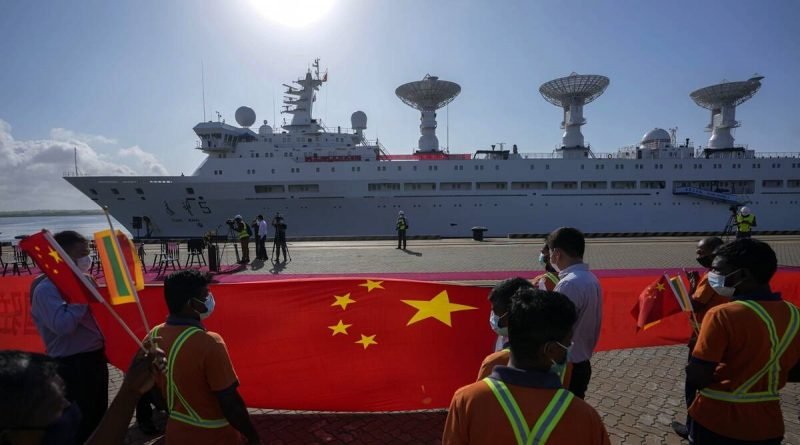 The much-contested diplomatic showdown over the port call of an alleged Chinese spy vessel in Sri Lanka seems to be coming down. The Chinese space and satellite tracking ship Yuan Wang 5 operated by the PLA was allowed to dock at the southern port city of Hambantota on the morning of 16 August by the Sri Lankan authorities. The ship was welcomed by the Chinese ambassador to Sri Lanka and other officials of the Port. The ship was scheduled to visit the port city from 11-15 august but was deferred on request by Sri Lanka after India lodged a strong protest with their Sri Lankan counterparts regarding its economic and security concerns.

The Ministry of Foreign Affairs Sri Lanka justified the clearance of the vessel after finding nothing adverse in terms of security violations with the visit. The ministry in its press brief dated 12 August 2022 noted that “Having considered all material in place, on 13 August 2022 the clearance to the Embassy of the People’s Republic of China was conveyed for the deferred arrival of the vessel from 16-22 August 2022,” the statement said. As per the Sri Lankan newspaper, The Sunday Daily Neither India nor the US had given sufficiently “concrete reasons” for opposing the docking of the Chinese ship so the government granted its approval. The message suggests that the Indian authorities were not able to persuade Sri Lankans about the alleged nature of the spy ship. But all was not lost for India as the scheduled visit is accompanied by various safeguards. The Sri Lankan had made it clear that the crew of the vessel cannot be rotated or replaced. The shape has to Switch ‘ON’ the Automatic Identification System (AIS) of the vessel while in the Exclusive Economic Zone of Sri Lanka and the vessel cannot undertake any Scientific explorations when on the high seas. The press brief also highlighted the importance of both India and China in the Sri Lankan foreign policy objectives. The press note ends with “The Ministry wishes to reiterate Sri Lanka’s policy of cooperation and friendship with all countries. Security and cooperation in the neighborhood are of utmost priority. Sri Lanka intends to safeguard the legitimate interests of all countries, in keeping with its international obligations. The Ministry is deeply appreciative of the support, solidarity, and understanding of all countries, especially in the current juncture when the country is in the process of addressing severe economic challenges and engaging in multiple domestic processes to ensure the welfare of the Sri Lankan people”.

The Chinese side welcomed the clearance granted to the vessel by the Sri Lankan counterparts. The spokesperson of the Ministry of Foreign Affairs of the Peoples’ Republic of China Wang Wenbin said, “We urge the relevant parties to see China’s marine scientific research activities in a rational light and stop disrupting normal exchange and cooperation between China and Sri Lanka.”

As far as India’s response is concerned on the clearance of the Yuang Wang 5 to dock at the Hambantota, it is consistent that it cannot compromise with its core national security concerns. It has reiterated its earlier position to keep the waters of the Indian ocean away from any Geopolitical contest. The spokesperson of the MEA Arindam Bagchi in its weekly press briefing on 12 August pointed to the Indian stand. He mentioned ” We will make the best judgment in our interest. This naturally takes into account the prevailing situation in the region, especially in our border areas. And insofar as in the context of India and China, we have consistently maintained the necessity of mutual respect, mutual sensitivity, and mutual interest as the basis of the development of ties. “

A way for the Indian Approach

The time has come that the Political Elites and the Foreign policy establishment in the South Block to take the stock of India’s current approach in the Region and devise its future actions accordingly. There is a need for India to be sober and humanistic in its future course of action. It does not have the luxury to alienate Sri Lanka for the sake of rivalry with China. Sri Lanka has an intrinsic relationship with India politically, culturally, and economically.

In this direction, the recent Gift of Dornier Reconnaissance Aircraft to the Armed forces of Sri Lanka is a step in the right direction and praiseworthy. It will certainly augment the abilities of Sri Lankan forces to counter human and drug trafficking, smuggling, and other organized forms of crime in its coastal waters more effectively. Induction of the aircraft is timely given the current challenges to Sri Lanka’s maritime security. This is in line with Prime Minister Narendra Modi’s conception of maritime security in the region named SAGAR i.e., Security and Growth for All in the Region.

Former Naval Chief of India Arun Prakash in his opinion piece ” Step Back from Water’s edge” published in The Indian Express dated 10 August 2022 called for India’s response to the Chinese military vessels in the Indian Ocean to be more calibrated. According to him ” India must face the reality that with its 350-warship strong (and growing) battle force having overtaken the US Navy, China has achieved its ambition of becoming a maritime great power”. He argued for India to bolster its economic and maritime power and devised its own ‘Monroe Doctrine.

Finally, India should approach China in a Holistic Manner rather than a piecemeal approach. It does not have the liberty to approach her with a knee-jerk reaction and with a reckless attitude like the United States. The current crisis has demonstrated that this is not the first crisis in the Indian ocean, nor is it going to be the Last. So, India needs to pull up its socks and be ready to play a long game with the Chinese in the region.