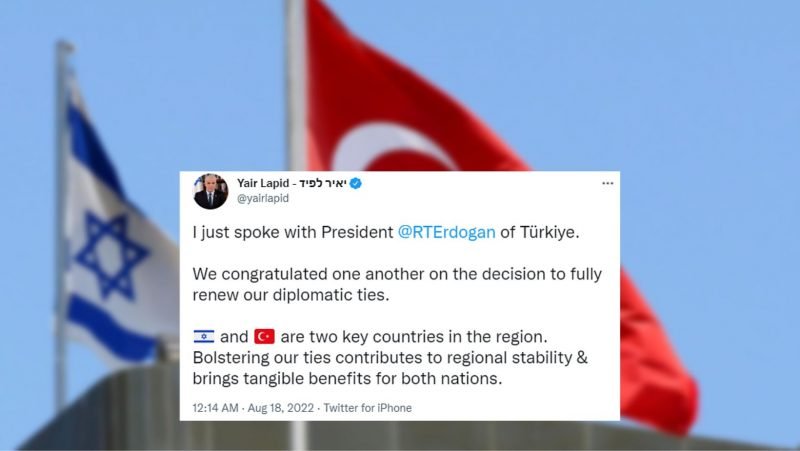 Israel’s Prime Minister Yair Lapid on Wednesday announced the restoration of full diplomatic ties with Turkey. The announcement follows after years of strained relations between the two Mediterranean nations.

The two regional powers had expelled ambassadors in 2018 over the killing of 60 Palestinians by Israeli forces during protests on the Gaza border against the opening of the U.S. Embassy in Jerusalem.

But they have been working to mend long-strained ties with energy emerging as a key area for potential cooperation.

A visit to Turkey by Israeli President Isaac Herzog in March, followed by visits by both foreign ministers, helped warm relations after more than a decade of tensions.

Erdogan and Lapid held a phone call on Wednesday, both countries said, and expressed their satisfaction with the progress in relations and congratulated each other on the decision to appoint ambassadors.

The move, which comes as Israel has sought to improve ties with regional powers, was agreed upon two years after the so-called Abraham Accords which saw relations normalised between Israel, Bahrain, the United Arab Emirates and Morocco.

Turkey also launched a charm offensive in 2020 to repair ties with estranged rivals, making overtures to Egypt, the UAE, Israel and Saudi Arabia. Efforts with Cairo have so far yielded little progress, but officials have said normalisation work with Riyadh and Abu Dhabi are going well.