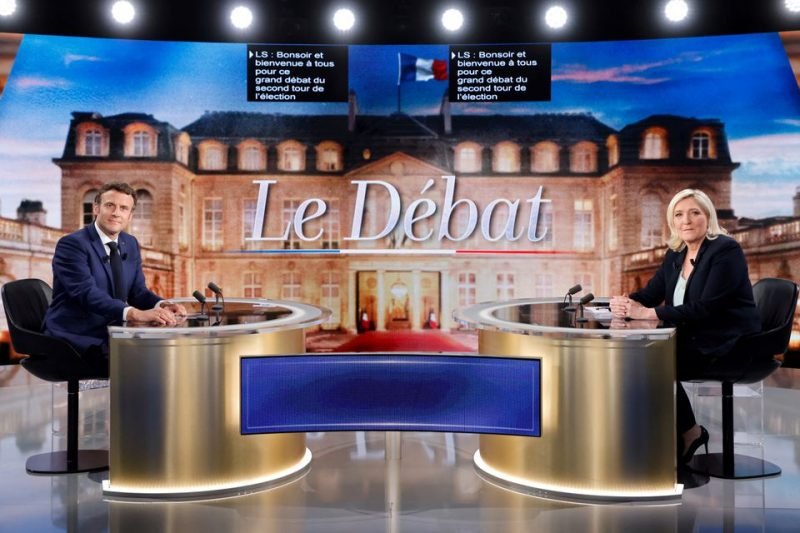 French President Emmanuel Macron on Wednesday accused his far-right rival Marine Le Pen of being in thrall to Russian President Vladimir Putin over a years-old Russian bank loan to her party during a fiery TV debate ahead of Sunday’s election.

While he also charged Le Pen with harbouring an undiminished desire to pull France out of the European Union (EU), she struck back with a pledge to put money back in the pockets of millions of French made poorer during his five-year presidency.

The debate – their only one of the campaign – was peppered with appeals of “don’t interrupt me” and accusations the other was not up to the job of leading France, a veto-wielding U.N. Security Council member and Europe’s second-largest economy.

“Stop mixing everything up,” a combative Macron told Le Pen during one heated exchange about France’s debt, which like others has swollen due to pandemic support measures.

“Don’t lecture me,” responded Le Pen, who avoided the pitfalls of a previous encounter in 2017, when her presidential bid unravelled as she mixed up her notes and lost her footing.

For Le Pen, who lags Macron in voter surveys by as much as 56-44, the debate was a chance to persuade voters she has the stature to be president and that they should not fear seeing the far-right in power.

A snap poll conducted for the BFM TV channel showed that 59% of respondents found Macron the more convincing of the two, however it was not clear how that would translate into voting intentions on Sunday.

Macron’s strongest lines of attack were on a loan to her party for its 2017 campaign contracted through a Russian bank.

“A lot of your choices can be explained by this dependence,” he said in an attack on Le Pen’s policy positions which he said still included a “project which dare not speak its name” to withdraw France from the 27-member EU.

Le Pen, who has toned down her once staunchly anti-EU rhetoric as part of a bid to broaden her electoral appeal, dismissed both the charge of wanting to leave the EU and of being compromised politically by the Russian bank loan.

“I am a completely free and independent woman,” she said.

With unemployment at a 13-year low, Macron said he was proud of job creation during his term and added: “the best way to gain purchasing power is to fight unemployment.”

The two candidates kept accusing each other of failing to respond to voters’ real concerns, with Le Pen saying that “in real life” her proposals would improve voters’ situations much more than her opponent.

“I will make it my absolute priority over the next five years to give the French their money back,” Le Pen said, adding that the French had “suffered” throughout Macron’s mandate.

Much haggling went on behind the scenes ahead of the debate, from the temperature of the room to flipping a coin to decide which theme they would start with – the cost of living – to who would speak first – Le Pen.

With both candidates dismissing the other’s plans as unrealistic but not scoring any obvious knock-out blows, it may not be clear what impact the debate has on the electorate.

Only 14% of voters were waiting for the debate to decide who to vote for, while 12% said it would be decisive for whether they will vote at all, a poll by OpinionWay-Kea Partners for Les Echos newspaper showed.

That said, after more than half of the electorate voted for far-right or hard-left candidates in the first round on April 10, Macron’s lead in opinion polls is much narrower than five years ago, when he beat Le Pen with 66.1% of the vote.

Since then, Le Pen has at least partly succeeded in attracting mainstream voters while Macron is no longer the same disruptor from outside politics that he was in the 2017 debate, which at the time cemented his status as the clear front-runner.