Afghan girls head back to school as Taliban end ban 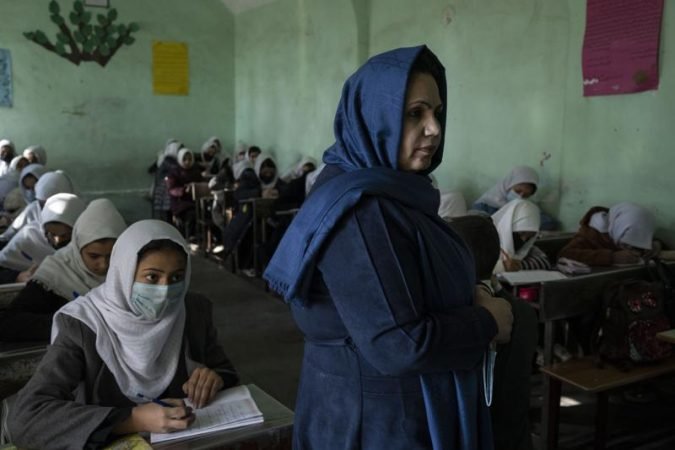 Groups of girls headed back to class in the Afghan capital Wednesday after Taliban authorities announced the reopening of secondary schools, more than seven months after seizing power and imposing harsh restrictions on the rights of women to be educated.

All schools were closed because of the Covid-19 pandemic when the Taliban took over last August — but only boys and some younger girls were allowed to resume classes two months later.

The international community has made the right to education for all a sticking point in negotiations over aid and recognition of the new regime, with several nations and organisations offering to pay teachers.

The education ministry said schools would reopen Wednesday across several provinces — including the capital Kabul — but those in the southern region of Kandahar, the Taliban’s spiritual heartland, will not open until next month. No reason was given.

Hundreds had arrived by 7:00 am (0230 GMT) at Zarghona High School, one of the largest in the capital, according to an AFP reporter.

At Rabia Balkhi School, also in the capital, dozens of girls had gathered at the gate waiting to be let in.

Schools in other provinces such as Herat and Panjshir were still to open.

The ministry said reopening the schools was always a government objective and the Taliban were not bowing to pressure.

“We are not reopening the schools to make the international community happy, nor are we doing it to gain recognition from the world,” said Aziz Ahmad Rayan, a ministry spokesman.

“We are doing it as part of our responsibility to provide education and other facilities to our students,” he told AFP.

The Taliban had insisted they wanted to ensure schools for girls aged 12 to 19 were segregated and would operate according to Islamic principles.

‘What will be our future?’

Some pupils said they couldn’t wait to get back — even if it meant covering up according to a strict Taliban dress code.

“We are behind in our studies already,” said Raihana Azizi, 17, as she prepared to attend class dressed in a black abaya, headscarf and veil over her face.

The Taliban have imposed a slew of restrictions on women, effectively banning them from many government jobs, policing what they wear and preventing them from travelling outside of their cities alone.

Despite the schools reopening, barriers to girls returning to education remain, with many families suspicious of the Taliban and reluctant to allow their daughters outside.

Others see little point in girls learning at all.

“Those girls who have finished their education have ended up sitting at home and their future is uncertain,” said Heela Haya, 20, from Kandahar, who has decided to quit school.

“What will be our future?”

It is common for Afghan pupils to miss chunks of the school year as a result of poverty or conflict, and some continue lessons well into their late teens or early twenties.

Human Rights Watch also questioned what motivation the girls would have to study.

“Why would you and your family make huge sacrifices for you to study if you can never have the career you dreamed of?” asked Sahar Fetrat, an assistant researcher with the group.

The education ministry acknowledged authorities faced a shortage of teachers — with many among the tens of thousands of people who fled the country as the Taliban swept to power.

“We need thousands of teachers and to solve this problem we are trying to hire new teachers on a temporary basis,” the spokesman said.