Ukrainian and Russian: how similar are the two languages? 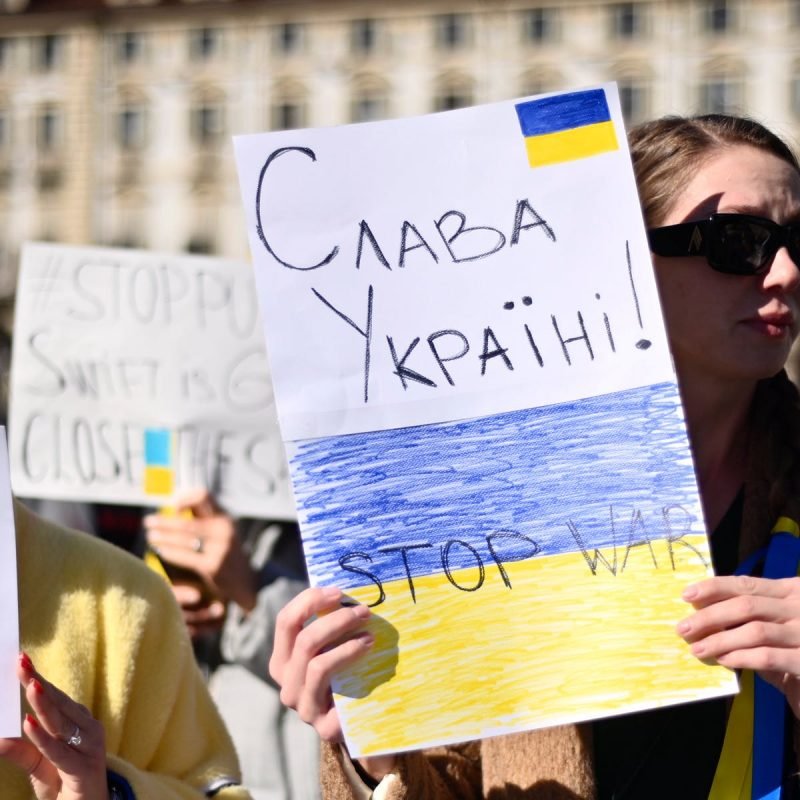 Vladimir Putin has written about the “historical unity” of the Ukrainian and Russian peoples, in part through their language. In Ukraine, these statements are refuted by evidence of Ukrainian’s long history as a separate nation and language.

As Putin continues his assault on Ukraine, the differences between these two languages have become part of the public discourse in the west – see the disparate spellings of Ukraine’s capital city, for example (Kiev being the Russian transliteration, Kyiv the Ukrainian).

Most people assume that being “separate” languages means some sort of complete and clear division between them, but the reality is more complex than that.

Ukrainian and Russian are both part of the Slavonic (or Slavic) language family. This group of related languages in central and eastern Europe also includes Polish, Czech and Bulgarian. A thousand years ago, the language spoken across Russian and Ukrainian territories would have been similar, like different dialects of the same language. Over time, under different historical influences, divergences appeared.

Ukraine became the eastern part of the Polish-Lithuanian commonwealth, absorbing significant amounts of Polish into its language. Moscow united the cities of the north and east into an independent state, eventually called Russia. So its language was shaped by contact with and immigration from areas to the east and the importation of foreign technical and cultural terms from western European countries like France, Germany and the Netherlands.

By the time Russia gained control of Ukraine in the 18th century, speakers in Russia and Ukraine were no longer as closely connected. Large shifts had emerged both in the languages’ vocabularies, as well as in the sounds and grammar.

As Russian and Ukrainian diverged from each other relatively recently (less than a millennium ago), they still share a lot of basic and core vocabulary – but not enough to be considered dialects of a single language.

One frequently cited figure is that Ukrainian and Russian share about 62% of their vocabulary. This is about the same amount of shared vocabulary that English has with Dutch, according to the same calculations. If you expand your sample by scraping internet data to compare a broader range of words than just those 200 ancient “core” words, the proportion of shared words declines. One computational model suggests that Russian and Ukrainian share about 55% of their vocabulary.

Using that higher figure of 62%, though, a Russian with no knowledge of Ukrainian (or vice versa) would understand roughly five in eight words. To understand this, have a friend cross out three out of every eight words in a newspaper and see how much of the text you can follow.

Russian and Ukrainian emerged from the same ancestor language, and, in the grand scheme of things, not very long ago. It is easier for a Russian to learn Ukrainian (or vice versa) than it is for an English speaker trying to master either of those languages. Their shared vocabulary and the fact that even words that have different meanings may look familiar makes it easier for Russian or Ukrainian speakers to “tune into” the other.

The long history of Russia as the dominant political and cultural language of the Soviet Union means that many of Ukraine’s citizens -– around 30% by the last census –- are native speakers of Russian, and many more studied Russian to a high level. The reverse has not been true historically, though that is now changing. The languages are close enough and have coexisted long enough that they even have a hybrid called Surzhyk, which is in common use in many parts of Ukraine.

The similarities between the two shouldn’t blind us to their distinct existence as separate entities, nor to the political implications of assuming they are one language.

About 25 years ago, the name Kiev started disappearing from maps, to be replaced by Kyiv. The latter is simply the Ukrainian “version” of the name, spelt in the Latin alphabet instead of in Cyrillic. Two vowels in it have changed: in Russian, the first vowel -y- became -i- after the consonant k-, and in Ukrainian historical -e- and -o- became -i- before a final consonant. In historical terms, then, neither name is more “original” – each contains changes that crept in over time.

The English habit of using Kiev, Kharkov, Lvov comes from the era of the Russian Empire and the Soviet Union, when Russian was the dominant written language in Ukraine. After Ukraine became independent and asserted its own linguistic identity, the Ukrainian forms Kyiv, Kharkiv and Lviv came to the fore. A similar example is Mumbai and Kolkata, which, in deference to local norms, replace the colonial names of Indian cities Bombay and Calcutta. This change is now coming to a supermarket near you – goodbye, chicken kiev –- hello, chicken kyiv.

The differences between Russian and Ukrainian amount to much more than what Putin dismissed in 2021 as “regional language peculiarities”. By looking for “unity” in language between Russia and Ukraine, he was marshalling an argument that allowed Russia the right to intervene in what he asserted to be Russian space.

This article has been originally published by The Conversation

Neil Bermel is a Professor of Russian and Slavonic Studies, University of Sheffield