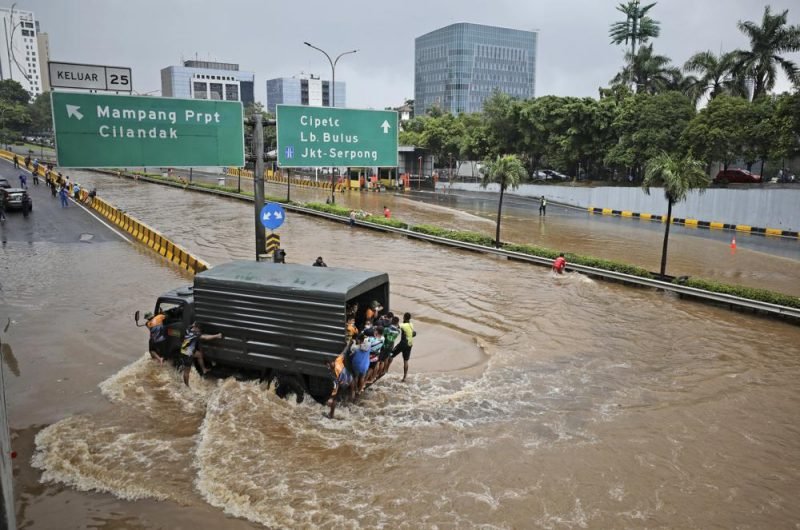 The walls of Saifullah’s home in northern Jakarta are lined like tree rings, marking how high the floodwaters have reached each year — some more than 4 feet from the damp dirt floor.

When the water gets too high, Saifullah, who like many Indonesians only uses one name, sends his family to stay with friends. He guards the house until the water can be drained using a makeshift pump. If the pump stops working, he uses a bucket or just waits until the water recedes.

As the world’s most rapidly sinking major city, Jakarta demonstrates how climate change is making more places uninhabitable. With an estimated one-third of the city expected to be submerged in the coming decades – in part because of the rising Java Sea – the Indonesian government is planning to move its capital some 1,240 miles (2,000 kilometers) northeast to the island of Borneo, relocating as many as 1.5 million civil servants.

It’s a huge undertaking and part of the mass movement of people that is expected to accelerate in the years ahead.

A staggering 143 million people will likely be uprooted over the next 30 years by rising seas, drought, searing temperatures and other climate catastrophes, according to an Intergovernmental Panel on Climate Change report published Monday by the United Nations.

In Asia, governments are already scrambling to deal with it.

One in three migrants in the world today comes from Asia, which leads the world in the number of people being displaced by extreme weather, largely storms and flooding, according to the report. With rural villages emptying out and megacities like Jakarta at risk, scientists predict migration flows and the need for planned relocations will only grow.

“Under all global warming levels, some regions that are presently densely populated will become unsafe or uninhabitable,” the report said.

By one estimate, as many as 40 million people in South Asia may be forced to move over the next 30 years because of a lack of water, crop failure, storm surges and other disasters.

“There are relatively few places on Earth that are simply too hot to live now,” he said. “But it’s beginning to look like in Asia, there may be more of those in the future and we need to think really hard about the implications of that.”

No nation offers asylum or other legal protections to people displaced specifically because of climate change, though the Biden administration has studied the idea.

People leave their homes for a variety of reasons including violence and poverty, but what’s happening in Bangladesh demonstrates the role climate change also plays, said Amali Tower, who founded the organization Climate Refugees.

Scientists predict as many as 2 million people in the low-lying country may be displaced by rising seas by 2050. Already, more than 2,000 migrants arrive at its capital of Dhaka every day, many fleeing coastal towns.

“You can see the actual movement of people. You can actually see the increasing disasters. It’s tangible,” Tower said.

The migration flows can be slowed if countries like the United States and European nations act now to drop their greenhouse gas emissions to zero, she said. Others say richer countries that produce more emissions should offer humanitarian visas to people from countries that are disproportionally impacted.

Dealing with climate migrants will become a major policy issue for Sub-Saharan Africa and Latin America as well over the next few decades, according to the U.N. report. Most people will be moving from rural areas to cities, especially in Asia where two-thirds of the population could be urban in 30 years.

The migration doesn’t have to cause a crisis, said Vittoria Zanuso, executive director of the Mayors Migration Council, a global group of city leaders.

In the northern part of Bangladesh’s capital, Dhaka, for example, officials are building shelters for climate migrants and improving the water supply. They also are working with smaller cities to be designated “climate havens” that welcome migrants, Zanuso said.

The influx of a new work force offers smaller cities an opportunity for economic growth, she said. And it prevents migrants who may be fleeing villages threatened by rising seas from seeking refuge in a city with scarce water supplies and basically “swapping one climate risk for another.”

In coming years, she said helping prepare cities for the influx of migrants will be key: “They are on the frontlines.”