US imposes tough sanctions on Russia, but avoids some severe steps 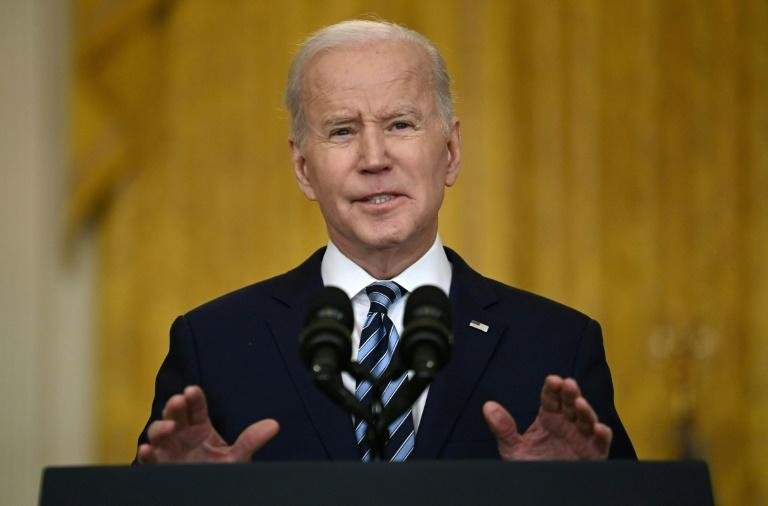 The harsh sanctions the United States imposed on Russia Thursday cast a wide net and seek to cripple its financial and technology sectors, as well as punish the country’s elites.

But Washington and its allies stopped short of enacting even tougher measures to punish Moscow for its invasion of Ukraine.

The fresh sanctions target Russia’s two largest banks, which will be cut off from US dollar transactions, while state energy giant Gazprom and other major companies will not be able to raise financing in Western markets.

In addition, the allies imposed export controls on high-tech items aimed at crippling Russia’ defense and aerospace sector, while Washington added more names to its list of sanctioned Russian oligarchs.

“This is going to impose severe cost on the Russian economy, both immediately and over time,” US President Joe Biden said in an address at the White House.

However, the penalties fell short of what some observers were expecting, including by failing to cut Russia off from SWIFT, the messaging system used to move money around the world.

That would have hindered the country’s ability to profit from the international energy market, which operates largely in US dollars.

“It is always an option but right now that’s not the position that the rest of Europe wishes to take,” Biden told reporters.

The banks targeted by the sanctions, Sberbank and VTB Bank, are Russia’s two largest and majority owned by the government, accounting for about half the banking system.

The US Treasury Department said it imposed “full blocking sanctions” on VTB, meaning all US-held assets “will be instantly frozen and inaccessible to the Kremlin.”

VTB is “one of the largest financial institutions Treasury has ever blocked” and the move “sends an unmistakable signal,” the department said.

Sberbank, which holds about a third of all bank assets in Russia, will be banned from conducting transactions through the US financial system.

Together with penalties against three other banks, the actions target “nearly 80 percent of all banking assets in Russia and will have a deep and long-lasting effect on the Russian economy and financial system,” Treasury said.

And the Commerce Department said the coordinated export controls impose a “denial on sensitive items Moscow relies on for its defense, aerospace and maritime industries.”

Washington also seized the assets of a new group of Russian oligarchs, and in a separate action took similar steps against 24 Belarusian individuals and organizations for their “support for, and facilitation of, the invasion” of Ukraine.

Andrew Lohsen of the Center for Strategic and International Studies praised that step, citing reports of attacks on Ukraine coming from its neighbor to the northwest.

That makes Belarus “unquestionably a party to this and therefore, they need to be met with a full measure of sanctions as well,” Lohsen told AFP.

While Lohnsen predicted the export controls will also be effective, if the United States and its European allies want to squeeze Moscow further, they may have to take steps like going after its oil and gas sector, even if that would drive up fuel prices at home.

Nonetheless, the initial coordinated response may have been “more of a sharp reaction than Putin was expecting” and will have “real implications for Russia’s long term growth,” Lohsen said.

Moscow took steps to shield its economy after it was hit with sanctions in 2014 when it invaded and annexed Crimea in southern Ukraine, including by stockpiling cash and gold.

Russia’s public debt amounts to just 18 percent of its GDP, far lower than most major economies, and it has foreign reserves of $643 billion as of the end of last week, according to official data.

“They have a piggy bank that can protect them, and support the economy even if they go into deficit,” she said.

IIF Executive Vice President Clay Lowery said Russia will feel the pain, and while some steps were omitted, there is room to escalate.

“The bottom line is that these sanctions will have a significant impact on Russia’s overall economy, and average Russians will feel the cost,” Lowery, a former senior Treasury official, said in a statement.