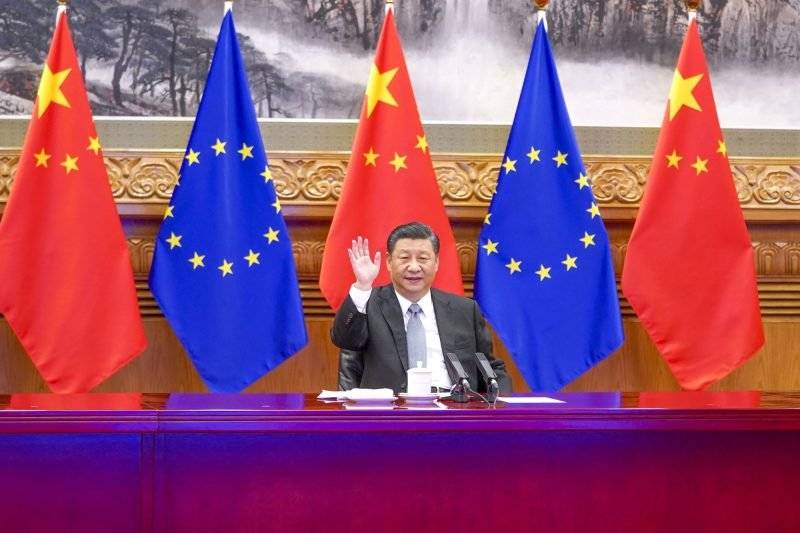 Trade relations from the past four decades between the European Union (EU) and China- the major geopolitical players have been facing concavity with the EU identifying Beijing as the systemic rival, because China has heavily invested in the technology-driven industrial sector, which can result in EU losing its technological edge,[1] and the non-adherence to global institutional order, the investors from the EU being the losers due to China’s trade policy. The economy of both the European Union (EU) and China have been driven because of trade and its related services; the former is dependent on industrial products, the latter is dependent on the service sector.[2]  EU and China are the largest partners of each other for imports and exports[3], from 2005 to 2015, the EU-China trade percentage rose from 10% to 15%,[4] hence looking at this significant share of percentage EU-China trade relations happened to be at the paramount. In account of this, from the past decade, the EU and China have been intending to furnish the investors of both countries to have market access for the long term; they have initiated negotiation over an agreement for the same. In light of this, the European Union in 2016 in the joint communication to the parliament accepted a new strategic element to deal with China, to develop reciprocity, fair competition, and cooperation to foster trade relations[5]. Bilateral relations between the EU and China were predominant in terms of trade, but this relationship has been witnessing more bitterness lately, and this article attempts to give an overview on the hitch within EU-China trade relation, while these events progress the question is, will the two successfully resolve the issues and will China hold on to the insistence of EU to follow international trade order?

China with its communist ideology and going forward with its expansionary policies and the tools to widen the road for the success of these policies poses a tough competition and challenge to Europe- its major trade ally; challenges and unfair competition have also been witnessed by Europe in the past China-United States trade relation as an example. The current situation of the pandemic that originated from China and the misleading information was given by China to the world is resulting in an assertive stance by the EU. COVID-19 has already devastatingly affected the people, and thus a negative public perception has been built towards China. These aspects play an important role for relations to build, for both the parties and in the case of EU- China it will be important to see developments in EU- China trade relations.

China being a nation with communist ideology, while the European union a liberal position, the ideologic difference becomes a hurdle to cross. To elaborate in this context, China in 2001 joined the World Trade Organization and attempted to implement the liberal trade models. But have failed to do so, and the issues like lack of transparency, government intervention that leads to the dominance of the state-owned firms, unequal access to subsidies, lack of protection and enforcement of the intellectual property rights, are not well addressed,[6] this becomes the main hurdle for the trade relations, as EU demands to address all of these aspects. These issues if not well addressed will keep the western investors at loss, as they won’t be able to gain their financial targets thereby losing their trade surplus that ultimately affects the economy.

The other factor related to trade imbalance is the export and import from the EU to China and vice versa, according to the EU trade monitoring statistical data, the percentage of exported and imported goods from China to the EU single market have differences vis-à-vis China trade monitoring data system. The shipped consignment coming from its country of origin is shipped to the EU via the borders of some nations in the European region and reaches the receiving country, the EU trade data monitors the route of the consignment, EU is also interested in the route of the consignment through which it has reached. This process is by the UN recommended process for international import-export. This leads to the discrepancy of data on trade, and leads to no uniformity in the distribution of the imported goods, ultimately leading to a trade deficit.[7]

China’s treatment to the people of Xinjiang provenance knowns as the Uyghurs were detained in camps and according to a testimonial, Chinese police tortured the innocents, this act of China irked EU referring it to issues related to Human Rights and in response to this EU imposed sanctions on China and its official representatives; this event is important to take a note of because the sanctions came into force immediately after China signed the Comprehensive Agreement on Investment[8], after the rounds of tough negotiations, so the attempt to smoothen the trade ties seem to drench. Another, topic on which both the partners have a difference of opinion is the Belt and Road Initiative- a project of strategic importance to the President of China Mr. Xi Jinping. This project aims to develop infrastructure, political communications, economic developments, and most of the countries signing the initiative, the concern to EU is China trying to institutionalize, and strengthen its presence within the 16+1 initiative member countries- (the ones who first came in support of the BRI initiative), this strategic move of China through BRI initiative can impinge on the unity and solidarity within the European Union countries, thereby decreasing EU’s influence in the region. [9]

The geopolitical factor that has its repucurrsions on EU-China trade is the US influence. Biden administration in the office, in his first press release hinted at its tougher approach towards China in continuation of policies by his predecessor, so tensions between the US and China are to stay for a while, and this will compel US allies in Europe to have conditioned policy choices vis-à-vis China. [10]

The issues related to trade and the process of trade according to the international order that China has cleverly left unaddressed, China’s ideological enforcement in the international order, and its deviation from reformistic view to becoming stable in its production of goods and services, its response to the issues of international concerns like the Human rights, impingement of its institutions, and also the stance of the United States towards China brings in skeptical views on the flattening of relations of China and the European Union. However, the other stage where these global partners could share their views is on that of the Climate Changes, but here again China and EU both have their different ways to achieve the targets of cutting down the reasons behind climate change effects the geographical parameters being one of the factors behind this. In all, if we look at the entire partnership there are no common grounds where the two could agree more on issues and arrive at a commonly acceptable solution mainly due to the ideological differences. Also, the current outbreak of the pandemic has brought negative perception within the people in the European region towards China. The all said reasons will surely impact the government’s decisions, policies towards China, and the concavity is here to stay and await a resolution on the issues and might make the EU find an alternative geopolitical partner in the Asian region.

While the above rationales give us the background of the issues within the EU-China trade partnership, we have to keep in mind that EU is the union of sovereign nations in the European region that govern the political scenarios to fullfil their national interests, and economy being the major factor as it helps in the back and forth of the financial capital. Nations like Germany, 16+1 nations, France, Italy do have their individual trade ties with China, and these nations seem to continue this partnership, thereby achieving their national interests while side-lining the supranational fidelity over the trade issues that lies between China and EU.

In the interconnected geopolitical arena, it is in the best interest to have firm, strategic policies in bilateral, multilateral relations. EU and China should both work on the trade relationship, and in the globalized world order it is important to adhere to the international system, failing to do so can lead to turbulent interconnections, and EU-China the allied powers interdependent could lose on their services, that will affect the trade relations.