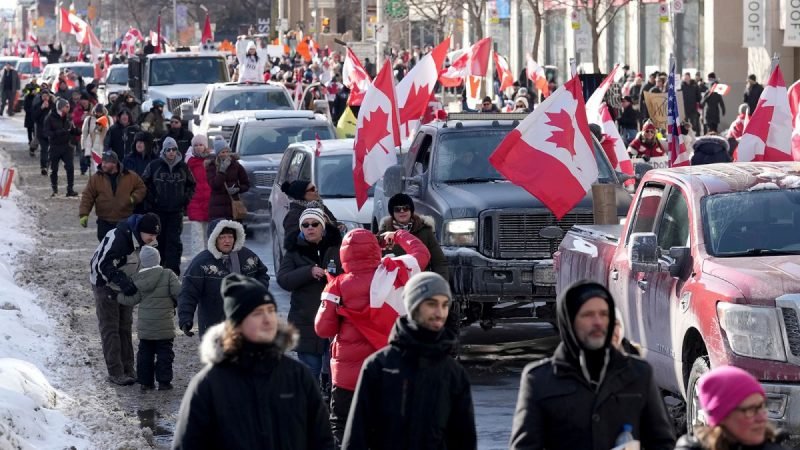 US and Canadian business groups on Tuesday demanded truckers protesting against Covid restrictions end their blockade of a vital trade route between the two countries.

The Ambassador Bridge connecting Ontario province and the US state of Michigan has been partially blocked to vehicle traffic since Monday by supporters of a trucker convoy occupying Ottawa to denounce vaccine mandates and other public health restrictions.

“Business associations on both sides of the border are calling for a swift and immediate clearing of the Windsor-Detroit Ambassador Bridge blockade and a timely re-opening of the bridge,” the groups said in a statement.

The suspension bridge is the busiest trade crossing in North America, with typically more than 40,000 commuters, tourists and truck drivers carrying US$323 million worth of goods crossing each day.

Another key trade link between Coutts, Alberta and Sweet Grass, Montana has also been clogged by protestors for several days.

“As our economies emerge from the impacts of the pandemic we cannot allow any group to undermine the cross-border trade that supports families on both sides of the border,” said the 60 business groups, which include the Detroit and Canadian chambers of commerce.

Earlier, Canadian Transport Minister Omar Alghabra warned that the border blockade, if it continues, “will have serious implications on our economy, on our supply chain.”

He said he’s heard from automakers and food distributors who are being impacted, telling reporters in Ottawa he hoped the demonstrators would stop the bridge blockade “because this is having a serious impact on people’s livelihoods.”

Ontario Premier Doug Ford tweeted that “many essential workers, including frontline health care workers, rely on it (the bridge) to get to work,” in reference to nurses who live in Canada but commute daily to US hospitals near the border.