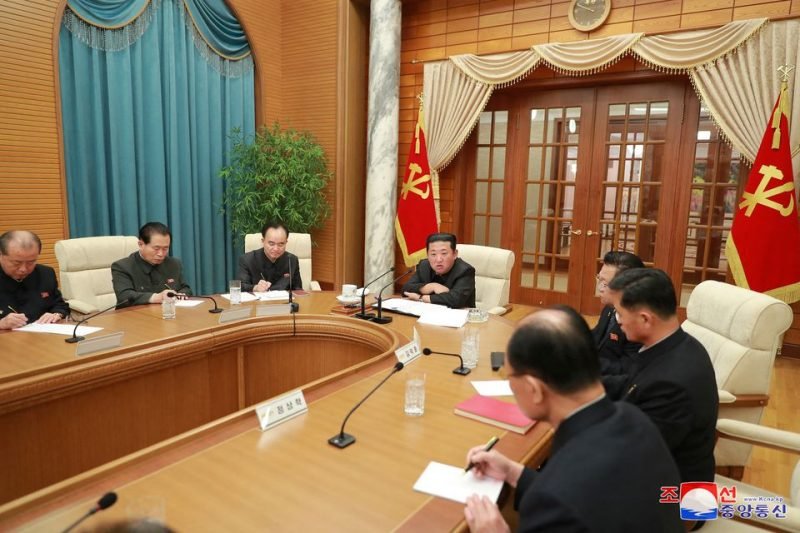 North Korea’s parliament pledged to develop the economy and improve people’s livelihoods in the face of a “persevering struggle” against international sanctions and the coronavirus pandemic, state media said on Tuesday.

The Supreme People’s Assembly (SPA), the reclusive state’s rubber-stamp parliament, gathered on Feb. 6-7 to discuss the budget and adopt laws on childcare and the protection of overseas residents, the official KCNA news agency said.

Leader Kim Jong Un did not attend the meeting, which was led by Choe Ryong Hae, his key aide who chairs the SPA standing committee.

The parliament rarely meets and usually serves to approve decisions on budget, personnel and legal issues, as well as the tasks of the ruling Workers’ Party, whose members mostly form the assembly.

The gathering came as North Korea faces mounting economic woes amid sanctions over its weapons programmes and COVID-19 lockdowns which sharply cut trade with China, its major ally and economic lifeline.

On Monday, the United States called on North Korea to defund its nuclear and ballistic missile programmes and prioritise the needs of its own people, as Russia and China blamed sanctions for worsening the humanitarian situation in the hermit Asian state.

In December, Kim lauded success made in implementing a five-year economic plan he unveiled early last year, but warned of a “great life-and-death struggle” this year to boost the economy and improve people’s lives.

Kim Tok Hun, premier of the cabinet overseeing the economy, told the SPA there were both achievements and “grave flaws” last year, KCNA said. He aimed to cement the foundations for the five-year plan this year, with metal and chemical industries key.

He vowed to bolster efforts to restore the “unitary trade system,” without elaborating.

Lim Eul-chul, a professor of North Korean studies at Kyungnam University in South Korea, said it could be meant to centralise trade channels and tighten state control in line with an amendment to trade law endorsed by the SPA last week.

The U.N. special rapporteur on human rights in North Korea has said the country’s most vulnerable people risk starvation amid deepening isolation during the pandemic.

North Korea has not confirmed any COVID-19 cases, but closed borders and imposed strict travel bans and other restrictions.

The economy suffered its biggest contraction in 23 years in 2020 due to sanctions, the pandemic and bad weather.

The border shutdown led to a 80% drop in two-way shipments in 2020 with China, which had accounted for some 90% of North Korea’s trade volumes. Both sides resumed trade last month, when a North Korean train arrived in a Chinese border town for the first time since the pandemic.

At the SPA, Finance Minister Ko Jong Bom mapped out this year’s budget, including a 33.3% hike in spending to tackle the pandemic, KCNA said in another dispatch.

It did not specify the scale of the budget, but said 15.9% of the total would be allotted to defence, similar to last year.

“Defensive budget planning appears to continue since last year due to the pandemic,” an official at Seoul’s Unification Ministry in charge of cross-border affairs told reporters.

There was no mention of foreign policy or inter-Korean relations, unlike last September when Kim Jong Un hosted the SPA and offered to reopen hotlines with the South while criticising U.S. “hostile policy.”