One year of Myanmar coup: The balancing act of Indian foreign policy 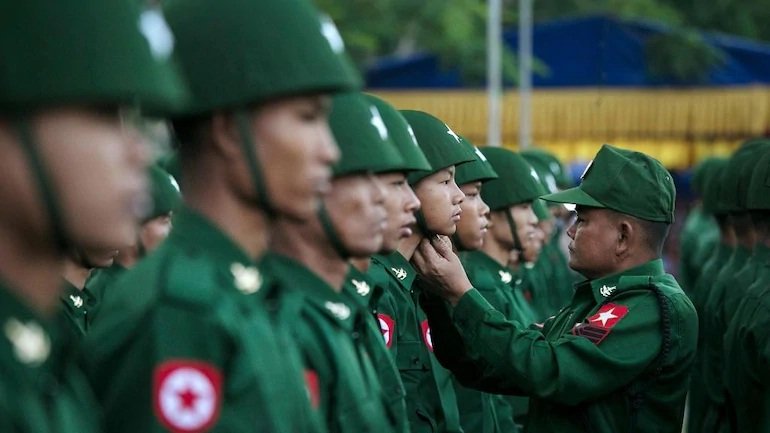 Last year on 1st February Myanmar military under the leadership of senior general Min Aung Hlaing ousted the government of Aung San Suu Kyi in a coup just a day before the commencement of the new parliament session. In the last one year, acc. to Assistance Association for Political Prisoners (AAPP) more than 1100 protestors have lost their lives while protesting against the junta government of Tatmadaw (local name of the military in Myanmar). A few days back when the junta government warned the civilians to not mark the first anniversary of the coup, the protestor came out in large numbers defying junta orders and did participate in peaceful protest against the coup.

Myanmar has a long history of military rule in the country. It was the third time since independence that the military has taken over the government first two being in 1962 and 1988. Many stated this as the end of Myanmar’s ten-year journey to democracy. It was also visible since the demonstrations were also the largest since the 2007 uprising against the military.

The reason military forwarded for the overtaking of the government is not very convincing. They said there was fraud in the Nov 2020 election in which the NLD party led by Aung San Suu Kyi was victorious with over 80% of the votes. While there are reports that in some conflict areas people could not vote, there can be no doubt that the election results reflected the will of the people in the vast majority of the country. The NLD party led by Aung San Suu Kyi won 396 seats out of 476 seats it contested, whereas the army’s party, the Union Solidarity and Development Party (USDP) won only 33 seats in the Nov 2020 elections. Many strategists believe the reason why Tatmadaw decided to take over the power is that they were worried about the possibility of bringing reform in the constitution and taking away the power of the military that it enjoy in the parliament. According to the 2008 constitution of Myanmar, 25% of seats are reserved for the military in the parliament.

But to bring any constitutional amendments 75% majority is needed, which is almost not possible considering the military will not vote against itself. The Second argument that came to light for explaining why the military decided for the coup is of senior general Min Aung Hlaing’s greed to stay in power. As it is widely known that the Myanmar military is not just active in national politics but also plays an important role in the country’s economy too. The military created two huge conglomerates made up of local and foreign companies, Myanmar Economic Holdings (MEH), and Myanmar Economic Corporations (MEC). Many high-ranking officials and their family members have holdings in these businesses. That’s why to secure his position in the economic and political structure of the country Min Aung Hlaing opted coup as the option.

Myanmar is the only country from ASEAN which borders India. The 1643 kilometres border is mostly porous and used by the tribes living around to travel between India and Myanmar. India understands the importance of the Myanmar military to keep the insurgency under control in the northeastern states bordering Myanmar. Peace in Chin and Rakhine states of Myanmar is essential for the completion of the Kaladana Multi-Modal Transit Transport project and Trilateral Highway project connecting Moreh, Manipur to Mae Sot, Tak province of Thailand through Myanmar.

When India did not condemn the coup as other western countries did, New Delhi was aware of the fact that whether the civilian government rules Myanmar or military dictatorship, the military will always have the important say in the running of the country. New Delhi did not want to upset the Myanmar military. The Arakan Army (AA) on the Myanmar side and the National Socialist Council of Nagaland Isak- Muivah (NSCN (IM)), is operating from Myanmar soil against India in northeastern states. India recognizes the help of the Myanmar military in countering these insurgent groups. So when the problem of refugee influx in Mizoram and Manipur started, New Delhi was clear in its stand of not taking any refugees and deporting everyone. But, when Mizoram CM wrote a letter to PM Modi requesting him to revoke the order and establish the fund to help the refugees to stay. It created a dilemma for the Indian government as New Delhi did not want to send the signal as they are against the military govt.

Myanmar is an important element in the success of India’s “ Neighbourhood First”, “ Act East”, and “indo-pacific” policies. It was from Naypyidaw that P.M. Modi launched India’s Act East policy in 2014. So when news came out of the coup in Myanmar, India’s response was “deep concern”, which is considered moderate. India and Myanmar enjoy great and extensive diplomatic, political and military level relations in recent times. It was India’s understanding of the military’s role in Myanmar politics that last year there was a joint visit of foreign secretary Harsh Vardhan Shringala and Army Chief general Manoj Mukund Narvane on Oct 4-5, 2020.

India does not support the route of sanctions, as it believes they do not bring the desired result but hurt the poor population of the country. As Brahma Chellany wrote on 5 Feb 2020, “ don’t isolate Myanmar- Us president Joe Biden administration must not ignore how often

American sanctions against countries have worked to china’s advantage. In this light, the US must take a cautious and prudent approach on Myanmar”. This statement matches India’s concern too. New Delhi is already worried about the growing influence of China in Myanmar through its Road and Belt Initiative (BRI). In 2018 during xi Jinping’s visit to Myanmar, the China Myanmar Economic Corridor agreement was signed. The 1700 km corridor connects Kunming, China to Mandalay and then in the east to Yangon and in the west to Kyaukphyu, Myanmar. It was a very interesting development that after Xi Jinping visited Myanmar in January 2020 a few days after signing the 33 agreements (Kyaukpyuyu special economic zone and Kyaukphy deep sea-port) Tatmadaw decided to took over the power in the coup. It is believed that the Myanmar military got the pre-approval of China.

Stability in Myanmar is important for India. As more than 100 companies are operating in Myanmar with an investment of around $1.2 billion, according to the Indian embassy. As of March 2021, India was the 11th largest investor in Myanmar and most investments have been in the oil and gas sector. So when Adani ports decided to exit their investment from the country by June 2022, it was not good news for India. Adani port had a project under construction worth $290 million in Yangon international terminal project on the land leased from military-backed Myanmar Economic Corporations (MEC).

The road ahead for India is not very smooth considering the warming relations between the Myanmar army with the PRC. On one hand, India has to project its image of a democratic country by not supporting military dictatorship, while on the other hand, India has to look for its immediate and future interest in the region. It will be interesting to watch what would be India’s stance on the next BIMSTEC summit to be held in Sri Lanka. Whether the military leader of Myanmar senior general Min Aung Hlaing will be invited or not, considering NLD leader Aung San Suu Kyi is facing a trial that could lead her to 100 years of prison term. The balancing act of Indian foreign policy is going to be tough but India has always been in the field of practising ‘walking the thin line’ kind of diplomacy.