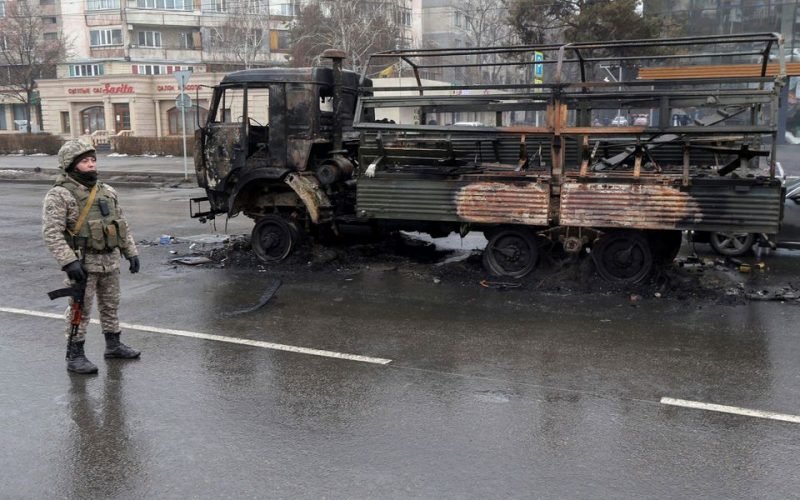 The sacked officials were deputies to former intelligence chief Karim Massimov, who was arrested on suspicion of treason after violent protests swept the oil- and uranium-producing Central Asian republic that borders Russia and China.

Thousands of people have been detained and public buildings torched during mass anti-government protests in the past week. President Kassym-Jomart Tokayev issued shoot-to-kill orders to end unrest he has blamed on bandits and terrorists.

Russian and state media reported 164 people were killed during the clashes, citing a government social media post. But health and police authorities did not confirm the figure, and the social media post was then deleted.

The internet has been restricted and telecoms patchy, making it difficult to check figures and confirm statements.

No single group has emerged to speak for the protesters. Demonstrations against a fuel price rise began a week ago before erupting into a wider protest against Tokayev’s government and the man he replaced as veteran president, 81-year-old Nursultan Nazarbayev.

At Tokayev’s invitation, a Russia-led alliance of ex-Soviet states – the Collective Security Treaty Organisation (CSTO) – sent troops to restore order, an intervention that comes at a time of high tension in Russia-U.S. relations ahead of talks this week on the Ukraine crisis.

Tokayev’s spokesman said on Sunday he thought the forces would not be in Kazakhstan for long, and possibly no more than a week or even less.

Russian President Vladimir Putin and other leaders of CSTO countries will hold a video conference on Monday to discuss the crisis in Kazakhstan, the Kremlin said.

The violence has spurred speculation of a rift in the ruling elite, with Tokayev fighting to consolidate his authority after firing key officials and removing Nazarbayev from a powerful role as head of the Security Council.

The president’s website announced the sackings of Marat Osipov and Daulet Ergozhin as deputy heads of the National Security Committee. It gave no explanation in a terse statement late on Sunday.

Their arrested former boss, Massimov, a two-time prime minister, was seen as close to Nazarbayev. Authorities have not disclosed any details of the allegations against him. He and his lawyer could not be reached for comment.

In a statement meant to quash talk of a rift, Nazarbayev’s spokesman said Nazarbayev had been in the capital Nur-Sultan throughout the crisis and chose himself to give up his security council post to Tokayev to help ease the crisis.

“(He) and the head of state have always been ‘on the same side of the barricades’… In these difficult days they have demonstrated the monolithic nature of state power for all of us,” the statement said, calling for people to rally around Tokayev.

Former Prime Minister Akezhan Kazhegeldin told Reuters that Tokayev needed to dispel doubts about who was really in charge.

“I think a lot of people in social networks, critics, continue to say he’s a nominee of Nazarbayev, that Nazarbayev is standing behind his back and manipulating him,” he said.

“Now he has complete formal executive power, the question is how he will deploy it. He needs to take command.”

Tokayev is likely to name new government members when he addresses parliament on Tuesday, his spokesman said.

He awarded prizes for bravery to 16 police and army officers killed in the violence.

“The situation has been stabilised in all regions of the country,” the presidential office said, adding law enforcement agencies had seized back control of administrative buildings.

“The counter-terrorist operation … will be continued until the complete elimination of the terrorists,” Deputy Defence Minister Sultan Gamaletdinov said.

The violence has dealt a blow to Kazakhstan’s image as a tightly controlled and stable country, which it has used to attract hundreds of billions of dollars of Western investment in its oil and minerals industries.

Police said 6,044 people had been arrested in connection with the unrest.

Russian paratrooper commander Andrey Serdyukov said the CSTO force had finished deploying to Kazakhstan and would remain there until the situation stabilised completely.

“A number of strategic facilities have been transferred under the protection of the united peacekeeping contingent of the CSTO member states,” the presidential office said.

Serdyukov said the troops were guarding important military, state and socially-important sites in the city of Almaty and nearby areas. He did not identify the facilities.

The deployments signal resolute Kremlin backing for the Kazakh authorities in a region Moscow sees as vital to its security along its southern flank.

U.S. Secretary of State Antony Blinken said Washington was seeking answers from Kazakhstan as to why it needed to call in Russian-led forces to resolve domestic unrest. He also denounced the government’s shoot-to-kill order.

In Almaty, the biggest city where much of the violence was concentrated, normal life appeared to be returning on Sunday.

Security forces have set up checkpoints around the city. Smashed windows, gutted cash machines and torched buildings bore witness to the destruction.

Reuters saw two military vehicles with mounted machine guns driving towards the square. Most of dozens of civilian and police cars torched during the unrest had been removed.

Supermarket chain Magnum said 15 of its 68 stores in Almaty had been looted.

A shopping mall’s staff told Reuters that video cameras showed looters attacking an ATM, changing into stolen clothes at the stores and walking out wearing two or three coats.

Yerkin Zhumabekov, a mall manager, said: “They arrived in cars with no number plates at night, they destroyed everything. They took everything they could, shoes, clothes, cosmetics.”