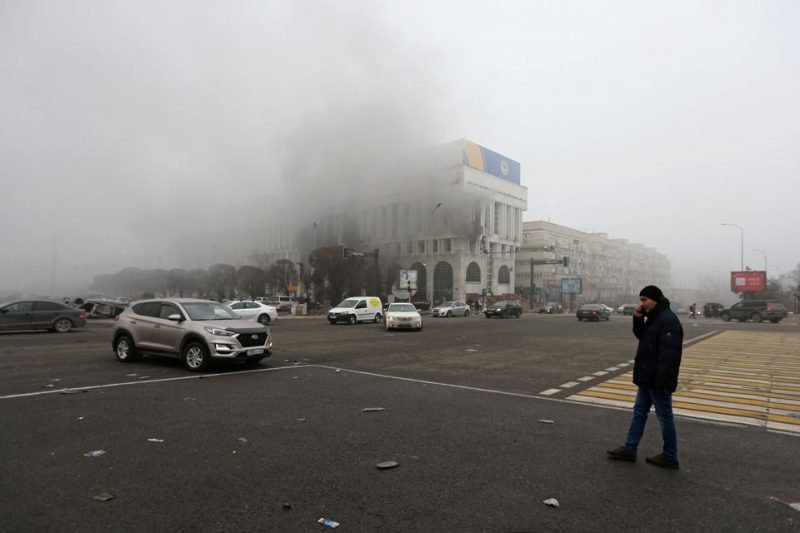 A man stands near the building of the Kazakhstan state TV channel, which was torched during protests triggered by fuel price increase in Almaty, Kazakhstan January 6, 2022. REUTERS
PDF Button

Kazakh President Kassym-Jomart Tokayev said on Friday that constitutional order had mostly been restored in the Central Asian country hit by unrest this week, his office quoted him as saying in a statement.

The Kazakh interior ministry said in a separate statement that 26 “armed criminals” had been “liquidated” and more than 3,000 of them detained, while 18 police and national guard servicemen had been killed since the start of the protests.

“An anti-terrorist operation has been launched. The forces of law and order are working hard. Constitutional order has largely been restored in all regions of the country,” Tokayev said.

“Local authorities are in control of the situation. But terrorists are still using weapons and damaging the property of citizens. Therefore, counter-terrorist actions should be continued until the militants are completely eliminated,” he added.

On Friday morning, Reuters correspondents saw armoured personal carriers and military servicemen in the main square of Almaty, Kazakhstan’s largest city, where soldiers fired at protesters a day before.

In another part of the city they saw a ransacked store which used to sell ammunition. The correspondents also saw military vehicles and about 100 people in military uniforms at another square in Almaty.

A peacekeeping force of the Moscow-led military alliance of ex-Soviet states, called in by Tokayev this week, is currently arriving to Kazakhstan but is not engaged in combat or in the “elimination of militants,” Tokayev’s administration said.

The overall peacekeeping force of the CSTO will number about 2,500 and will stay in Kazakhstan for a few days or weeks, the RIA news agency quoted the general secretary of the alliance on Thursday.

The violence has been unprecedented in a state ruled firmly since Soviet times by leader Nursultan Nazarbayev, 81, who had held on to the reins despite stepping down three years ago as president.

The uprising, which began as protests against a New Year’s Day fuel price hike, swelled on Wednesday, when protesters chanting slogans against Nazarbayev stormed and torched public buildings in Almaty and other cities. Protesters accused Nazarbayev’s family and allies of amassing vast wealth while the nation of 19 million remained poor.

The unrest has seen the internet and banks mostly shut down across the country.

The identity of the detained militants is being established, and the possibility of them belonging to an extremist organisation is being investigated, Tokayev’s administration said on Friday.

Tokayev will address the nation on Friday, his administration said, asking people in Almaty to limit their travelling around the city while the “search for the remaining hiding bandits is underway.”