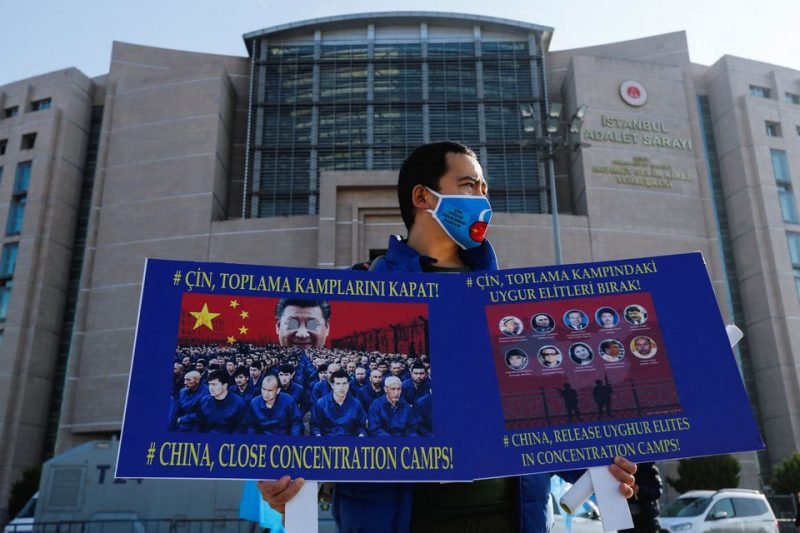 An ethnic Uyghur man takes part in a protest against China, in front of the Caglayan Courthouse, in Istanbul, Turkey, January 4, 2022. REUTERS
PDF Button

Nineteen people from China’s Uyghur Muslim ethnic group filed a criminal complaint with a Turkish prosecutor on Tuesday against Chinese officials, accusing them of committing genocide, torture, rape and crimes against humanity.

Lawyer Gulden Sonmez said it was necessary because international bodies had not acted against Chinese authorities, who have been accused of facilitating forced labour by detaining around a million Uyghurs and other primarily Muslim minorities in camps since 2016.

China initially denied the camps existed, but has since said they are vocational centres and are designed to combat extremism. It denies all accusations of abuse.

About 50,000 Uyghurs – with whom Turks share ethnic, religious and linguistic connections – are believed to reside in Turkey, the largest Uyghur diaspora outside Central Asia.

The complaint was filed with the Istanbul Chief Prosecutor’s Office.

China’s embassy in Turkey and the prosecutor’s office did not immediately respond to requests for comment.

“The international criminal court should have already started this trial, but China is a member of the (United Nations) Security Council and it does not seem possible within this dynamic,” Sonmez said outside the city’s main courthouse.

Surrounding the lawyer were more than 50 people holding photos of missing family members and signs calling for the prosecution of Chinese officials. Some waved the blue-and-white flags of the independence movement of East Turkestan, a group Beijing says threatens the stability of its far western region of Xinjiang.

The complaint relates to 116 people who the complainants say are still detained in China and was filed against 112 people, including members of the Chinese Communist Party, directors and officers at labour camps.

“Turkish legislation recognises universal jurisdiction. Torture, genocide, rape (and) crimes against humanity can be prosecuted in Turkish courts and criminals can be tried,” Sonmez said.

Medine Nazimi, one of those who filed the criminal complaint, said her sister had been taken away in 2017 and she had not been heard from since.

“My sister and I are Turkish citizens so I want my government to rescue my sister,” Nazimi said.

Some of the Uyghurs living in Turkey have criticised Ankara’s approach to China after the two nations agreed an extradition treaty. Turkey’s foreign minister said in March the deal was similar to those Ankara has with other states and denied it would lead to Uyghurs being sent back to China.

Some Turkish opposition leaders have accused the government of overlooking Uyghur rights in favour of other interests with China, which the government denies.

President Tayyip Erdogan told his Chinese counterpart Xi Jinping in July that it was important to Turkey that Uyghur Muslims lived in peace as “equal citizens of China”, but said Turkey respected China’s national sovereignty.

U.N. experts and rights groups estimate more than a million people, mainly from the Uyghur and other Muslim minorities, have been detained in recent years in camps in Xinjiang.Writing by Ali Kucukgocmen; Editing by Jonathan Spicer and Alex Richardson