The 5th Indian Ocean Conference kicks off with the theme: Ecology, Economy, Epidemic 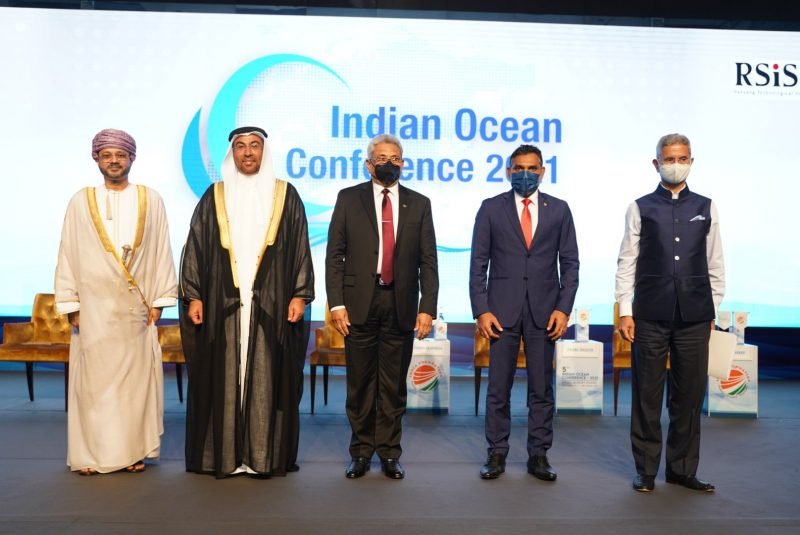 “For the world’s influential and mighty, the Indian Ocean and by extension Indo-Pacific is a strategy… but for us nations in the region, it is destiny” with this crucial remark by the Ram Madhav, 5th Indian Ocean Conference kicks off.

Organised by India Foundation in collaboration with RSIS Singapore, Institute of National Security Studies, Sri Lanka and Emirates Center for Strategic Studies and Research, UAE, this event is expected to host around 200 delegates and over 50 speakers from 30 countries.

Here are the key takeaways by the leaders and ministers of participating countries:

Minister Al Sayegh spoke about shifting global dynamics and fraying of the existing international world order as a potential threat to regional and global stability.

He called the topics of the theme, I,e. Ecology, Economy and Epidemic, intertwined and topical. He also highlighted the role of climate change as significant and drew parallels and links between climate change and other emerging issues relevant to the region such as mass migration, environmental degradation, food security and extreme weather change.

UAE Minister also acknowledged the responsibility that it will shoulder in steering an ambitious climate change and sustainability agenda. He also called on the regional partners for engaging heavily for the greater good of the region.

In the unprecedented time of the pandemic, Minister Al Sayegh lauded the efforts by the countries to stand together in the pandemic ensured UAE’s role in ensuring access to vaccines by the underdeveloped and developing countries around the globe.

He also appealed to countries to explore various facets of collaborations in order to minimise the socio-economic impact of the pandemic. He called on for the strong and long-standing ties between nations, ranging from trade tourism, investments to culture.

“Ultimately we recognize that mutual prosperity depends heavily on the strength of these ties. I’m confident that our partner countries will continue to promote deeper partnerships between one another and collaborate together in overcoming the challenges faced by us today”, he concluded.

Sri Lankan President, Gotabaya Rajapaksa too lauded the theme and called it critical to the development of the partner countries in the post-pandemic world. He said, “the theme deserves our utmost attention and deepest consideration”.

President Rajapaksa spoke about the efforts by the countries. He said, “In the continuing impact of COVID-19 on the world at large, first time in history, humanity had the sophistication and resources to actively identify, inhibit and even try and prevent the widespread devastation of the global epidemic before it was too late”.

He spoke about the role of the World Health Organisation and called its effort “able leadership”. Stressing on the cooperation between nations on the pandemic including sharing data and technical expertise, supporting capacity building in healthcare systems and financial assistance, he also hailed the efforts by the Sri Lankan government, local bodies and how the military demonstrated quick and responsive action in infrastructure development, contact tracing, and post-pandemic response through grants and rations.

He addressed the crucial impact of the Omicron variant and blamed the slow rollout of vaccines in some parts of the world for it. He also called for careful monitoring in the days and weeks to come.

President Gotabaya greatly appreciated the generosity of India, China, the United States and Japan for donating vaccines to Sri Lanka.

Speaking about the devastations caused by the pandemic, Sri Lankan President acknowledged the countless lives which came at a steep cost, he drew parallels with the rapid decline in economic activity and serious long-term consequences on global travel, trade and economic growth.

He said, “developing countries, in particular, have been very badly impacted from the loss of revenue from tourism, the loss of foreign exchange remittances from expatriate workers and the loss of export earnings have been especially devastating”.

He concluded his speech on a concerning note for the global action on limiting deforestation, curbing the use of fossil fuels, preventing over-exploitation of finite resources and increasing use of renewable energy as essential in the growth of the developing island nation. Furthermore, he appreciated the role of the Indian Navy and Russian naval vessels who along with the Sri Lankan navy for narrowly averting the crude oil spill at large, caused by X-Press Pearl, a Singapore-flagged cargo ship that caught fire and sank off Sri Lanka’s western coast in June 2020.

Prime Minister of Fiji, Frank Bainimarama joined the conference through a video telecast. He called the theme focused on the greatest challenges of our time and intricately woven together and called on participating countries to approach them holistically as one problem.

He started his address by appreciating India, he said, “India’s star rises in politics economics and trade technology and science it is a leader and like all good leaders it shows concern for its neighbour and his neighbourhood.

He spoke about the integration of ecology in every government activity, being an island nation. PM Bainimarama further stressed the impact of the pandemic, he said, “We were determined that economy and ecology would work together but now due to the pandemic we find that we must build an economy that has suffered huge losses.

Speaking about the recent COP26 summit, PM Bainimarama said, “Fiji pressed at cop 26 in Glasgow for a greater commitment to climate finance on the part of developed economies”. He said, “we need financing mechanisms that will disburse funds quickly and allow flexibility”.

Fijian Prime Minister concluded by highlighting the different prospects and challenges for economic recovery. He said, “we have different geographies and we have different prospects priorities and challenges for economic recovery but it’s clear we stand our best chance at a truly transformative and sustainable recovery by working together through sound economic policies and strategies through coordinated trade routes, improve access to health care and education, job creation and investment in green renewable and digital infrastructure”.

Maldivian Vice President started his address by highlighting the unprecedented global challenges due to the pandemic and the state of devastated economies.

He called this pandemic unimaginable and stressed how this pandemic has tested the Maldives. The contracting economy and reversing the years of hard-won gains are the biggest setback for the Maldives will haunt it for many years.

Vice President Naseem, spoke about tourism being the biggest contributor to Maldives’ GDP and how it took the hardest hit during the pandemic. As countries closed their borders and aeroplanes set on the tarmac. Empty restaurants, cafes and small businesses were among the most difficult factors in draining the Maldivian economies.

He lauded the robust vaccination drives and prompt actions by the Maldivian government, which enabled the country to re-open its beaches, resorts, restaurants and other tourist attractions which were incredibly contributing to the Maldivian economy.

Oman Foreign Minister, Sayyid Badr Albusaidi addressed the requirement of a well-coordinated, proactive and above all multilateral response. He said, “For Oman, the biggest component in the response to climate change is diversification of the economy and the Indian Ocean as a secure environment for free trade will facilitate innovation maximizes economic development and maximize diversification.”

He spoke about climate change in brief and highlighted the sufferings of the consequences of climate change and increasing scientific evidence affirming the need for urgent action.

Foreign Minister Albusaidi while speaking on the maritime economy and maritime security lashed out at Iran and accused it of politically motivated hijacking. He said, “I share my increasing concern about the potential escalation of regional tensions in the Indian ocean. Piracy may have receded and now politically motivated hijacking is the new phenomenon. Recently, these have come into the context of Iran and its relations with the region”.

Indian External Affairs Minister, S Jaishankar spoke about China’s rise and the changing American strategic posture to adjust itself in the multipolar world.

He highlighted the trend lines that have influenced the evolution of the Indian Ocean in recent years. He said, “First and foremost is the changing American strategic posture. Since 2008 we’ve witnessed greater caution in US power projection and an effort to correct its overextension”.

Adding about the United States, he said “the U.S. is moving towards greater realism both about itself and the world it is adjusting to multi-polarity and rebalancing and re-examining the balance between its domestic revival and commitments abroad this makes it a more active partner beyond orthodox constructs given how strong its influence is on the Indian Ocean”.

Another trend he highlighted is China’s rise. EAM Jaishankar added, “Even otherwise, the emergence of power at the global level is extraordinary happening. That it’s a different kind of polity enhances a sense of change. The USSR may have borne some similarities, but never had centrality to the global economy that China has today.”

He highlighted the consequences of china’s growth capabilities. He said, “China’s growing capabilities are particularly profound because of the extrapolation of its domestic seamlessness to the world outside”.

“As a result, whether it is connectivity technology or trade there is now an ongoing debate on the changed nature of power and influence separately”, he added.

Speaking of the artificial divides by the colonial powers, established by external interests, he said, “more than any other country India has been a victim of this phenomenon.

Dr Jaishankar also addressed SAGAR, India’s policy or doctrine of maritime cooperation in the Indian Ocean region. The policy was first announced by Prime Minister Narendra Modi on March 12, 2015. Speaking of it he said, “it bodes well in terms of exploring more collaborative endeavours in the coming times”.

His address included the post-COVID economic recovery, with a world of more decentralized. He focused to foster localization and promote regionalism.

He acknowledged a widespread disappointment about the lack of adequate progress on climate finance. He called on developing countries to not consent to the developed countries, shifting responsibilities onto them because they do not wish to change their lifestyle.

EAM spoke about a glaring vaccine divide whose implications were so obvious. “The needs of the global south have become much stronger in the last two years,” he added.

Vote of Thanks by Shaurya Doval

The inauguration session concluded with a vote of thanks by Shaurya Doval, board of governor at India Foundation. He thanked the co-organisers and government of the UAE, who helped us organize the conference.

Here’s the full video of the conference: