INS Vikrant (IAC-I): A Key Milestone for Make in India and its Significance for the Indian Navy 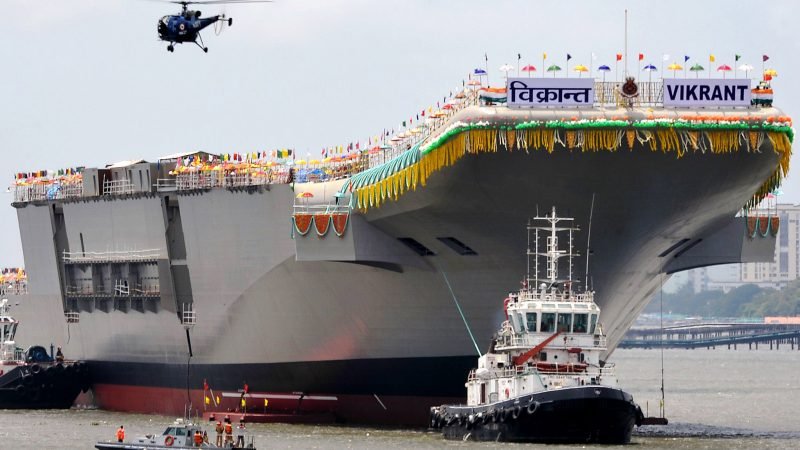 Following the construction of INS Vikrant, India became one of the few countries that have built an aircraft carrier mostly with indigenous technology. The Indian Navy’s Directorate of Naval Design is responsible for the design of the 44,000-tonne carrier, which was built at the state-owned Cochin Shipyard in Kochi, Kerala.

The initiative to build INS Vikrant, Project 71 Air Defense Ship (ADS) was started in the 1990s. It was actually to be delivered in 2014, which was delayed over a “decade” due to economic and technical issues. Admiral Arun Prakash, Chief of the Naval Staff, announced in August 2006 that the vessel’s classification has been changed from Air Defense Ship (ADS) to Indigenous Aircraft Carrier (IAC). The euphemism ADS was chosen throughout the planning stages to allay fears of a naval build-up. The carrier’s displacement was increased from 37,500 tonnes to nearly 40,000 tonnes after final design adjustments. The ship’s length was also raised from 252 metres (827 feet) to 262 metres (860 feet).

The INS Vikrant is not only a warship, the Navy calculates that about 80-85 percent of the project cost of approximately Rs 23,000 crore has been ploughed back into the Indian economy. According to the Indian Navy, more than 50 MSMEs and 2,000 People were directly associated with these projects. The most important of all this is that now we will not have to depend on Russia or any other western country as before. This will not only enhance India’s strategy but will also make India more technologically independent.

The IAC is the first-ever aircraft indigenously built carrier in the history of the Indian state. Almost 76 percent of its parts and machines were manufactured in India. The DMR 249 grade steel was developed in India by the Defence Metallurgical Research Laboratory (DMRL) and the Steel Authority of India Limited (SAIL). According to reports, the Bokaro Steel Plant in Jharkhand, the Bhilai Steel Plant in Chhattisgarh, and the Rourkela Steel Plant in Odisha produced 26,000 tonnes of three types of special steel for the hull, flight deck, and floor compartments. Larsen & Toubro’s Mumbai and Talegaon plants produced the main switchboard, steering gear, and watertight hatches; Kirloskar Group’s Pune plants produced high-capacity air conditioning and refrigeration systems; Best and Crompton supplied the majority of pumps; Bharat Heavy Electricals (BHEL) supplied the Integrated Platform Management System (IPMS), which is being installed by Avio, an Italian company; and Elecon E supplied the gearbox.

India is now moving away from being a defence importer to a defence manufacturer. In the year 2014, India’s defence export was roughly 2,000 crores. It increased to 17 thousand crores in 2019-20. The aim of the Defence Production and Export Policy 2020 is that by the year 2025, India will achieve defence production to the tune of 1.75 lakh crore and export more than 35 thousand crores worth of defence products. Just as India is currently considering giving state-ofthe-art weapons like the Tejas Light Combat Aircraft (LCA), BrahMos and Akash missiles to other like-minded countries. In this context, the Defence Ministry has worked fast on exporting Naval Patrol Vessel to Vietnam, Mauritius, Maldives and other Indo-Pacific countries, this will not only get foreign exchange for India, but it will also help India to balance its strategic rival China in the Indian Ocean.

Apart from all these things, this fact cannot be ignored that INS Vikrant came in real after many years from its initial proposed time. Its foundation was laid in 1999 under Project 71, which was to be completed in 2014.

Technically, the fact that IAC-1 is fully indigenous is wrong. The basic sensors and processing systems of the IAC-1 are imported, even the engines that accelerate this aircraft carrier are sourced from the American company GE Aviation, as well as the radars, naval guns to be installed on it are also imported from Israel and Italy.

The navy had earlier said that once commissioned, IAC-1 will be “the most potent sea-based asset”, which will operate the Russian-made MiG-29K fighter aircraft and Kamov-31 Early Warning Helicopters, both of which are already in use on the Vikramaditya. The new Vikrant will also fly the American aerospace and defence corporation Lockheed Martin’s MH-60R Seahawk multirole helicopter.

The flexing of Chinese naval strength has alarmed New Delhi. there is no question that Beijing views the IOR as a critical zone, second only to the western Pacific. After all, these seas carry 80 percent of China’s oil imports and 95 percent of its trade with West and South Asia, Africa, and Europe. It is also in this region where China clashes with both the United States and India. However, due to a lack of resources and a sluggish economy exacerbated by Covid-19, the acquisition of the intended 65,000-ton aircraft carrier Vishal is now in doubt, with Chief of Defence Staff General Bipin Rawat stating that the navy will have to choose between submarines and aircraft carriers. The navy has stated that three carriers are required so that at least two are available at all times — one for each of India’s seaboards.

For India’s external security, the Indian Navy needs to be constantly active in the Indian Ocean Region (IOR). However, comparatively, India spends much less than the Chinese and the quad countries spend on their respective navies. The Indian Navy’s budget is about 15% of India’s total defence Budget. On the other hand, China spends three times this amount. China has started registering its strategic presence in the Indian Ocean through the one road one belt initiative. In the coming time, the Indian Navy will have to face many challenges related to it, IAC-1 can prove to be the main weapon in dealing with these challenges.

The author is an Intern at Observer Research Foundation, New Delhi. He completed his master in International Relations from JNU, New Delhi