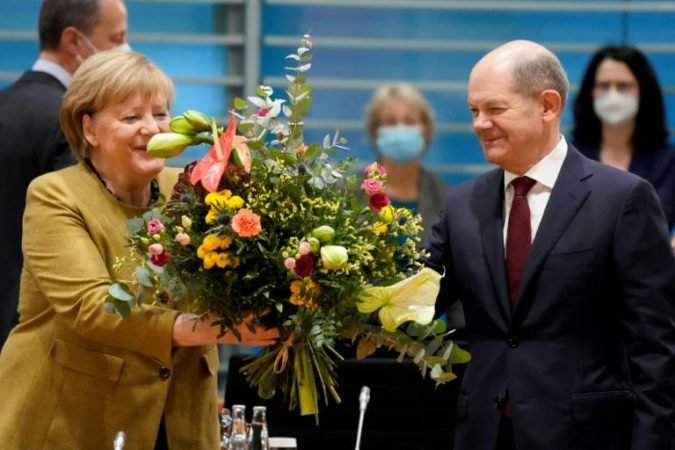 A centre-left-led alliance of parties on Wednesday announced a deal to form Germany’s new government, with surging coronavirus infections posing an immediate crisis for the post-Angela Merkel cabinet to tackle.

Two months after the Social Democrats (SPD) beat Merkel’s conservative CDU-CSU bloc in a general election, they concluded a roadmap on plans for Germany’s next four years with the Greens and liberal Free Democrats that will install Finance Minister Olaf Scholz, 63, as chancellor.

The relatively rapid accord is likely to be greeted with relief by international partners wary of a hamstrung Germany while crises from the global Covid emergency to Belarus and a weak economic recovery rage.

Within Germany, calls have grown for the new coalition to take swift action to curb a surging fourth wave of the pandemic as hospital beds fill up and new infections soar to record highs day after day.

In a sign of the urgency, Merkel, who is retiring from politics after four terms, summoned the new coalition’s top brass for pandemic talks Tuesday.

Scholz said his incoming government will set up a crisis team to fight the pandemic, and pledged to spend a billion euros ($1.12 billion) on bonuses for health workers in hospitals and care homes who have been on the frontlines of the crisis.

He voiced backing for compulsory vaccinations for health staff and said his government would “do everything necessary to bring our country safely through this time.”

But critics accused Scholz of lacking pace and passion in the national catastrophe.

“What he said … on the dramatic coronavirus situation was so correct and sensible that it sounded like he wanted to be the leader of the Hamburg health authorities,” snapped Spiegel online.

Climate protection also features prominently in the coalition accord, with the Greens getting their way on bringing Germany’s exit from coal forward to 2030 from 2038. A huge ramp-up of renewable energy is planned for sustainable power to make up 80 percent of electricity mix by 2030.

The FDP took home the pledge to reinstate the country’s constitutionally enshrined debt limit for 2023. And the SPD secured backing for their campaign pledge to raise minimum wage to 12 euros from the current 9.60 euros.

The thorny question of which party takes which ministry was also settled.

A new “super-ministry” grouping the portfolios of economy, climate protection and energy will go to the Greens, whose co-leader Robert Habeck will also likely be vice chancellor.

Annalena Baerbock, the Greens’ other leader, is set to become Germany’s next foreign minister — the first woman in the job.

The line-up hints at a Germany that could take a more assertive tone towards China and Russia, while economically it will stick to budgetary rigour and aggressively push green investments.

In Washington, a State Department spokesperson said the US expected ties to stay “incredibly close and effective”.

The swift pace at which the three parties — known in Germany as the Ampel or “traffic-light” after their colours — came together to defy expectations as the FDP is not seen as a natural partner of the centre-left SPD or Greens.

The 177-page coalition contract will now be put to the parties’ rank-and-file, which are expected to rubberstamp them, following which Scholz will be elected formally by MPs in the Bundestag, likely in early December.

Known for her steady hand steering Germany through the eurozone crisis, migrant influx and Brexit, Merkel is leaving office still widely popular with the German electorate.

Stressing continuity, she included Scholz in key bilateral meetings during the G20 summit in Rome in October including with US President Joe Biden.

When she met regional leaders of Germany’s 16 states for urgent talks last week on the pandemic, Scholz was prominently also in attendance.

She has also shrugged aside the fact that Scholz hails from a rival political party, saying she will be “able to sleep soundly” with him as chancellor.

Vote of confidence from Merkel aside, Scholz is an experienced hand, having been labour minister in her first coalition from 2007 to 2009 before taking over as vice-chancellor and finance minister in 2015.