1971 — The War Which Shaped The Subcontinent [Event] 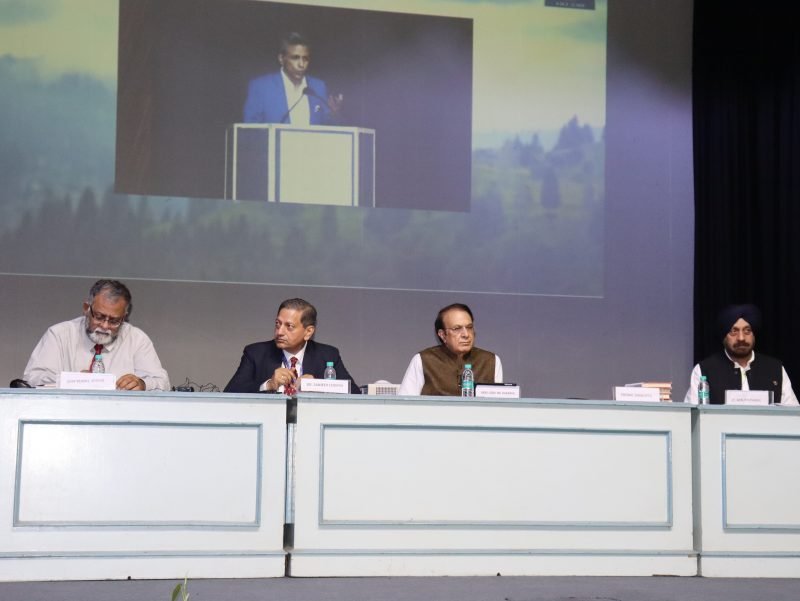 The event, which smacked of reminiscence for most, gathered together a number of military veterans of the 1971 war with Pakistan. With memories of the loss of their brother in arms, many veterans including a renegade of the East Pakistani army, Lt. Col. Quazi Sajjad Ali Zahir, who supported the Indian army’s war efforts in the 1971 war, talked about the gruesome war of 1971. There were veterans who carried the bloody mark of the liberation of Bangladesh, including Maj. Gen. Ian Cardozo, who lost a leg in the military campaign.

Yet emotions didn’t overwhelm the military veterans’ portrayal of the strategies used against the Pakistani army in Bangladesh. The event kicked off with some book releases including “A Western Sunrise: India’s War with Pakistan” by renowned military historian Shiv Kunal Verma, “Watershed 1967: India’s Forgotten victory over China” by Probal Dasgupta and “Yoon Janma Bangladesh” by V.K. Gaur.

The two-day event was packed with sessions on understanding what kind of state Pakistan is, which in power-politics parlance is considered like any other state, a unit of analysis. The common sense of the speakers at the event was that Pakistan is occupied with a certain kind of system called the military-industrial complex. Most of the army generals were of the view that Pakistan is a ‘garrison state’ and there can be no headway in conversations with Pakistan to stabilize relations. However, Ambassador TCA Raghavan stood out among the panelists including Lt. Gen. PJS Pannu, Lt. Col. Sajjad and Ambassador Pinak Ranjan Chakravarty, and drawing from his time as the High Commissioner of the Indian embassy in Pakistan, argued that Pakistanis are courteous in their behaviour and have a “goodwill about India”. He underlined that India-Pakistan relations can’t be victims of the past and the political leaders of the present must not yield to the past.

Some sessions like the one on “The Salience of Geography” dived into understanding the geographical fault lines that led to the creation of Pakistan. This session invoked theories of geopolitics such as Heartland theory and Rimland Theory. Every panelist including Maj Gen BK Sharma along with Dr Sanjeev Chopra, Shiv Kunal Verma and Aarti Tikoo Singh took a deterministic view of geographical fault lines, meaning geographical divisions that are driving the political dynamics of India-Pakistan relations.

Other sessions titled “Factors Drawing India into Conflict” made observations about how India inadvertently finds itself in the conflicts of its smaller neighbours. Some panelists like Lt Gen Ashish Singh and Lt Gen Nirbhay Sharma argued that India can’t deny the inevitability of its “big brother” stature in the South Asian region.

The most heartwarming session was on the Bangladesh liberation war, which included stories of gory violence and manslaughter witnessed by one of the panelists from Bangladesh Col. Sajjad Ali. In conversation with Lt Gen Vinod Bhatia and Ambassador Vikram Doraiswami. Col. Ali talked about his life as a renegade, and shockingly, carries a “death sentence valid till now”.

Other sessions focused on Indian and Pakistani perceptions towards East Pakistan (present-day Bangladesh). The panelists included Lt Gen PJS Pannu who was in conversation with Christine Fair and Ambassador Pinak Ranjan Chakravarty. Outlining the role of the deep state in Pakistan, Fair talked about the strategies that Pakistan used on East Pakistan.

The last session of the first day was bookmarked by a bilingual session, chaired by L.S. Bajpai. It was a moving session on the way Bangladesh was formed and the role of Mukti Bahini in the liberation. The session was focused on the discussion of the celebrated book by V.K. Gaur, “Yoon Janma Bangladesh”. Dr, Sanjeev Chopra pointed out that there is a lack of vernacular accounts on the India- Bangladesh war which was mirrored by V.K Gaur, one of the panelists and authors of “Yoon Janma Bangladesh”. Another panelist, Lt Col. B.B. Singh noted the frailties of Mukti Bahini and the popular perception that how the fighters of Mukti Bahinis were incapable and wanting.

The second day started with personal accounts of air and naval operations against Pakistan during the 1965 and 1971 wars. Air force veterans and navy veterans recounted their experiences of commanding the operations and hurdles that they faced. From the air force AVM Manmohan Bahadur, Sqn Ldr Rana Chinna narrated stories to the audiences and the conversationalist Jagan Mohan, Sqn Ldr Pushp Vaid respectively. The naval operations were narrated by Admiral Anup Singh and Admiral Shekhar Sinha who were both in conversation with Sandeep Unnithan.

Furthermore, another session on India’s global image during 1971 was portrayed by Ambassador Akbaruddin who was in conversation with Alok Bansal. Ambassador Akbaruddin underlined the fact that India’s campaign against Pakistan was overshadowed by an era of great power competition rather than great power cooperation. He pointed out that India’s efforts were criticized by almost every great power while smaller powers like Yugoslavia supported India’s war efforts. He also pointed out that India being a non-aligned nation provided it with greater flexibility during the great power competition of the Cold War.

Another interesting session hosted Sir Mark Tully, a noted journalist of BBC, based in Delhi. Sir Tully narrated his story as a non-partisan journalist who had reports from both India and Pakistan. He underlined the importance of independent journalism in a war situation. And most importantly doing “balanced reporting” in a situation of continued hostilities.

Contribution of Indian Cinema in Infusing Patriotism – Valley of Words 2021

The last day also brought in popular media to understand the role of media and film in inculcating nationalism among the masses. This included narration of stories by Maroof Raza and the discussion of the movie Border on 1971 war in presence of its director J.P. Dutta.

The Chief of Defence Staff, General Bipin Rawat, appreciated the support of Mukti Bahini and Col. Ali in the war against Pakistan. He said that Mukhti Bahini had set the stage for the Indian Army to achieve victory in such a short time and the war was fought in a coalition by the people of Bangladesh and the Indian armed forces.

He mentioned that “India’s intervention in East Pakistan was because of the tyranny that was imposed on the people of then East Pakistan by the Pakistan armed forces. Ten million refugees started pouring into India.” Recalling the five Paise stamps that were used to provide support for the food and shelter needs of the refugees, he mentioned that every Indian contributed to the war and not just the military. “At a time when India itself was surviving on PL-480 assistance, Indians had the courage to provide for the food and shelter of the refugees overflowing from Bangladesh because of the tyranny they were facing”.

While reflecting on the 1971 war, Gen. Rawat drew attention to the future of warfare. The war in Bangladesh was fought as a theatre battle. It was possible to form this theatre as the three forces had adequate time from April 1971, when the political leadership had given clear commands for the war, till December 1971 when the war was actually executed. Taking lessons from the war, he said that future wars, if fought, would also need the creation of theatres to carry out operations in a joint manner. The army, airforce and navy can no longer fight in individual silos.

With this valedictory address by General Bipin Rawat, the two-day event on the 1971 war was concluded.